Updated : March 26, 2019 05:25 PM IST
Union government to allow public sector Oil and Natural Gas Commission (ONGC) and corporate major Vedanta to facilitate a multi-billion rupee hydrocarbon project extracting fossil fuels along with methane, propane and butane from Kaveri Delta region.
Farmers say that no in-depth study has been conducted so far on the hydro-geological, socio-economic and environmental disturbances the project would create.
Along with hydrocarbon extraction, Kaveri delta is facing seawater intrusion owing to rising sea levels, rampant sand mining and over exploitation of ground water.

In Thiruvaiyaru, the famous village where Carnatic music legend Thyagaraja lived and died, river Kaveri looked almost dry and desolate. The subject of a never-ending water-sharing dispute between Tamil Nadu and Karnataka, the once perennial river has now turned into a sea of sand with rocks and bushes dotting the dry beds. This scene is not only limited to Thiruvaiyaru but also to the numerous Kaveri delta villages forming Tamil Nadu’s traditional rice bowl in the Thanjavur region.

“In his famous composition Sari Vedalina, the saint composer termed the Kaveri as a river that moved rapidly at one place, roared fearfully at another and remained still with full grace at a third. All that has been a thing of the past and the river now remains dry except for a few weeks during monsoon,” said Tamil playback singer Senthil Dass, standing near the samadhi of the music legend.

Hailing from Neduvasal in the Kaveri delta region, Dass is now the public face of a people’s movement to protect the river and the huge expanse of agriculture fields it supports not just from illegal sand mining and deforestation but also from a controversial move of the union government to allow the public sector Oil and Natural Gas Commission (ONGC) and corporate major Vedanta Resources to facilitate a multi-crore hydrocarbon project extracting fossil fuels along with methane, propane and butane.

Though Vedanta is yet to make its presence felt in the delta region, ONGC is already facing the ire of the farmers not only for the proposed project but also for the existing oil wells operated by it in the region in a way neglecting the environmental, agricultural and livelihood concerns of the people. As another Lok Sabha election is round the corner, all political parties in Tamil Nadu and Puducherry are competing with each other in convincing farmers of the delta region that they would not allow the implementation of the project which may turn the whole river ecosystem and farm lands as a desert. But the project that already created extreme fear in the minds of farmers who live close to the river. Hoardings exhorting people to disapprove those who are supporting the project can be seen in many places.

“The farmers are frightened. Just interact with them and you can feel their simmering anger in the whole delta region including Marakkanam, Cuddalore, Parankipettai, Velankanni, Kullanchavadi and Tharangampadi. Whatever be the promises of the political parties, the union government is keen on large-scale hydrocarbon extraction from the Kaveri Delta and that too mainly from prime agricultural lands. As far as the farmers are concerned, it’s a matter of survival in difficult times,” said Dass.

When contacted, a senior official of ONGC at its regional office in Karaikal confirmed that the country’s ‘largest vertically integrated oil company’ is leaving no stone unturned in increasing oil production. “We are acting as per the policy of union government which wanted at least ten percent import reduction in the case of oils. Hydrocarbon capture in the Kaveri river basin is one of our top priorities to increase production,” said the official who preferred anonymity.

Conceived in 2009, the Kaveri delta coal-bed methane extraction project is all likely to affect normal life in 667 square km area coming under Thanjavur, Nagapattinam, Pudukottai, Thiruvarur, Tiruchirappalli, Ariyalur, Perumbalur and Karaikal districts. Among them, Karaikal is part of Puducherry.

“As you know, the delta region is where the river divides into several smaller rivers depositing huge sediments in agricultural lands before flowing into the sea. Deltas are nature’s gift to agriculture because of the deposition of fertile sediments. What is the logic of initiating hydrocarbon mining in such a food producing area? Why the authorities are unconcerned of the environmental hazards to be created by coal-bed methane?” asked P.S. Masilamani, a farmers’ leader from Thiruvarur.

According to him, no in-depth study has been conducted so far on the hydro-geological, socio-economic and environmental disturbances the project would create. “If implemented, the project would not only destroy agriculture but also deny potable water to a large segment of the society,” he said. Other than water depletion, the farmers fear possible chemical and radioactive contamination. 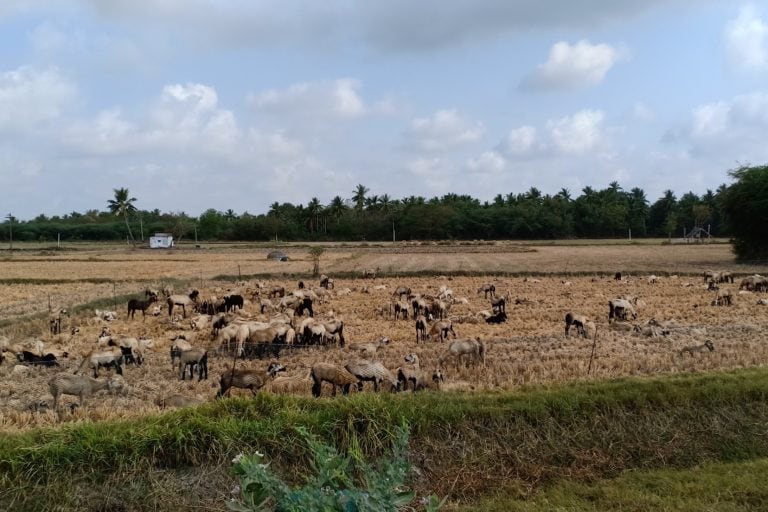 A dry farm near Thanjavur. Photo by Siby Pulpally.

An eerie silence prevailed in Neduvasal when Mongabay-India visited it. This delta village, located about 60 km from Thanjavur, had witnessed large-scale resistance against the project and its oil wells in the last three years.

“We are waiting and watching. There is no question of allowing any oil well in any part of our region. We are categorical that hydrocarbon mining means disaster,” said M. Madhavan, who cultivates vegetables in 15 acres of land.

According to Alamelu Ramanathan, a woman farmer of the locality, people are on extreme vigil against any attempt of mining in the region. An exploratory well dug in 2008 can be seen in Neduvasal and farmers say ONGC used to burn gas night and day after digging the well. “On occasions, the gas burned orange with black smoke. We have been frightened since then,” said farmer Sellakkannu Vellachamy.

Within 100 km from Neduvasal, ONGC operates about 200 oil wells and a number of other installations. In three successive years since 2010, crude oil leaked from underground pipelines running through paddy fields in Nagapattinam, damaged crops and contaminated groundwater.

In Kathiramangalam village near Thiruvidaimarudur, there was a major oil leak from an ONGC pipeline last year. Police had to resort to lathi charge to disperse protestors. The local oil well remains dysfunctional since then due to public protest.

“We are paying the price for the last year’s protest even now. Police are not allowing outsiders to stay in our village saying they would help ignite more protests against oil exploration,” said K. Vijay, a local resident. Water sources in the village contain yellowish water with layers of oil over it.

In Okkur near Nagapattinam, people are protesting against the noise and air pollution caused by the exploratory well now under construction. “Fields damaged by oil leaks are never restored by ONGC. Farmers get meagre compensation after passing through a huge process. Lands scarred by oil take years to recover,” said R. Ram Kumar, leader of the Anti-Carbon Mining Action Committee.

According to ONGC officials, of the 36 lakh acres of agricultural land in the Kaveri basin, the company is exploring only 1,600 acres and that there is no threat to agricultural activities due to extraction. However, the company did not present any data on water quality to counter claims of contamination. The bus stop at Neduvasal village. Neduvasal has been the epicentre of farmers’ protests. Photo by Siby Pulpally.

“An unbearable stench came out of the site when the exploratory and extraction works were undertaken in our village. We fear the wells would create severe hurdles to our lives and livelihoods,’’ said Baby Sannasi, a woman farmer of Neduvasal East.

ONGC claims that in areas where the exploratory wells failed, the land was returned to ‘original owners in original condition’. But farmers say the returned lands remain uncultivable because of the contamination of soil and water.

According to local communities, crude oil that spilled on farmlands contains benzene, xylene and toluene, and other toxins. Benzene is a carcinogen and can contaminate groundwater reserves.

“Carbon extraction is the latest threat that the delta is facing. Sea water intrusion owing to rising sea levels, rampant sand mining and over exploitation of groundwater are also killing the region,’’ said K. Dakshninamurthy, president of Neduvasal Grama panchayat.

“Access to clean water is our right. Whenever I visit villages where water floating with oil, it feels like we are feeding our children with poison,” he emphasized.