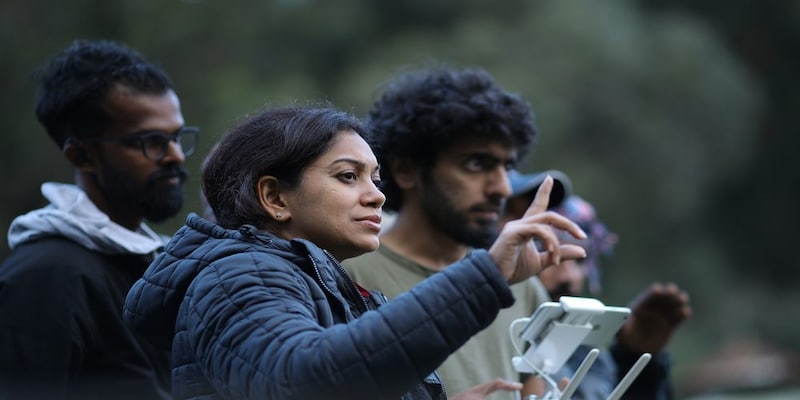 At a time when the Malayalam film industry is making national news for a top actor’s alleged misdemeanours with a woman colleague – and the accompanying Pandora’s box of misogyny and chauvinism it has opened – one woman filmmaker’s name and tall standing comes as a welcome contrast.

With four critically acclaimed feature films under her belt, including the latest Koode which released this July, Anjali Menon has a formidable standing amongst her peers. It has been earned not just by her hard work and intense training but also with her ability to encapsulate complex, larger ideas into a cinematic language anyone can understand.
Born to a Malayali business family and raised in Dubai, Anjali first discovered her love for cinema while doing her Masters in communication from University of Pune. “The film component of the course really drew my attention,” says the National Award winning screenwriter, who frequently speaks at Indian and international forums and is a newspaper columnist as well. Anjali Menon
Drawn to her calling, and unfazed by the low numbers of women in the field, Anjali did her Master’s in art and technique of filmmaking from London International Film School, and went for various directing and screenwriting workshops in US and UK. Having set up her company, Little Films India, in Mumbai in 2006, she went on to participate in an anthology film Kerala Café along with nine other co-directors, which premiered in Abu Dhabi in 2009.
Her debut feature film as a director and screenwriter left moviegoers and critics stunned. “Manjadikuru is unforgettable,” vouches Alekh SV, a 24-year-old mechanical engineering student from Pattiam in north Kerala. Drawn from Anjali’s own ‘reverse immigrant’ experience, Manjadikuru is set in the late 1980s, and follows a 10-year-old boy who arrives at his ancestral home in rural Kerala to attend his grandfather's funeral.
To Malayali audiences, who value story and plot above all else, the film was tremendously fulfilling. And Anjali kept the bar high with the second one, Ustad Hotel, for which she did the screenplay and the third, Bangalore Days, which she was director as well as screenwriter. Released in 2014 with English subtitles, Bangalore Days is considered one of the biggest box-office successes of Malayalam cinema, and earned Anjali a spate of awards, putting her firmly on the global map. “Anjali has added freshness to Malayalam cinema,” says Alekh. “She has given young people a lot of aspiration and hope. We look forward to her films because we know each one will be completely different – not just from her own previous films, but from anything anyone has ever seen.”
The most interesting thing about Anjali’s films is the way she introduces a larger world view through her characters. The men in her films are respectful of women and broadminded about relationships, and the women are as complex and carefully etched out as men in traditional Malayalam cinema.
“Off-screen, you’ll hardly see the kind of men you see on-screen in Indian movies. And on-screen, you’ll hardly see the kind of women you see off-screen,” says Anjali wryly of a balance she’s trying to correct. It’s an important perspective that is much needed in the Malayalam film industry, which was rocked by a shocking rape case of an actress last year.
Allegedly abducted by goons hired by top film star Dileep, the disappointing fallout to the case – Dileep got bail and was reinstated to the Association of Malayalam Movie Artists to much furore by women’s groups – led to the establishment of Women in Cinema Collective (WCC), of which Anjali is a part.
“WCC’s role is to empower,” she says. “It’s a support structure for those who need it. Such advocacy can be the corrective factor in the industry here, just as the Women in Films organization has been a significant factor in correcting gender bias in films abroad.”
Her latest film Koode looks at another angle to sexual harassment – to that of young boys. Without explicit details, the film shows the impact to the lead character’s later life. “The most delicious cinema is that which can be interpreted,” avers Anjali, who idolizes filmmaker Gulzar for his “beautiful, timeless, poetic” films.
Koode is a visually emotional experience, unlike Anjali’s past films that were heavy on dialogue. “I felt I was getting too dialogue-reliant. I like to push myself in different directions,” explains Anjali, whose six-year-old son often travels with her for shoots.
The most touching moment for Anjali during the shoot of the film was a scene that depicts the lead character, actor Prithviraj Sukumaran, who plays a blue-collar worker in Dubai’s oil industry, travelling in a bus with others of his ilk. “The extras weren’t actors, they were real workers. Their faces tell the real back story – I didn’t even have to direct them. I felt privileged and humbled to be able to capture their truth – it was a special moment for me,” she recalls.
Inspired by such connections and emotive experiences, Anjali doesn’t like being characterized as a ‘woman filmmaker’, and wouldn’t say that hers is a ‘female gaze’. “Gender is not binary; it is a spectrum. Having said that, we do need more sensitivity our films, and we need more individuals with higher levels of sensitivity in cinema as a whole.”
While some may say she, like her idol Gulzar, is in a genre all by herself, Anjali brushes it off in her characteristic down-to-earth way. “I still have a long way to go.”
Aekta Kapoor is editor and publisher, eShe magazine.
First published in eShe magazine
Check out our in-depth Market Coverage, Business News & get real-time Stock Market Updates on CNBC-TV18. Also, Watch our channels CNBC-TV18, CNBC Awaaz and CNBC Bajar Live on-the-go!