Updated : April 19, 2019 05:33 PM IST
Apart from making people homeless, the erosion of lands has also triggered a livelihood crisis in agrarian Assam.
With the Lok Sabha election, the victims of erosion have demanded the political party leaders chalk out a clear roadmap to solve the problem of erosion and rehabilitation of affected people.
The Congress and BJP in their political manifestos for the 2019 Lok Sabha polls have also included the issue of land erosion and floods of Assam. However, there is no detailed plan on how the parties are going ahead to solve the crisis.

With the monsoon setting in, 69-year-old Rahim Khan is worried.

Monsoon rains swell the rivers in Assam and it worries people like Khan and lakhs of others who have been living along the riverbanks since generations. Although these people have learned to live with the waters, erosion of river banks continues to make them homeless and deprives them of their only livelihood option—agriculture.

Khan and his family, who were farmers tilling their land and cultivating different crops throughout the year, have now been reduced to mere daily wage earners. The 32 bighas of land the Khans used to own in Balapara char in Barpeta district, located about 100 kms from Assam’s capital town Guwahati, have already been eaten up by the hungry tides of Brahmaputra river. Bigha is a traditional unit for land measurement in India, equalling about 0.13 hectares.

“My forefathers were farmers and so am I. Three of my sons were also engaged in farming in the 32 bighas of land that I inherited from my father. However, we have lost all the 32 bighas in the last 30 years. The river has been very kind to us all along, but things have changed. The amount of land erosion has increased in the last few years,” said Khan. 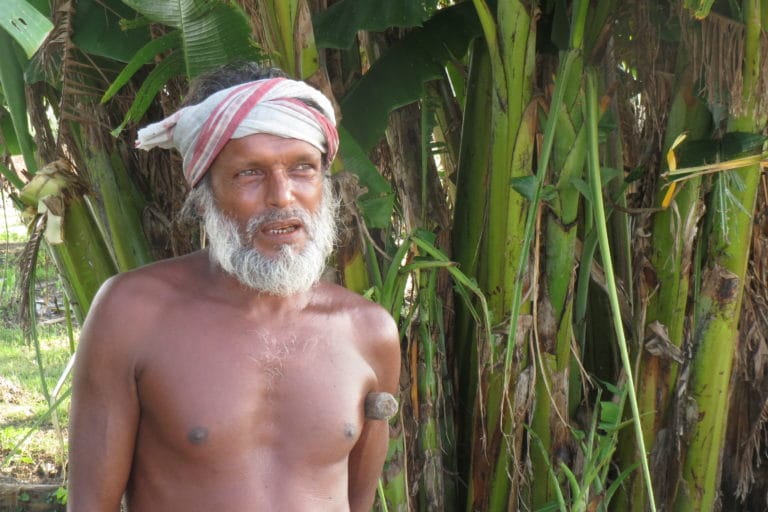 Rahim Khan, a resident of Balapara char in Assam’s Barpeta district. Khan lost 32 bighas of his agricultural land due to erosion in the last 30 years. Once a farmer, Khan and his sons now work as daily wage labourers. Photo by Anup Sharma.

All the major political parties in the country are busy building strong narratives to attract the voters, thanks to the ongoing Lok Sabha elections. While the BJP is seemingly building the narratives on patriotism and security of the country, the Congress, on the other hand, is trying to highlight unemployment and farmers’ distress to woo the voters.

However, far away from India’s power centre in capital New Delhi, where these narratives are being constructed, lakhs of people in different districts of Assam are worried about the approaching monsoon which will swell the rivers rendering thousands of people homeless and landless.  According to Assam government data discussed in the legislative assembly’s October session in 2018, a total of 4.27 lakh hectares of land have been lost due to erosion in Assam—the state loses an average 8,000 square km land to the erosion of river banks every year.

Different political parties in Assam have included the issue of river bank erosion in their manifestos, but the affected people are yet to be convinced about the assurances. Protection from river bank erosion and rehabilitation of people affected by this has always found a place in manifestos ahead of the polls, but the tragedy continues every year. The problem has increased in the recent past due to climate change which resulted in erratic weather patterns in this part of the country. A portion of Singora river in Assam’s Lakhimpur district. People living along the banks of the river use these bamboo poles hoping that they could obstruct the land from getting eroded. Photo by Anup Sharma.

“The change in temperature and patterns of rainfall in the northeast indicates that climate change impacts are there in Assam and other parts of northeast along with the rest of the world. This change in the rainfall pattern has led to the recent volatility of the rivers. The Himalayas are also fragile mountains and more rainfall triggers erosion. Besides, the northeast region is also located on Seismic Zone V and hence witnesses regular seismic activity beneath the earth, which also leads to erosion,” said Partha J Das, who heads the Water, Climate and Hazard (WATCH) division of Aranyak, a biodiversity and conservation organization.

“There has been a negative impact of climate change on the rivers. The erratic climate conditions have led to the severity of impacts like erosion and sedimentation on agricultural lands, which have made people homeless and compounded the problem by triggering livelihood crisis among affected people,” said Dhrubajyoti Saharia, a professor in the geography department of the Gauhati University.

Place changes, but the narrative does not

Over 500 km away from Barpeta, Diganta Pegu, a resident of Dhakuakhana subdivision in eastern Assam’s Dhemaji district is also worried due to the approaching monsoon. Pegu, who belongs to the Mising community, does not know Rahim Khan, but they are both faced with the same fear of riverbank erosion.

“I have been shifting with my family from one place to another. Originally we were from Majuli Island but I lost my home and paddy fields in 2007 due to erosion by the river Brahmaputra. Every year there was erosion, forcing us to move inbound in the Majuli Island. In 2007, I lost the house forcing us to shift to Dhakuakhana in 2010. I am living here now but I am not sure how long I’ll be here. The erosion of the banks are taking place at a faster pace,” said Pegu, once a resident of one of the world’s largest river islands, Majuli island. 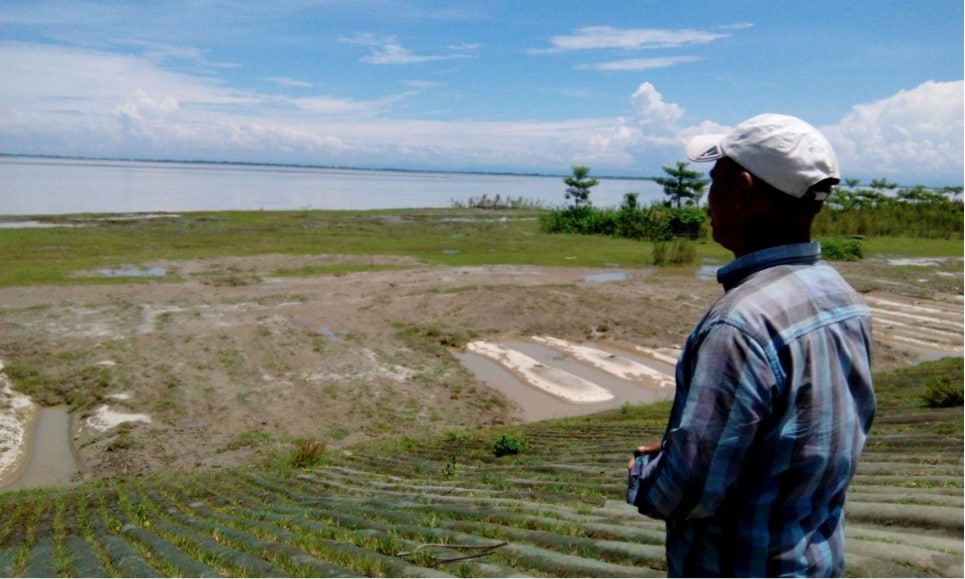 Diganta Pegu of Dhakuakhana area in Assam’s Dhemaji district has also lost over 20 bighas of land due to erosion in Majuli Island. Deprived of any rehabilitation or compensation, Pegu shifted to Dhakuakhana in 2010 and now earns his living by working as a daily wage labourer. Photo by Anup Sharma.

The Island which is home to different communities, predominantly Mising tribes, used to extend over an area of 880 square kilometres at the beginning of the 20th century. Erosion of riverbanks has significantly reduced the landmass of the Island, bringing it down to 524 square km in 2016.

Barpeta is not the only district facing the problem of erosion. Most of the 29 districts in Assam are witnessing erosion and the problems have increased year after year with the change in the climate. The rise and fall in temperature had led to a change in weather patterns and affecting the hydrology of the rivers.

“We are living near the rivers since generations. But the rivers are changing. The pace at which the banks are eroded by the rivers now is quite more than earlier. I don’t know where I’ll be heading if I had to vacate the place where I am living now,” said Pegu, who works as a labourer in Dhakuakhana these days to earn his livelihood.

Once a farmer growing two crops on his land, Pegu now earns Rs. 250 a day working as a daily wage labourer. “It’s difficult to sustain a family of five. Work is not regular and sometimes there is no work at all for days,” said Pegu.

The Brahmaputra is not the only river that affects the people in terms of erosion. Most of the tributaries of the mighty river swell during the monsoon and erode vast tracts of lands every year, rendering lakhs of people homeless.

“When we were young, the river was far away from our village. I remember walking for quite a distance to see the river from my home. However, things are changing with time. Since 2005-2006, the river has been eroding huge areas every year and we have lost over 15 villages over the last 12 years. I have been living with my family in this Ghagar ghat since I lost my home and paddy fields in 2006,” said Sushanta Mili, a Mising youth and a resident of Ghagar Alimur village In Assam’s Lakhimpur area, which was submerged in the Subansiri river.

“There are hundreds of people like us. We have been appealing to the government to rehabilitate us, but nothing has happened so far,” said Mili, who now runs a small shop selling tamol paan (areca nut and betel leaf), bidis, cigarette, etc. at Ghagar ghat to people who come to board the ferry from the ghat. 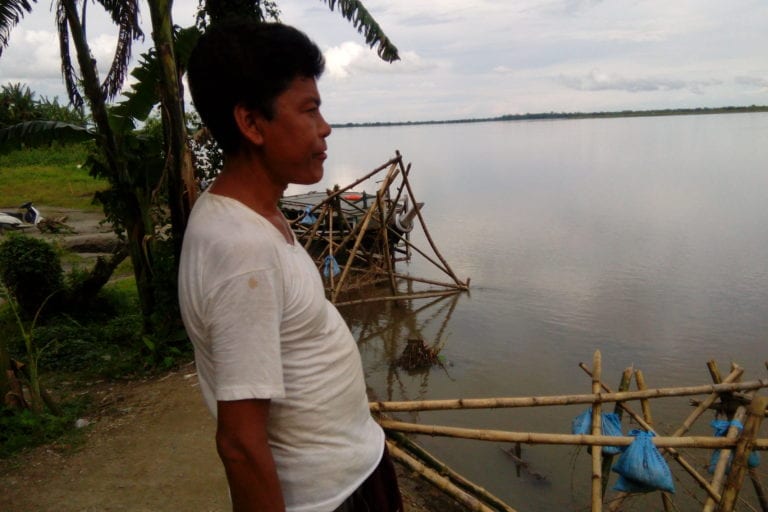 Standing near the Ghagar ghat along the Subansiri river, Sushanta Mili often remembers his original village which is in the middle of the river now. Photo by Anup Sharma.

Is erosion a political issue?

Erosion of riverbanks has been a political issue in Assam for a long time. Every political party assures that steps will be taken to stop the annual flood and erosion problem. However, nothing happens in reality and the problem continues, adding to the woes of the people.

“The Congress government told us that we would be rehabilitated in other areas. The party was in power for 15 years in Assam but did nothing for us. After we lost our house to erosion in 2007, we lived on the embankments for about three years waiting for the government to rehabilitate us somewhere else and allot us land to cultivate and start life afresh. However, nothing happened. I did not even get any compensation as the government official wanted land documents. We have been farming on the lands near the river since ages and there was no need for any document—that’s how we lived. Now from where I can produce a document that I have lost 20 bighas of agricultural lands?” asked Pegu.

The Congress and BJP in their political manifestos for the 2019 Lok Sabha polls have also included the issue of land erosion and floods of Assam. However, there is no detailed plan on how they are going ahead to solve the crisis. Not everyone has land documents

The problem for most of the tribal people in the state is lack of land documents.

“The government had failed to do the cadastral [land] survey since the 1960s, which has led to the chaos. The government is not aware of how much land of what category lies across the state. Millions of people have over the years applied for getting their lands titled (myadi patta), but the applications are lying with the departments for various reasons,” said Advocate Kishore Kalita, who has been studying the problem of land ownership patterns in Assam.

“The BJP led government which came to power in Assam in 2016 also assured to grant land pattas to the indigenous communities. However, two and half years have passed, but only a few families in certain districts have got land pattas (title land) while applications of thousands of people for getting their land pattas are gathering dust in the government offices across the state,” said Kalita.

The Brahmaputra river originates from the glaciers of northern Tibet and is one of the most important trans-boundary rivers of Asia that flows through China, India and Bangladesh. With an estimated average discharge capacity of 19,800 m3/s, the river is a lifeline for millions of people of these three countries.

While the agrarian economy of the people living on the banks of the mighty river relies on the annual flood that brings vital nutrients to the floodplain soils, the river has also had a negative impact on the people by eroding large areas of land over the years and depositing enormous amounts of sands into the paddy fields, making it difficult to cultivate.

Living on the edge, these erosion-affected people are now looking to the forthcoming Lok Sabha elections and candidates contesting the polls and hope that the serious steps are taken by the next government to stop river bank erosion in Assam.