Updated : March 21, 2019 04:44 PM IST
A women’s group in Odisha has been guarding a forest for close to 20 years in the aftermath of the devastating 1999 supercyclone.
The women have a system of rotational patrolling to guard the mangrove and casuarina forest from potential timber smugglers and woodcutters.
A 2019 study by Jadavpur University researchers highlights that in coastal Odisha districts, the risk of severe cyclones ranks above heavy floods.

For close to 20 years after a supercyclone ravaged Odisha, a group of women along the coast has been standing sentinel over their beloved storm-shielding forest and mangrove cover.

Deftly swinging and beating their sturdy bamboo sticks, 75 women in Gundalba village in the famed temple district of Puri in the Mahanadi delta, have been taking turns to literally blow the whistle on potential timber smugglers and tree cutters in this sandy strip of the coastal woodland.

“We beat our sticks and keep vigil in groups of 10. We spread out inside the forests and blow whistles. Anyone with an intent to harm the local biodiversity flees on hearing our whistle and the banging of our sticks on tree trunks,” 52-year-old Charulata Biswal told this visiting Mongabay-India correspondent about their rotational patrolling or “thenga pahal.”

Biswal is the secretary of the Pir Jahania Van Surakhya Samiti, nurtured by women who came together voluntarily in response to the devastation after the 1999 Odisha supercyclone battered the northern Indian Ocean.

In 2012, the group won the maiden UNDP India Biodiversity Award in the community stewardship category for their efforts to rejuvenate the natural heritage of their village.

Skirting past the feathery branches of the casuarina and low spreading cashew trees, Biswal and her group point out the sea, just half a kilometre away from the village, located along the Astaranga beach in the state’s Puri district.

The calming sound of waves gently lapping the shore near the Pir Jahania shrine and the gorgeous sunflower fields belie the destruction unleashed by the cyclone on October 29, 1999.

“All of India and the rest of the world knows about the cyclone. Our homes and standing crops were destroyed and the casuarina plantations were affected. The soil had turned saline. There was no food for days and our children had no clothes to put on,” recalled Biswal.

“But we realised that it was because of the surviving forest (including the mangrove species) that we were still alive. We pledged that we will protect the forest in return and restore the biodiversity,” said a resolute Biswal.

Narrating the inception of the protection squad, Biswal said 70 women came together in 2001 to form the women forest protection committee with representations from every household to revive and manage the biodiversity of the 75-hectare forest area. The village, close to the Devi river mouth, now has 103 households.

Men had a supporting role in the Samiti’s initial days but now it has evolved to include male members, primarily the spouses of the women torchbearers, explained Sovakar Behera, honorary wildlife warden of Puri, who has been assisting the group in its biodiversity management initiatives. A women’s group in Odisha has been guarding a forest for close to 20 years in the aftermath of the 1999 supercyclone. Photo by Sahana Ghosh/Mongabay.

“The men were busy shoring up supplies, rebuilding houses and re-establishing livelihood in the aftermath of the supercyclone. The women took it upon themselves to take care of the natural resources,” Behera told Mongabay-India. It is the women who make up the protection and monitoring squad to look after these resources.

“We go for rotational patrolling twice a day. After wrapping up our daily chores we do one round of monitoring from 7.30 am and then return to our homes. After our lunch and ensuring the house is in order, we again leave for the late-afternoon vigil,” a beaming Biswal said.

But don’t they feel scared in the jungle?

“No, why should we? The forest is an extension of our home. Though we do not have rights over it we still feel protective towards it,” elaborated Biswal, likening each tree to a child.

“Won’t it hurt to see your children suffer? This is how a mother feels and for us, the trees are our legacy and we are doing something that comes to us naturally,” Biswal added in modesty. It also gives them a chance to catch up on what’s going on in each other’s lives.

The vigilantes use mobile phones these days to alert one another.

“We have caught several people over the years and several cases have been lodged against those indulging in illegal activities. Sometimes we have had to use our sticks to threaten these thieves,” said Rahima Bibi.

The members of the committee formulated and passed resolutions for a set of regulations for the management of the forest, including practices that help them avoid conflicts with neighbouring villages who depend on the same patch of forest for their stock of firewood.

For instance, the women’s committee has fixed one day each month during which all the households in the village are allowed to collect fuelwood from the forest.

Neighbouring villages gather firewood on a fixed, different day (usually after three or four days after the villagers of Gundalba have collected).

“We cooperate with the forest department as well but we do realise that department officials come and go so we are in command of our own vigilantism,” beamed Rahima Bibi also emphasising on the unity between the Hindu and Muslim communities.

At the outset, the women invested time and energy in generating awareness on the importance of the forest cover, said Behera, elaborating on the role of the mangrove forest as a bio-shield. They essentially pose as wind-breakers.

“The casuarina trees and other species stop the salt-bearing wind from entering the agricultural land and also thwarts the advance of moisture-laden wind from wreaking havoc on farms. The mangroves also prevent soil erosion along the coastal belt and overall the forests preserve the wildlife,” Behera said.

In the supercyclone, around 30,000 casuarina trees were uprooted. Mangroves were inundated, the women said.

“About 70 percent of the tree cover was lost in the supercyclone. The mangrove leaves had started decomposing but their roots were intact and local community members started salvaging the decomposing mangrove plants and still-standing casuarinas as also native species,” Behera elaborated.

“Gradually the forest came back to life. Birds started nesting and we heard bird calls once again. Now the deer are so many in number that they sometimes they raid our crops,” said Biswal.

Biswal and Rahima Bibi underscore that the recovering forest has made their village more liveable. 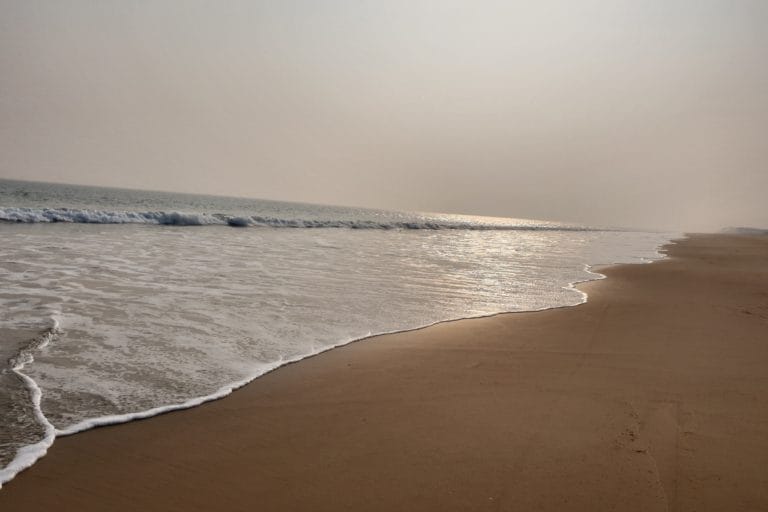 “One section of the village that is close to the forest has freshwater. This is because the mangroves and other tree species prevent intrusion of saltwater. Our agricultural fields are safe from the influence of storm surges and ferocious winds,” said Rahima Bibi.

The committee is confident that it is well-prepared to tackle disasters.

“Our experience from the 1999 cyclone has taught us that the villages that were shielded by mangroves had better protection from the disaster. We are now preparing to register our group with the forest department for community forest management,” said Biswal.

Rahima Bibi and others are also aware of the legacy of cyclones in Odisha.

According to a study that analysed 122 years (1877–1998) of tropical cyclone frequency in the north Indian Ocean, approximately four times as many tropical cyclones occur in the Bay of Bengal compared to the Arabian Sea.

Cyclones occur most often in May, October and November, with an average of five to six tropical cyclones every year.

In the 122 years studied, the frequency of tropical cyclones in the Bay of Bengal during November has doubled.

Cyclonic flooding in the Bay of Bengal is associated with storm surges, high tides and high water levels due to the heavy rainfall.

A 2019 study by the School of Oceanographic Studies at Jadavpur University highlights in coastal Odisha districts, the risk of severe cyclones ranks above heavy floods. Agriculture, the main livelihood of these districts (71 percent) is impacted adversely making the Mahanadi delta community vulnerable to such extreme events.

Biswal added: “Now it up to the younger generation to join in and help us create a legacy that can work towards better management of resources in the future.”