What HUL Q1 results tell you about consumer demand

What HUL Q1 results tell you about consumer demand

While HUL’s domestic volumes grew 5 percent in the first quarter, margins were led higher by a shift to new accounting standards and scaling back on ad spends

FMCG major Hindustan Unilever reported an in-line performance on most parameters for the quarter ended June 30. However, there was nothing to write home about in terms of demand sentiment. While the company’s domestic volumes grew 5 percent in the first quarter, margins were led higher by a shift to new accounting standards and scaling back on ad spends. HUL’s management commentary indicated a near-term demand slowdown. In its press briefing, the company said rural growth is now at par with urban growth. That showed a slowdown from a few quarters ago when rural markets growing at 1.3-1.4X urban growth. In fact, it is a fair distance from the good times where rural would grow as much as 1.6-1.7X urban growth too. Weak consumer sentiment was also witnessed in the company’s assessment of Personal Wash category’s performance. The Personal Wash space, HUL said, saw a muted delivery, particularly in the popular segment.
What management said?
In Q1FY20, Hindustan Unilever spent less on advertising as a proportion of its overall sales. There are only two reasons for a giant like HUL to hold back on ad spends: (i) cost cutting; (ii) weak response to advertising. This time around, the latter seems more likely given benign input cost environment as crude is off its recent highs and the Indian currency is off recent lows.
What explains +250 bps YoY jump in EBITDA margins?
But all isn’t lost from the great Indian consumption story perspective. HUL did say the premiumisation trend in Personal Wash continued and the response to new and innovative products in Liquid Wash and Foods has been encouraging. Once the monsoon picks up, the rural economy is expected to start thriving again, further boosted by the government's thrust on the rural economy in the Union Budget. It is now a matter of when the PM Kisan Yojana’s hand-outs start resulting in a higher appetite for soaps and shampoos.
What's next?
From an HUL stock standpoint, however, consolidation with GSK Consumer will be the next big trigger as it is a deal that is expected to be EPS accretive with margins synergies of 1000 bps. Even after 10 percent cool-off from the peak, HUL trades at 53X FY20e and 45X FY21e, so there is little room for error. 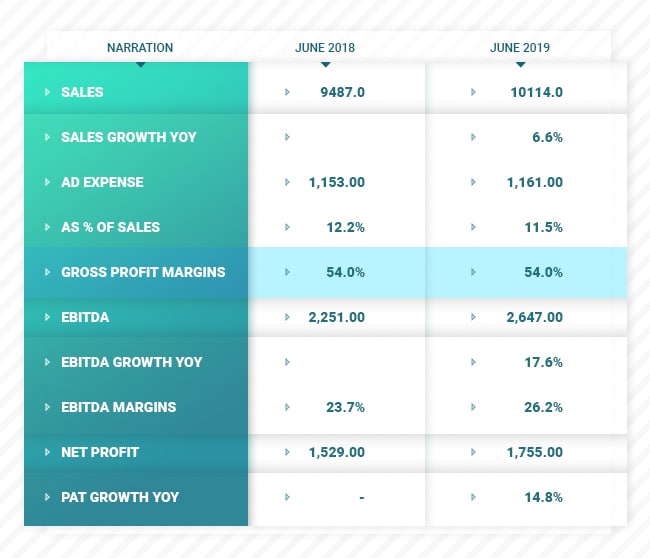