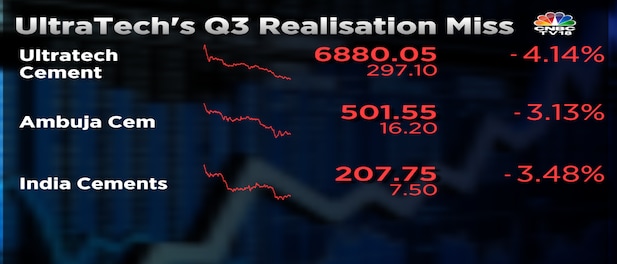 UltraTech also believes that the overall cost trend for the sector is likely to remain elevated.

TRADE
UltraTech Cement is the top loser on the Nifty 50 index on Monday after the company's realisations missed expectations in the December quarter. The miss has also taken shares of stocks like India Cements and Ambuja Cements lower.

For the December quarter, UltraTech's realisations grew only 0.2 percent compared to the September quarter. The street had anticipated a growth of 2 percent. However, grey cement volume growth remained healthy, growing 13 percent from last year.
The management maintained that cement prices will remain stable but fell short of giving a concrete guidance on major price hikes. They did say that demand has been on a solid footing and is expected to remain strong.
UltraTech also believes that the overall cost trend for the sector is likely to remain elevated. For the December quarter, revenue was above expectations of a CNBC-TV18 poll, while EBITDA and net profit were marginally lower.
CLSA also called the realisation miss disappointing and said that the outlook for the company beyond the March quarter will be the key to watch.
Morgan Stanley has retained its overweight stance on UltraTech and says it is the brokerage's preferred pick based on a multi-year demand cycle expectations, which will drive an expansion in margin and return ratios.
Jefferies said that growth in costs was moderately higher than estimates and is a likely reflection of high-cost inventory still being with the company, even as spot fuel costs are trending lower.
Out of the 47 analysts that track UltraTech, 42 have a "buy" recommendation, two say "hold" while three have a "sell" rating on the stock.
Shares of UltraTech Cement are trading 4.1 percent lower at Rs 6,883.35, while those of India Cements and Ambuja are also trading with losses of 3.5 percent each.
Check out our in-depth Market Coverage, Business News & get real-time Stock Market Updates on CNBC-TV18. Also, Watch our channels CNBC-TV18, CNBC Awaaz and CNBC Bajar Live on-the-go!