The company follows the October-to-September financial year. For the fourth quarter of Financial Year 2022 ended September 30, Siemens Ltd registered revenue from continuing operations of Rs 4,237 crore, an 11 percent increase over the same quarter in the preceding year, it stated.

Siemens on Tuesday reported a 23 percent rise in its net profit from continuing operations to Rs 392 crore in the September 2022 quarter, mainly on the back of higher revenues.

”(In July-September quarter) Profit after Tax (net profit) from continuing operations of Rs 392 crore, increased by 23 per cent over the same period last year,” a company statement said.
The company follows the October-to-September financial year.
For the fourth quarter of Financial Year 2022 ended September 30, Siemens Ltd registered revenue from continuing operations of Rs 4,237 crore, an 11 percent increase over the same quarter in the preceding year, it stated. 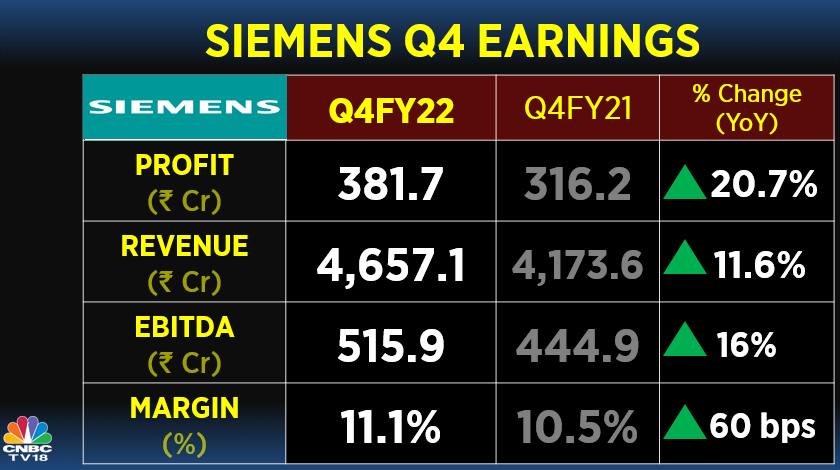 New Orders from continuing operations stood at Rs 4,009 crore, registering a 25 per cent increase over the same period last year. The company’s order backlog from continuing operations is Rs 17,183 crore, it noted.
For the Financial Year 2022, Siemens reported an increase of 43 percent in new orders, 18 percent in revenue and 20 percent in profit after tax from continuing operations over the previous financial year, it stated.
Sunil Mathur, Managing Director and Chief Executive Officer, Siemens Limited, said, ”The company’s strong performance showed the resilience of all our businesses, which performed remarkably well. We continue to see an increased pace of tendering for Capex by both public and private sectors with increasing interest in digital and sustainability solutions.”
The board in its meeting also approved a dividend of Rs 10 per equity share of Rs two each (500 percent) for the financial year ended September 30, 2022.
Also read: Vedanta board approves interim dividend of Rs 17.5
The dividend, as recommended by the Board of Directors, if declared at the ensuing annual general meeting (AGM) of the company, would be paid from Friday, February 17, 2023.
The Board of Directors, based on the recommendation of the Nomination and Remuneration Committee, recommended the appointment of Deepak S Parekh as a Director (Non-Executive Non-Independent; liable to retire by rotation) with effect from January 30, 2023, to the members for their approval.
Parekh’s second term as an Independent Director of the company is up to January 29, 2023.
The board also noted that Johannes Apitzsch has tendered his resignation as Director of the company with effect from January 1, 2023, due to other commitments.
Also read: The IPO lock-in period of these five companies ends this week
Check out our in-depth Market Coverage, Business News & get real-time Stock Market Updates on CNBC-TV18. Also, Watch our channels CNBC-TV18, CNBC Awaaz and CNBC Bajar Live on-the-go!