Reliance Industries will report its financial results for the July-September period on Friday, October 21. Investors will closely watch the performance of the conglomerate's oil-to-chemical (O2C) business.

Reliance Industries Ltd (RIL) is all set to report its financial results for the July-September period on Friday. Analysts in a CNBC-TV18 poll expect the oil-to-telecom conglomerate to report a 5 percent rise in revenue to Rs 2.3 lakh crore for the July-September period compared with the previous quarter.
The analysts peg the company's operating margin to come in at 14.02 percent for the three-month period. They estimate its quarterly profit at Rs 15,721 crore.
Investors keenly await Reliance's quarterly earnings report for domestic cues, as the stock of the country's largest company by market value has lost 12.6 percent of its value since in recent peak in late April — a period in which the benchmark Nifty50 index has risen 2.7 percent.
However, it has outperformed the market with a rise of 5.7 percent so far this week, as against the Nifty's gain of 2.7 percent.
Analysts expect weakness in its oil-to-chemical (O2C) unit, which could impact the company's overall earnings in the three-month period owing to a windfall tax on fuel exports and lower demand.
The O2C business accounted for almost 57 percent of Reliance Industries' total revenue in the year ended March 2022. 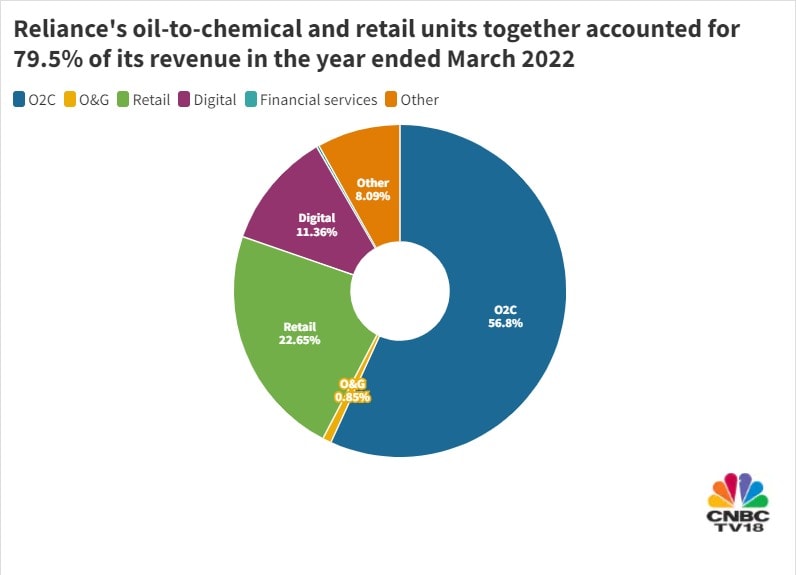 According to Nomura, Reliance's gross refining margin — or the money earned by refining each barrel of crude oil into fuel products — is likely to decline to $11 per bbl in the September quarter, as against $18 a barrel in the previous three months and $12.8 a barrel in the three months ended March 2022.
Network18, the parent company of CNBCTV18.com, is controlled by Independent Media Trust, of which Reliance Industries is the sole beneficiary.
Check out our in-depth Market Coverage, Business News & get real-time Stock Market Updates on CNBC-TV18. Also, Watch our channels CNBC-TV18, CNBC Awaaz and CNBC Bajar Live on-the-go!
Tags