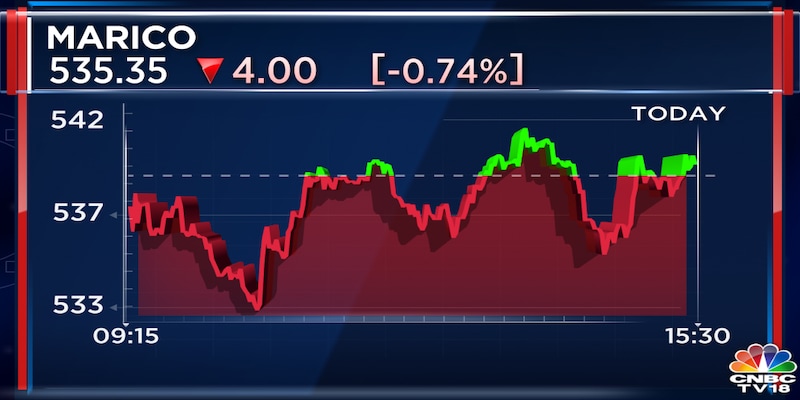 Marico, which owns iconic brands like Parachute and Saffola, said in India, as retail inflation held firm, the FMCG sector witnessed a volume decline for the fourth quarter in a row, with growth led by pricing. Shares of Marico ended at Rs 535.35, down by Rs 4, or 0.74 percent on the BSE.

In the corresponding quarter last year, the company posted a net profit of Rs 316 crore. CNBC-TV18 Polls had predicted a profit of Rs 319 crore for the quarter under review. The revenue from operations stood at Rs 2,496 crore during the period under review, up 3.2 percent against Rs 2,419 crore in the corresponding period of the preceding fiscal, with underlying volume growth of 3 percent in the domestic business and constant currency growth of 11 percent in the international business.
Also Read: Exclusive | Gogoro founder hopes to remove range anxiety with a mileage of 100 km per charge
At the operating level, EBITDA jumped 2.4 percent to Rs 433 crore in the second quarter of this fiscal over Rs 423 crore in the corresponding period in the previous fiscal. The EBITDA margin stood at 17.4 percent in the reporting quarter compared to 17.5 percent in the corresponding period in the previous fiscal. EBITDA is earnings before interest, tax, depreciation and amortisation.
After a tepid Q1, the company recovered to post reasonable growth in domestic volumes on the back of healthier traction among urban and premium discretionary portfolios. On a three-year CAGR basis, quarterly domestic volume growth stood at a healthy 7 percent.
Domestic revenues stood at Rs 1,896 crore, up 1 percent YoY, as price hikes in hair oils and premium personal care portfolios were more than offset by price cuts in Parachute coconut oil and Saffola oils.
Also Read: Kalpataru Power shares rise after company, subsidiary wins orders in excess of Rs 3,000 crore
The FMCG player that owns iconic brands like Parachute and Saffola, said in India, as retail inflation held firm, the FMCG sector witnessed a volume decline for the fourth quarter in a row, with growth led by pricing.
"Demand sentiment was largely on similar lines as the preceding quarter and improved slightly only in the last month of the quarter owing to the upcoming festive season."
Gross margin expanded 115 bps YoY, but was lower sequentially due to the consumption of higher-cost inventories of raw materials and the adverse cost impact of depreciating currencies in select international markets, it said.
Also Read: Vodafone Idea Q2 loss widens to Rs 7597 cr, loses 6m subscribers
The results came after the close of the market hours. Shares of Marico ended at Rs 535.35, down by Rs 4, or 0.74 percent on the BSE.
Check out our in-depth Market Coverage, Business News & get real-time Stock Market Updates on CNBC-TV18. Also, Watch our channels CNBC-TV18, CNBC Awaaz and CNBC Bajar Live on-the-go!