Mahindra & Mahindra recorded a 28 percent rise in revenue for the January to March 2022 period but a decline in tractor volumes hurt the firm’s margin, which came in at 11.4 percent, down from 14.7 percent in the same quarter of the previous fiscal.

Auto major Mahindra & Mahindra (M&M) beat Street estimates to record a 28 percent rise in revenue for the January to March 2022 period, according to the firm’s exchange filing on Saturday.

However, a decline in tractor volumes hurt the firm’s margin, which came in at 11.4 percent, down from 14.7 percent in the same quarter of the previous fiscal.
The automaker’s revenue at Rs 17,124, due to a recovery in demand for its automotive segment, was almost 2 percent higher than the prediction of Rs 16,795 as per a CNBC-TV18 poll of analysts. M&M’s standalone profit after tax (before exceptional items) for the quarter came in at Rs 1,167 crore, 8 percent higher than Street estimates of Rs 1,074 crore. PAT (after EI) was recorded at Rs 1,292 crore, which is a whopping 427 percent growth on year.
The automaker's earnings before interest, taxes, depreciation and amortisation (EBITDA) for the quarter under review was at Rs 1,945.54 crore, marginally down from Rs 1,955.18 crore for the same period last fiscal. EBITDA was in line with analysts expectations.
M&M’s total vehicle sales stood at 1,52,204, up from 106,333 in the fourth quarter of 2020-2021, while tractor sales dipped to 72,058 from 93,044 in the corresponding quarter of the last financial year.
Analysts polled by CNBC-TV18 had predicted a 44 percent on-year jump in automotive volumes to 1,000 units and tractor volumes to take a dent of 22 percent to 72,882 units. 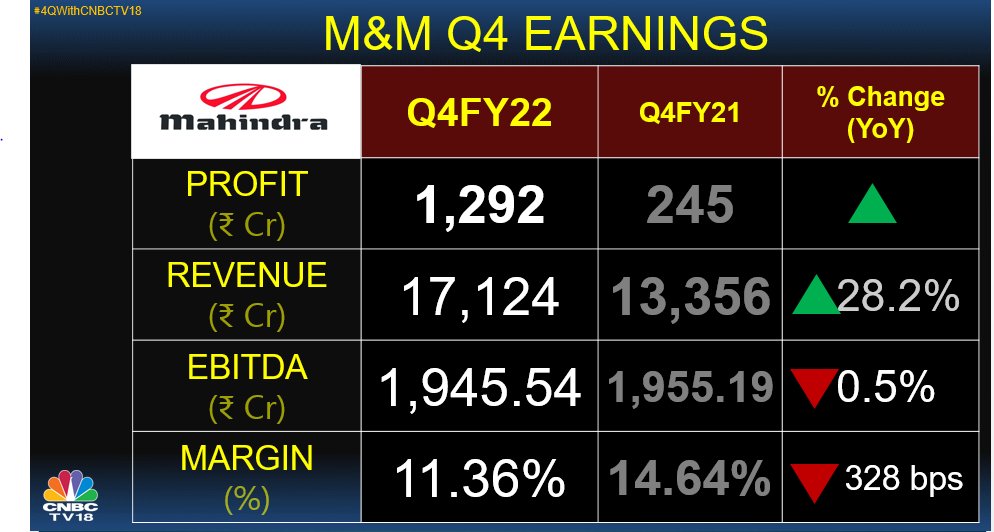 The automotive segment registered the highest-ever quarterly revenue at Rs 12,072 crore as a result of improved semiconductor supplies in the January to March 2022 period, the company said. Farm business, meanwhile, delivered highest ever volumes in FY22 (including Gromax and exports), it added.
M&M’s Executive Director Rajesh Jejurikar said, "We recorded our highest revenue for auto and farm segment in FY22. M&M became No.1 in SUV revenue market share in Q4 and H2 FY22, while FES gained 180 basis points market share in FY22. With 170k+ bookings, the demand for the automotive product portfolio remains strong.”
Given the recent fiscal and monetary measures by the government, the company foresees cost pressures in the economy to ease out, according to the company statement.
Check out our in-depth Market Coverage, Business News & get real-time Stock Market Updates on CNBC-TV18. Also, Watch our channels CNBC-TV18, CNBC Awaaz and CNBC Bajar Live on-the-go!