The CNBC-TV18 poll had predicted Hindustan Petroleum Corporation Limited's net profit as Rs 1,620 crore for the fourth quarter of the 2021-22 fiscal year 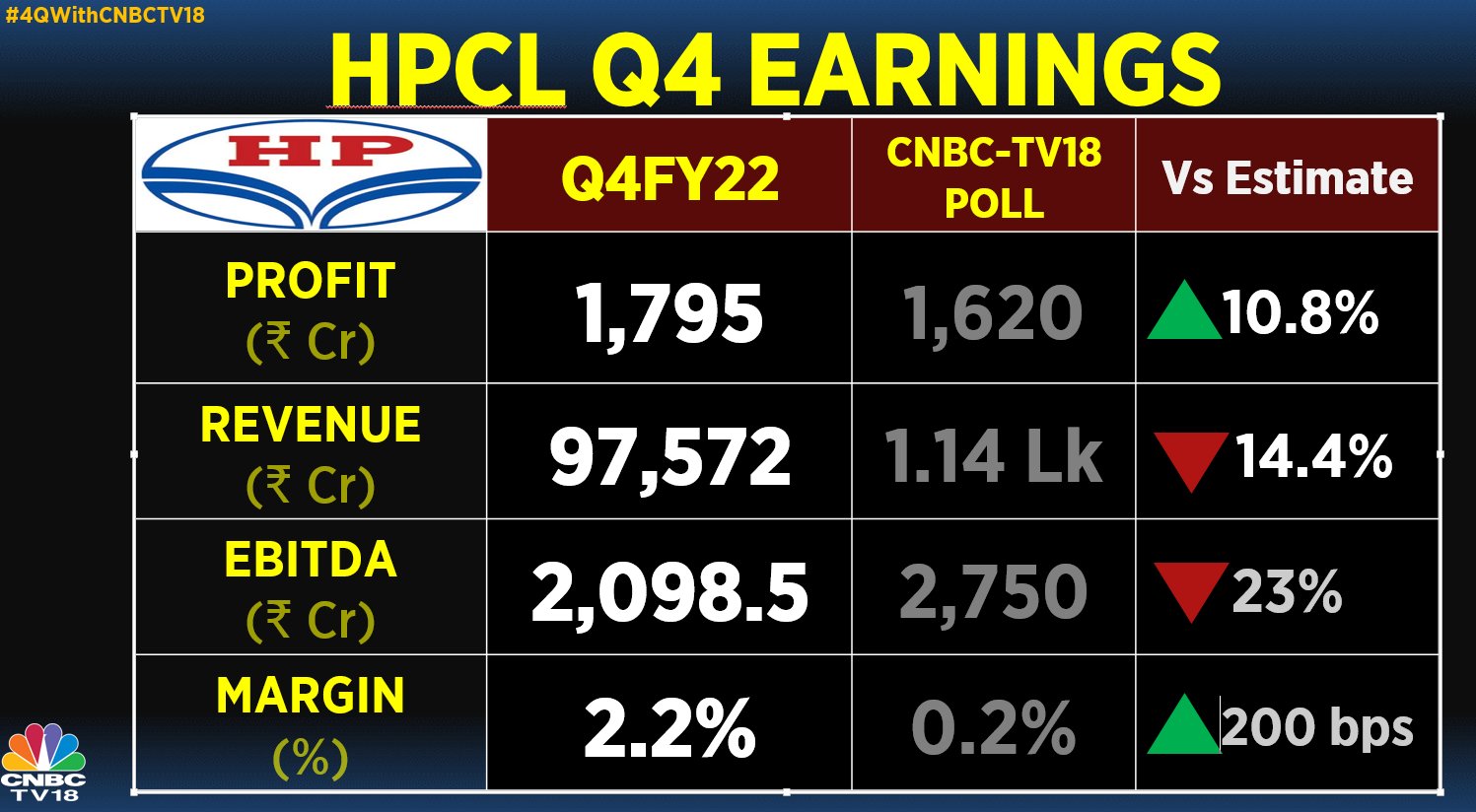 The margin was at 2.2 percent, compared to 1.9 percent in the previous quarter. The CNBC-TV18 poll had predicted the same to be 0.2 percent.
HPCL Chairman and Managing Director Pushp Kumar Joshi said the company earned USD 12.44 on turning every barrel of crude oil into fuel in the fourth quarter of the 2021-22 fiscal year, as against a gross refining margin (GRM) of USD 8.11 per barrel in the same quarter a year-ago. After removing inventory gains arising out of processing crude oil bought at lower rates, the core GRM came to USD 6.42 per barrel in the fourth quarter.
But these gains were wiped away by losses on petrol, diesel and domestic LPG sales. HPCL and other public sector oil companies held petrol and diesel prices for a record duration, despite a surge in the cost of raw materials (crude oil) to a 14-year high. They started raising prices only on March 22.
Even after the Rs 10 per litre increase in petrol and diesel prices between March 22 and April 6, they continued to make losses as international crude oil prices have stayed above USD 100 per barrel. It was similar for cooking gas LPG, where prices were hiked by Rs 50 per cylinder on March 22, but this was not enough to cover the gap between the cost of production and sale price.
Also Read:
Hit by impairment charges, Dr Reddy's PAT at Rs 87.5 crore in Q4
Another Rs 50 a cylinder increase occurred on May 7 and rates went up by Rs 3.50 on Thursday. Without getting into details, Director (Finance) Rajneesh Narang said there have been concerns on pricing, which have reflected on the lower profit in the fourth quarter.
"We are looking on passing on increased cost (to consumers)," he said, adding that the increase in price that will be passed on to consumers will depend on an "integrated view" after looking at the gains from refining margins and losses on marketing.
"At present, the prices are so volatile. Two days ago, the GRM on diesel was USD 48, yesterday it fell to USD 37. Spikes are so big, we need to see some stability... Also, we need to take a longer-term view as regarding pricing... Let's see how prices fare," he said.
"In the long term, we will see fuel prices are aligned with cost," he added.
Joshi said the company earned a net profit of Rs 6,382.63 crore on a revenue of Rs 3.72 lakh crore in the entire fiscal year (April 2021 to March 2022).
This was lower than the Rs 10,663.88 crore net profit on a revenue of Rs 2.69 lakh crore in the previous year. "2021-22 has been a remarkable year with world economies recovering," he said. "Demand revival coupled with improved economic activities resulted in crude prices gradually strengthening from USD 62-65 per barrel at the beginning of the year to USD 85 per barrel by October 2021," he said.
Also Read: Ashok Leyland Q4 profit zooms to Rs 901.4 crore on AVTR range
"Thereafter, rising geopolitical tensions and the Russia-Ukraine conflict resulted in crude price touching multi-year high of USD 138 per barrel in March 2022 before retreating to USD 110-115 per barrel towards the end of FY22," he added.
The company expects oil to stay above USD 100 for most of the year. It expects oil to trade in the USD 103-111 range in the second quarter of the current fiscal before dropping to USD 98-109 in the third quarter and USD 89-105 in the fourth quarter. He added that the domestic sales of HPCL for January-March 2022 stood at 10.26 million tonnes as compared to sales of 9.83 million tonnes in the previous year's corresponding quarter, showing a growth of more than 4 per cent.
During the financial year, HPCL achieved a domestic sales volume of 37.45 million tonnes as compared to 35.20 million tonnes in the same period of the previous year, representing a growth of more than 6 per cent. "During the year the company registered market share gain for total motor fuels sales among the industry with petrol and diesel sales growing by 10.6 per cent and 5.1 per cent respectively over FY21," he said.
With highest-ever LPG sales of 7.7 million tonnes during FY22, HPCL continued to be India's second-largest LPG marketer, posting a growth of 4.4 percent over FY21.
With inputs from PTI
Also Read: Here is why your cooking gas prices have gone up
Check out our in-depth Market Coverage, Business News & get real-time Stock Market Updates on CNBC-TV18. Also, Watch our channels CNBC-TV18, CNBC Awaaz and CNBC Bajar Live on-the-go!