Padalkar said that the earnings grew faster than the industry on retail annual prevalent equivalent (APE)  front. The APE came in at Rs 3,625 crore as against Rs 2,597 crore in the same period a year ago. The share of agency channel in Q3 increased to 18 percent from 14 percent. The annuity biz grew at 60 percent, while renewal premium grew at robust pace. The credit life business grew at 52 percent in the third quarter.
Citing the reason for the broad-based growth, Padalkar added that it can be seen on the back of a favourable distribution and product mix. 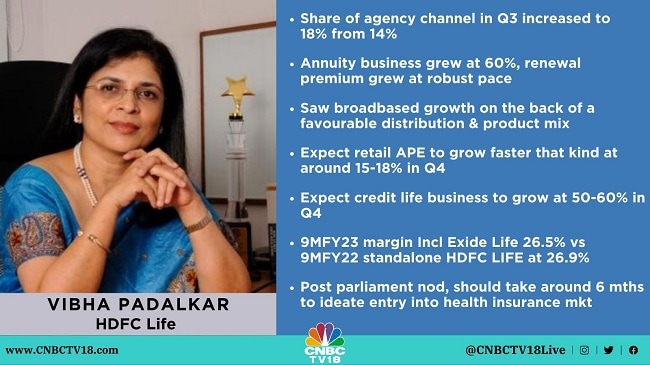 On the other hand, the consolidated margin looked lower as it posted it with Exide Life. However, HDFC Life has advanced margin neutrality date post merger of Exide Life.
"9MFY23 margin include Exide Life at 26.5 percent vs 9MFY22 standalone HDFC Life at 26.9 percent. The standalone HDFC Life margin is significantly higher. The Q3 margin came in at 26.8 percent vs 26.8 percent (YoY)," Padalkar told CNBC-TV18.
For the uninitiated, HDFC Life Insurance concluded the merger of Exide Life in October 2022, marking the completion of the first-ever merger and acquisition (M&A) transaction in the Indian life insurance sector.
On further expectations in fourth quarter, Padalkar said that she is expecting retail APE to grow faster that industry at around 15-18 percent.
She is expecting to end FY24 near margin neutral levels.
In another development, HDFC Life Insurance has applied to Insurance Regulatory Authority of India (IRDAI) for permission to enter the indemnity health insurance market.
On the same, Padalkar said that it should take around 6 months to ideate entry into health insurance market post Parliament nod.
Once this is approved, she added that the company will do things what a general insurer including HDFC Ergo is not being able to do in health insurance space.
"There is a lot that 2 companies from same group can do in the health insurance space," she added.
Post IRDAI's approval, the life insurance firm is likely to focus on critical illness products. Notably, the government has recently floated consultation paper on the issuance of composite insurance license. This would allow life insurers to enter general insurance market and vice versa. This proposal is likely to be taken up in Parliament this Budget session.
Check out our in-depth Market Coverage, Business News & get real-time Stock Market Updates on CNBC-TV18. Also, Watch our channels CNBC-TV18, CNBC Awaaz and CNBC Bajar Live on-the-go!
Tags