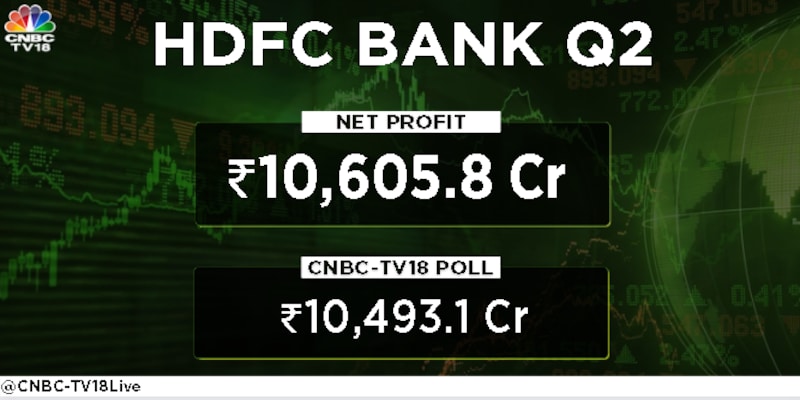 HDFC Bank, on Saturday, reported its financial results for the quarter ended September. The lender reported its net interest income at Rs 21,021.2 crore, up 18.9 percent year-on-year, best year-on-year growth in 13 quarters.  NII, or the difference between interest earned and interest paid, has grown 7.9 percent from previous quarter.

Analysts in a CNBC-TV18 poll had estimated the NII at Rs 20,712 crore.
Despite a rise in cost of funds, the net interest margin or NIM has improved. NIM — a key measure of profitability for financial institutions — has expanded to 4.1 percent, up from four percent in the preceding quarter. CLSA had estimated a NIM of 4.06 percent. The profit after tax or PAT for the period under review stood at Rs 10,605.8 crore, a 20.05 percent jump from the corresponding period in the previous year. PAT surged 15.3 percent on quarter-on-quarter basis. Analysts in a CNBC-TV18 poll has estimated a net profit of Rs 9,409 crore for the July-September period, which translates to a jump of 21.7 percent compared with the corresponding period a year go.
"Growth has been well supported across segments," said Srinivasan Vaidyanathan, HDFC Bank CFO, in the post earnings concall. He said that economic activity continued to hold up despite global outlook.
The gross non-performing assets of the bank in the quarter came at Rs 18,301 crore, up 1.5 percent from quarter one. The GNPA ratio is the lowest in seven quarters at 1.23 percent against 1.28 percent in the previous quarter. The NNPA stood at Rs 4,882.7 crore, down 0.1 percent from the April-June quarter. The NNPA ratio stood at 0.33 percent for the period under review.  The put call ratio rose to 73.3 percent from 72.9 percent in the last quarter.
HDFC Bank said its advanced increased 23.4 percent on a year-on-year basis to Rs 14.79 lakh crore. Its deposits rose 19 percent to Rs 16.7 lakh crore, with the CASA ratio — or the proportion of current account and savings account deposits in total deposits — at 45.4 percent as against 46.8 percent in the year-ago period.
The CFO said that 500 more branches of the bank will be opened in next few months. "Gold loan processing is offered in 2,950 branches, wealth management is now offered in 502 locations; will plan to increase market share via deepening the reach," He said that the bank acquired two million customers per quarter in the last few quarters.
The bank closed 2.4 million cards, as per RBI circular and added Rs 71,000 crore worth of retail deposits in the second quarter, Vaidyanathan said.
The loan loss provisions decline 5.9 percent from the previous quarter to Rs 3,000.4 crore. The annualised credit cost came at 0.81 percent, against 0.76 percent year-ago and 0.91 percent in the April-July quarter.
Loan growth was 23.4 percent year-on-year and 6.1 percent quarter-on-quarter. On rural business, Vaidyanathan stated that the commercial rural book growth was 9.4 percent on quarter-on-quarter basis. Rural business reach was at 1.42 lakh villages, in line, on target of 2 lakh villages, he said on the concall.
The company's slippages stood at Rs 5,700 crore, down from Rs 7,297 crore from the previous quarter. Recovery and upgrades were down from previous quarter at Rs 2,500 crore and Write offs were down at Rs 3,000 crore.
However, the company's core operating profit or the operating profit ex-treasury stood at  Rs 17,139.1 crore, up 13.3 percent from year-ago period and 2.8 percent from previous quarter.
(Edited by : Asmita Pant)
Check out our in-depth Market Coverage, Business News & get real-time Stock Market Updates on CNBC-TV18. Also, Watch our channels CNBC-TV18, CNBC Awaaz and CNBC Bajar Live on-the-go!