FMCG Q3FY19: A look back at key themes played out in the quarter

Updated : February 15, 2019 12:18 PM IST
A large part of revenue growth in the third quarter of the fiscal year 2018-19 can be attributed to Diwali that was celebrated on November 7 as against October 19 in 2017
In terms of volume growth, the stand out performers this quarter were Hindustan Unilever and Asian Paints

As we draw a close to December-quarter earnings season, it’s a good time to reflect upon the key themes that played out in the third quarter of the fiscal year 2018-19. While there were some resounding successes and a few nasty surprises, there was no reason to believe the great Indian consumption story is under threat.

A large part of revenue growth in the December 2018 quarter can be attributed to Diwali that was celebrated on November 7 as against October 19 in 2017. The pre-festive and festive season sale that took place in Q2 of FY18 shifted to Q3 of FY19. That led to an additional boost to revenues.

Another theme that stood out was margins for companies with crude/currency linked inputs. Crude has now cooled off from levels of $86 in October and the rupee strengthened from historic lows of 74, but Q3 saw margins decline as a lot of the companies may have carried some high-cost inventory and a lag with which the prices of Crude Derivatives decline.

In terms of volume growth, the stand out performers this quarter were Hindustan Unilever and Asian Paints. HUL more so, as this marks the FMCG giant’s fifth straight quarter of double-digit volume growth. While ITC-cigarettes and Dabur reported better than expected volume-growth margin decline for ITC was not taken too well by the street.

On the flip side, Britannia posted subdued volume growth of 7% and attributed it to post Diwali sluggishness while Marico, Emami and Godrej Consumer Products were below expectations.

Three results that stood out in the third quarter were Titan, Jubilant FoodWorks and Bata. The common thread that binds these companies are they have similar customer profiles. They cater to the pizza eating, jewellery buying upwardly mobile citizen of our country. Bata too, once perceived as a common man’s shoe has now upped its premiumization game. 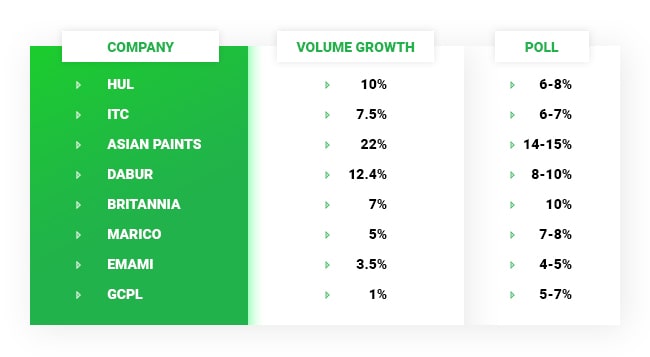 Most companies this quarter chose to chase volumes and revenue, even at the cost of profitability. This will be an important trend to monitor going forward. If the revenue and market shares stay sticky when pricing returns, this strategy will be considered successful. 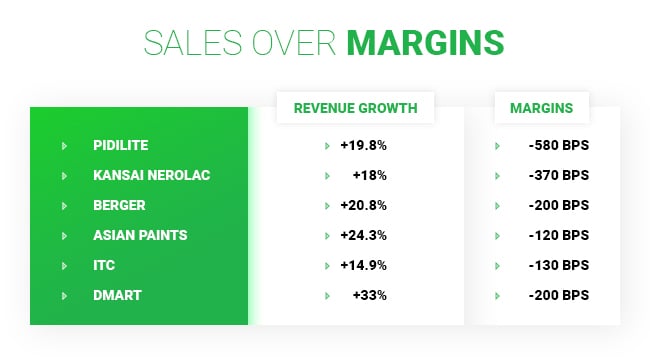 TRIGGERS FOR Q4FY19 and BEYOND:

The road ahead looks promising. Demand momentum post festive season has sustained and further fueled by the government's thrust on rural growth. Higher MSP for crops, budget announcements and the income tax rebate would mean more money in the hands of people with a higher propensity to consume. Crude and currency benefits should accrue in Q4 & beyond. Modern trade, the key channel for companies to sell innovative & premium products continues to outpace traditional channels.

THE BIG QUESTION: WHAT’S IN IT?

Nearly all consumer companies are trading at/close to record valuations. While there are structural tailwinds to explain this, one must not rule out the role of other sectors in FMCG valuations being so high. There’s a TINA (There is no alternative) factor playing out in the consumption space as all other sectors are grappling with their own issues. The party, while expensive, will last until it’s the only party in town.