Pharma major Dr Reddy's Laboratories (DRL) reported a net profit of Rs 762.3 crore in the second quarter of fiscal 2021, which was better than CNBC-TV18 analysts' poll estimates of Rs 646 crore. The net profit was down 30 percent as against Rs 1,092.5 crore in the year-ago period. 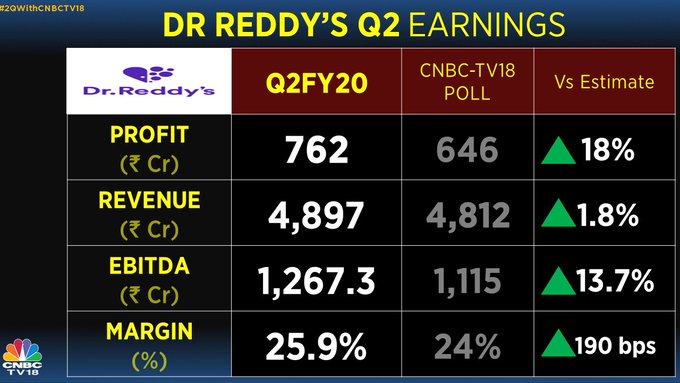 "We are pleased to report continued growth across all the markets and improved productivity which is reflected in the healthy EBITDA margin and RoCE. Our research teams are working on several potential remedies for COVID in addition to the already launched products," said G V Prasad, Co-chairman & MD, Dr Reddy's Laboratories.

DRL's revenues from Global Generics (GG) segment were at Rs 39.8 billion, registering a year-on-year growth of 21 percent and sequential quarter growth of 14 percent.

This was driven primarily on account of new product launches, volume traction in the base business and integration of the acquired business from Wockhardt in India, the company said in a regulatory filing.

Revenues from North America rose 28 percent YoY to at Rs 18.3 billion, driven by contribution from new products launched, increase in volumes of our base products and aided by a favorable forex rate, which was partially offset by price erosion.

Sequential growth of 6 percent, on account of volume traction in the base business and new product launches, offset by adverse forex movement and price erosion, it said.

Revenues from Europe were at Rs 3.8 billion, recording a year-on-year growth of 36 percent and sequential growth of 6 percent.

India revenues reported a growth of 21 percent YoY and sequential growth of 46 percent at Rs 9.1 billion, primarily on account of revenues from the acquired business of Wockhardt and contribution from new products including the Avigan (Favipiravir) and Remdesivir launched for the treatment of Covid-19.

On October 22, 2020, DRL had experienced an information security incident and consequently isolated the impacted IT services. This incident involved a ransom-ware attack.

"We promptly engaged leading outside cybersecurity experts, launched a comprehensive containment and remediation effort and investigation to address the incident. As of date, our investigation has not ascertained if any data breaches in the incident pertain to personally identifiable information stored in the Company's systems," it said.

"Recovery and restoration of all applications and data is underway. All critical operations are being enabled in a controlled manner," it added.

In a separate release, the company informed that it has appointed Parag Agarwal as Chief Financial Officer w.e.f. November 2, 2020.