A poll by CNBC-TV18, expected the net profit at Rs 265 crore. Colgate reported a profit of Rs 252.3 crore in the corresponding quarter in the previous year.

Colgate reported a profit of Rs 243.2 crore for the quarter ender review, 8.2 percent below estimates. A poll by CNBC-TV18, expected the net profit at Rs 265 crore. Colgate reported a profit of Rs 252.3 crore in the corresponding quarter in the previous year.
CNBC-TV18 poll expected the company to report a low-single-digit rise in revenue while EBITDA or operating profit was also seen registering a low single digit growth compared to last year. 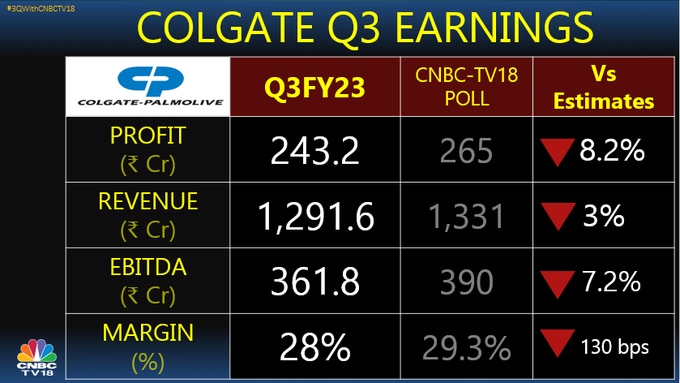 The company's revenue from operation came Rs 130.1 crore against, Rs 139.8 crore in the previous quarter and Rs 128.5 crore in the year-ago period. The company's ad spends during the quarter under review came at Rs 169.9 crore against Rs 158.2 crore in the previous quarter. In the quarter ended December 2021, the ad spends came at Rs 150.9 crore.
The company stated in an exchange filing that the sales, net of GST, for the quarter ended and nine months ended December 31, 2022 increased by 0.8 percent and 1.9 percent respectively as compared to the year-ago period.
During the quarter, the company undertook a price hike of four percent. Prabha Narasimhan took over as managing director and chief executive officer of the oral care company on September 1. Narasimhan told CNBC-TV18 that the key goal for the company is to drive performance and keep up with the environmental changes. She said Colgate-Palmolive (India) is the highest-penetrated brand in the country.
Shares of Colgate-Palmolive India are trading 1.5 percent lower at Rs 1,468.85. The stock is 12 percent off its recent highs and is trading at 34 times financial year 2024 earnings.
Catch the latest market update with CNBC-TV18.com's blog
Check out our in-depth Market Coverage, Business News & get real-time Stock Market Updates on CNBC-TV18. Also, Watch our channels CNBC-TV18, CNBC Awaaz and CNBC Bajar Live on-the-go!