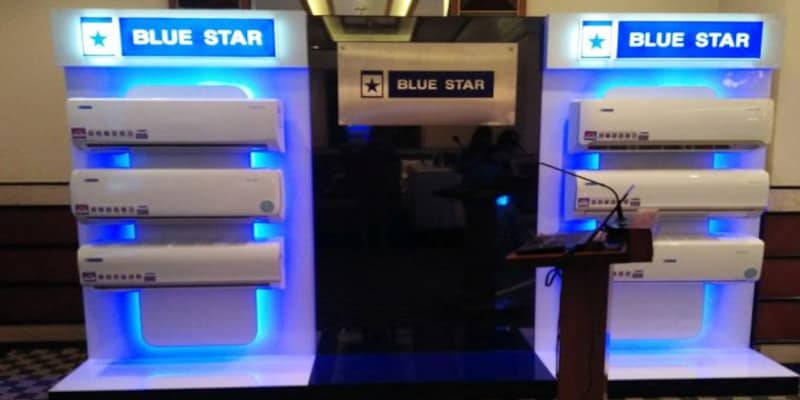 Blue Star had recorded a consolidated net profit of Rs 68.09 crore in the fourth quarter of the 2020-21 fiscal year

The company had posted a consolidated net profit of Rs 68.09 crore in the January-March period a year ago, Blue Star said in a regulatory filing.
Its revenue from operations jumped 39.46 percent to Rs 2,247.58 crore during the period under review, as against Rs 1,611.56 crore in the corresponding quarter last fiscal. Blue Star's total expenses were at Rs 2,140.61 crore, up 38.72 percent from Rs 1,543.01 crore earlier.
Also Read:
Dabur Q4 net profit at Rs 294.3 crore; becomes Rs 10k cr-company
"Good demand for the company's offerings across all business segments coupled with an early onset of summer in some parts of the country, helped Blue Star register a robust revenue growth," it said in a statement.
The momentum gained in Q3 FY22 continued in Q4 despite a three-week disruption caused by the Omicron variant.
"Against this backdrop, the company delivered record revenue and profits in Q4FY22 and ended the year on a high note despite losing the 2021 summer season," it added.
Revenue from 'Electro-Mechanical Projects and Commercial Air Conditioning Systems' segment was at Rs 1,135.97 crore as against Rs 779.96 crore in the year-ago quarter.
Revenue from Unitary Products, which mainly comprises residential ACs, was at Rs 1,034.01 crore as against Rs 781.81 crore earlier. "Strong pent-up demand coupled with the onset of early summers, and an improvement in the consumer sentiments across the country enabled good growth in revenue for the Room Air Conditioners business," the company said.
Also Read: Ceat Q4 net profit plunges 84% to Rs 25 cr, revenue up slightly
The commercial refrigeration business witnessed increased traction across all product categories owing to the revival of demand from traditional customer segments such as ice cream, processed foods, dairy, and restaurants, it added. Revenue from its 'Professional Electronics and Industrial Systems' was at Rs 77.60 crore as against Rs 49.79 crore.
For the fiscal ended March 2022, Blue Star's consolidated net profit climbed 66.89 percent to Rs 168 crore. It had reported a net profit of Rs 100.66 crore for 2020-21. Revenue from operation was at Rs 6,045.58 crore in 2021-22. This was 41.79 percent higher than Rs 4,263.59 crore in the preceding fiscal.
The board of the company on Thursday recommended a dividend of Rs 10 per equity share of Rs 2 each for FY22. On the outlook, Blue Star Vice Chairman and Managing Director Vir S Advani said, "We are confident of building on the momentum gained in Q3FY22 and Q4FY22 into Q1FY23 and the subsequent quarters."
Also Read: Cigniti Tech net profit down 8.3% in fourth-quarter as management looks to stabilise margins
Check out our in-depth Market Coverage, Business News & get real-time Stock Market Updates on CNBC-TV18. Also, Watch our channels CNBC-TV18, CNBC Awaaz and CNBC Bajar Live on-the-go!