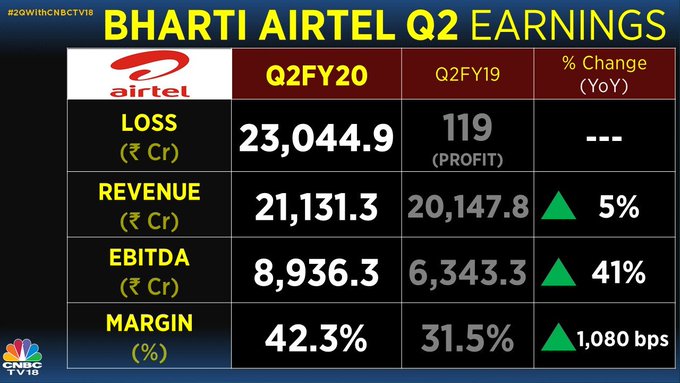 Airtel Q2 result
The consolidated revenue of Bharti Airtel was up by 4.7 per cent at Rs 21,199 crore in the just-concluded quarter.
Adjusted Gross Revenue Dues
Bharti Airtel has provided for an additional amount aggregating Rs 28,450 crore as a charge for the quarter (comprising of Principal of Rs 6,164 crore, interest of Rs 12,219 crore, penalty of Rs 3,760 crore, and interest on penalty of Rs 6,307 crore) with respect to the license fee as estimated based on the Supreme court judgement and spectrum usage charges (SUC) as estimated based on the definition of AGR, the company said in a regulatory filing.
The Supreme Court, last month, upheld the government's position on including revenue from non-telecommunication businesses in calculating the annual AGR of telecom companies, a share of which is paid as licence and spectrum fee to the exchequer. Old telecom operators Bharti Airtel and Vodafone Idea will take the maximum hit on the payment of statutory dues to the government.
The consolidated revenues for Q2 at Rs 21,131 crore grew 6.9 percent Y-o-Y (reported an increase of 4.9 percent) on an underlying basis. Consolidated mobile data traffic at 4,661 petabytes in the quarter has registered a healthy Y-o-Y growth of 81 percent.
India revenues for Q2 at Rs 15,361 crore have increased by 5.7 percent Y-o-Y (reported an increase of 3.0 percent) on an underlying basis. Mobile revenues have witnessed a Y-o-Y growth of 7.1 percent. Mobile data traffic has nearly doubled to 4,497 PBs in the quarter as compared to 2,478 PBs in the corresponding quarter last year. Mobile 4G data customers increased by 56.9 percent to 103.1 million from 65.7 million in the corresponding quarter last year, the company said.
Digital TV Business
Digital TV revenue witnessed a growth of 17.1 percent Y-o-Y on an underlying basis (a decline of 22.9 percent on a reported basis due to reporting changes in DTH pursuant to the new tariff order. Airtel Business has sustained its performance on a Y-o-Y basis.
Consolidated EBITDA at Rs 8,936 crore increased 40.9 percent Y-o-Y. The consolidated EBITDA margin increased by 10.8 percent to 42.3 percent in the quarter as compared to 31.5 percent in the corresponding quarter last year. Consolidated EBIT increased by 85.2 percent Y-o-Y to Rs 1,993 crore.
The consolidated net loss before exceptional items for the quarter stood at Rs 1,123 crore. The consolidated net loss after exceptional items for the quarter stands at Rs 23,045 crore.
Gopal Vittal, managing director and chief executive officer, India & South Asia, said, "Despite being a seasonally weak quarter, we witnessed positive revenue growth in Q2 on the back of various initiatives aimed at providing superior differential services through our Thanks platform. We continue to witness strong data traffic growth of 81 percent Y-o-Y and added 8 million 4G customers on our network during the quarter."
Shares of Bharti Airtel ended at Rs 362.65, down Rs 5.85, or 1.59 percent on the BSE.
Check out our in-depth Market Coverage, Business News & get real-time Stock Market Updates on CNBC-TV18. Also, Watch our channels CNBC-TV18, CNBC Awaaz and CNBC Bajar Live on-the-go!
Tags