Telecom firm Bharti Airtel on Monday reported its quarterly earnings for the July to September period during which its net profit rose to Rs 2,145.9 crore, missing the CNBC-TV18 poll estimate of Rs 2,396 crore.

Telecom firm Bharti Airtel on Monday reported its quarterly earnings for the July to September period during which its net profit rose to Rs 2,145.9 crore, missing the CNBC-TV18 poll estimate of Rs 2,396 crore. 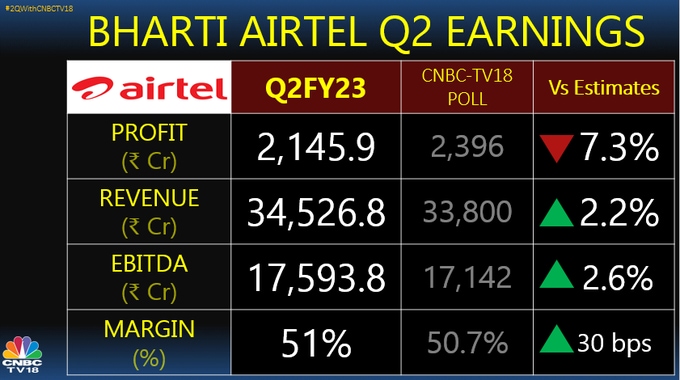 Bharti Airtel's quarterly revenue went up 21.9 percent year-on-year to Rs of Rs 34,527 crore, slightly above projections of analysts polled by CNBC-TV18. This is backed by strong and consistent performance delivery across the portfolio and crossing 500 million customers globally, the firm said.
"India revenues for Q2’23 at Rs 24,333 crore, increased by 22.3 percent YoY. Mobile revenues grew by 24.8 percent YoY on account of improved realisation as well as strong 4G customer additions during the year," it said. Airtel's average revenue per user (ARPU) for the second quarter of the fiscal rose to Rs 190 as against Rs 183 in the April to June 2022 period, the telco said in an exchange filing. This compares to Rs 153 in the September quarter of the last fiscal.
According to the firm, the rise comes on the back of continued focus on quality customers, feature phone to smartphone upgradation and data monetisation.
The company also revealed that it paid Rs 8,312 crore for 5G spectrum to the Department of Telecommunications (DoT) for four years, which was settled ahead of schedule to free up cash flow for 5G rollout.
Airtel CEO Gopal Vittal said the company is now rolling out 5G and exuded confidence that Airtel 5G Plus will deliver the best experience in India.
"At the same time we remain concerned about the low ROCE (Return on Capital Employed) that our business delivers due to pricing that is the lowest in the world. Given the large investments required to drive digital adoption in India, we believe there is a need for tariff correction," Vittal said.
Compared to peers, Airtel's India mobile revenue growth was stronger than Jio's (4 percent QoQ for Bharti vs 3 percent for Jio) led by higher increase in ARPU (3.8% growth for Bharti vs 0.9 percent for Jio). However, Jio subscriber addition was stronger at 7.7 million vs 0.49 million for Bharti.
Check out our in-depth Market Coverage, Business News & get real-time Stock Market Updates on CNBC-TV18. Also, Watch our channels CNBC-TV18, CNBC Awaaz and CNBC Bajar Live on-the-go!