Updated : February 17, 2020 05:59 PM IST
For the past two quarters, there is worry about loan growth for the banking sector.
The appetite of banks for lending aggressively has reduced massively in Q3FY20.
YES Bank postponed its Q3 results due to its fund raising programme.

A theme in the reported third-quarter earnings of financials is that provisions for most continued to be high. Banks had elevated provisions owing to their exposures in DHFL, ADAG group, etc. Some of them have also made provisions for exposure to Vodafone, for which, additional provisions are expected to continue given the Supreme Court ruling on adjusted gross revenue (AGR) dues which need to be paid by the telecom service company by March 17, 2020. Thus, a scene change in the final quarter of this fiscal is unlikely.

For the past two quarters, there is worry about loan growth for the banking sector. In this quarter (Q3), loan growth has slowed down substantially. For the first fortnight of January ’20, loan growth continued to remain sub 8 percent. A couple of banks like Kotak and Axis have sounded cautious about loan growth ahead in the current environment.

Banks typically have three large segments to lend to, i.e. corporate, SME and retail. Of these three, the former two are under stress. As a result, retail loans (typically forming around 30-35 percent of bank’s books) are getting over-crowded.

Some of the large banks have been able to pick up market share owing to NBFC portfolio buyout. Therefore, loan growth is expected to remain on the lower side for banks over the next couple of quarters owing to the macroeconomic environment and banks being cautious to go for aggressive lending.

A silver lining was that PSU banks reported loan growth, compared quarterly as well as yearly, after a really long time. Also, large banks like HDFC Bank, ICICI Bank, and Axis Bank are still surprising positively on the loan growth front versus their peers.

Q3FY20 was perhaps the best quarter for large corporate banks in a long while as they saw huge recovery from exposures to stressed accounts like Essar Steel, Ruchi Soya, Prayagraj, etc which saw successful resolutions in Q3FY20.

Going ahead, expect a couple of accounts to be resolved in Q4FY20, but recovery will not be at elevated levels like one saw in this quarter. Assam based banks like Bandhan Bank, Ujjivan SFB, etc saw the impact on asset quality owing to political issues in the state.

PSU banks continued to report net losses due to provisions on the aging NPAs, telecom sector exposure, taxes and elevated slippages for a few.

IDBI Bank may not report such high net loss in Q4FY20 as this quarter hit was due to tax provisions. The onus of bad results falls on mid and small private banks for the second consecutive quarter. Their credit cost guidance continues to remain on the higher side for FY20 & in the first half of FY21 as well.

The good part for corporate lenders was the huge recovery they saw due to resolutions in large cases. However, cases being admitted into NCLT continued even in Q3FY20, indicating that the worst might not be over. In the new cases, the quantum is on the lower side though, i.e. the average ticket size from each bank is on the lower side.

The agriculture sector contributed weigh on banks in Q3 as various states which announced farm loan waiver, failed to repay money to banks.

The mid/small private banks were the worst performers in the December quarter.

The pain came from exposures to stressed names in the NBFC/HFC sector like the Zee group, etc. The telecom sector, especially exposure to Vodafone, is now a worrying area for banks. There is also pressure from unsecured lending in the retail sector like credit card and personal loans; which by many bankers have been highlighted as an area of concern. Continued addition to NCLT cases is burdening banks w.r.t. provisions and it will continue in the coming quarters as well.

The appetite of banks for lending aggressively has reduced massively in Q3FY20. We saw the likes of Kotak Mahindra Bank slowing down its loan growth to lower double digits while Axis Bank has sounded cautious due to slowdown in the economy.

PSU Banks are well-capitalised. Q4FY20 will be the last quarter before the merger for many banks like Syndicate Bank, Allahabad Bank, Andhra Bank, Corporation Bank, etc. There is a stark difference in the performance of the big boys versus the smaller players in the private sector but caution by Axis an Kotak will be noted by the street.

With better recoveries in Q3, PSU banks' asset quality has fared well and the majority of them have guided for lower corporate slippages in Q4. However, cases like DHFL, Vodafone Idea, etc., are surprising corporate lenders on negatively every quarter. On the other hand, the government is ensuring the lowering of G-sec yields which can provide a boost for treasury gains amongst banks.

Though the market share of PSU banks continued to deteriorate, the outlook on their profitability is now in a much better state. Some of them are still in pain like IDBI Bank, PNB, Allahabad Bank, etc, but the majority seem to be out of the woods. 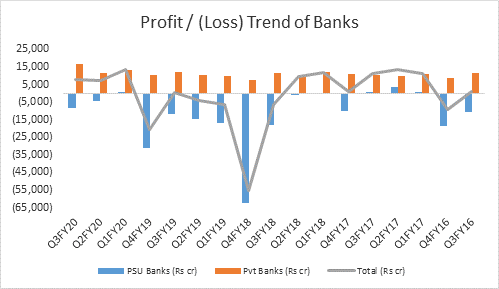 Slippages are loans that turn into NPAs as payments are due for more than 90 days. The negative impact that slippages have for a bank is that they lead to lower interest income while higher provisioning and thus dent the earning capacity of a bank. It has a vice-versa impact i.e. declining trend of slippages coupled with loan growth means better earning capacity of the bank.

Banks have mentioned that the worst of large corporate slippage woes are over. Going ahead, they do expect some unsecured retail portfolio and few other segments to contribute to slippages; but it’s expected to remain under control. Overall GNPA of the banking sector was at Rs 8.98 lakh crore, down 6.7 percent YOY & 1.2 percent QOQ. GNPA ratio of the banking sector was at 9.6 percent vs 11.04 percent YOY & vs 9.92 percent QOQ. PSU banks continued to strengthen their balance sheet with provision coverage ratio (PCR) which aided the overall PCR of banking industry to 63.5 percent vs 56.7 percent YOY & 63.4 percent QOQ. This PCR is without technical write off. A higher coverage ratio spells a stronger balance sheet to sustain sudden jolts on NPAs or stressed assets. Gross NPA of PSU banks declined 1.7 percent QOQ in absolute value while their Gross NPA ratio declined by 38bps QOQ. In absolute value, gross NPA of private banks increased by 1.9 percent QOQ, and due to healthy loan growth around 3.8 percent QOQ; their GNPA ratio declined by 7bps QOQ.

PSU banks back to reporting net loss but it's okay

PSU banks have reported a net loss of Rs 8,474 crore thanks to some heavy provisioning done by the IOB and one-time heavy tax paid by IDBI Bank. Slippage woes, however, continue for the banking sector as a whole and PSU banks, despite their valiant clean-ups are still getting haunted by elevated slippages for some of them.

Watchlist continues to remain elevated due to telecom sector exposure in Q3FY20. With the government’s capital infusion, the majority of the banks are now well strengthened in terms of capitalization. Higher provision coverage ratio also meant that PSU banks reported Net NPA below 5 percent for the fourth time in 16 quarters and it is expected to remain below 5 percent henceforth. PSU banks continue to lose their market share to private banks. PSU banks have lost a market share of 1236 bps or 12.36 percent in the last 17 quarters.

NIM improved for the majority of the PSU banks due to better income (recovery) and continuous lowering of deposit rates. Residual stress in the balance sheet is in single digits (as a percent of the loan book).

Private banks, especially the mid and small ones, continue to see pressure as many of them like RBL Bank, IDFC First Bank, etc. reported net losses due to elevated stress in the balance sheet. While the stress has not come down, but on account of high exposure to unsecured retail lending, it remains elevated.

Along with that is exposure to some stressed segments/accounts which will continue to keep provisions elevated for many of them. Big boys like HDFC Bank, ICICI Bank, and Axis Bank continued to gain market share in Q3; while Kotak Mahindra Bank slowed down on loan growth owing to macroeconomic conditions. Banks like YES Bank & Lakshmi Vilas Bank are in urgent need of capital; while RBL Bank’s fundraising in Q3FY20 saw them comfortably placed in terms of capitalization.

The net profit for private banks was at Rs 16460 crore, up 50.2 percent YOY & 44.4 percent QOQ. The good part is that they continue to gain market share for the 17th quarter in a row on the back of strong capitalization. Healthy loan growth has also enabled them to make higher provisions despite the increase in provisions in Q3. GNPA of private banks was at Rs 1.32 lakh crore, up 1.9 percent QOQ. Some of the positive surprises in private bank results came from the likes of ICICI Bank & Axis Bank. The negative surprise came in from RBL Bank & IDFC First Bank.

Slippage analysis of some of the large corporate banks