In the corresponding quarter last year, the company posted a net profit of Rs 1,332 crore. CNBC-TV18 Polls had predicted a profit of Rs 1,024 crore for the quarter under review. 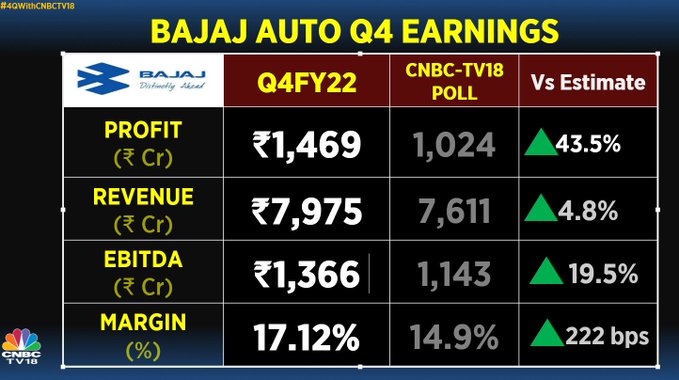 Also Read:
HUL Q4 results: Net profit rises 8.6% YoY to Rs 2,327 crore, turnover crosses Rs 50,000 crore; beats estimates
The Pune-based company continues to face severe supply chain challenges, especially in Q4 FY22, impacting sales of motorcycles and commercial vehicles. On a full-year basis, the share for motorcycles sold in the domestic market marginally improved to 18.2 percent.
The domestic commercial three-wheelers business recorded a growth of 47 percent against an industry growth of 21 percent. As a result, the share in the domestic market stands at 62 percent (improved by 10.9 percent over FY21).
The international business recorded its highest ever sales of over 2.5 million vehicles for FY22. With sales of over $2 billion, exports now contribute over 52 percent of our net sales.
Also Read: Bajaj Finance Q4 results: Co reports highest ever net profit at Rs 2,420 crore
Sequentially, the EBITDA margin improved from 15.6 percent in Q3/FY22 to 17.5 percent in Q4/FY22, largely for the positive impact of price increase, deferral of material cost increase, and improved US dollar realisation and favourable sales mix.
Also, the accrual of incentive receivable from the state government of Maharashtra under the Package Scheme of Incentive 2007 amounted to Rs 31 crore for the period April 2021 to March 2022.
Exceptional items include Rs 315 crore accrued as incentive receivable from the state government of Maharashtra under Package Scheme of Incentive 2007 for the period April 2015 to March 2021.
Also Read: HDFC Life posts Q4 net profit of Rs 357 crore
The Board of Directors has approved a dividend at the rate of Rs 140 per share (1400 percent) of the face value of Rs 10 each on equity shares for the financial year ended March 31, 2022.
The results came after the close of the market hours. Shares of Bajaj Auto ended at Rs 3,909.00, up by Rs 18.60, or 0.48 percent on the BSE.
Check out our in-depth Market Coverage, Business News & get real-time Stock Market Updates on CNBC-TV18. Also, Watch our channels CNBC-TV18, CNBC Awaaz and CNBC Bajar Live on-the-go!