Updated : October 20, 2020 05:17 PM IST
While volumes for Tractors are growing on a YoY basis, two-wheelers and PV volumes are at 90– 110 percent of last year’s levels.
On the operational front, after eight straight quarters of YoY decline in EBITDA margins, Q2FY21 could potentially mark the beginning of the margin recovery phase, brokerage Motilal Oswal said.

The automobile sector witnessed a stronger than expected volume recovery in the second quarter of fiscal 2021 driven by better demand, improvement in the supply chain and inventory buildup ahead of the festive season.

The incremental easing of the lockdowns since the start of the quarter led to the release of the pent-up demand across customer-led segments of passenger vehicles (PV) and two-wheelers.

During the quarter, OEMs launched newer variants and models and replenished inventory levels to capture any demand spurt during the festive season, even as tighter credit clearance norms may continue to hinder demand.

On the operational front, after eight straight quarters of YoY decline in EBITDA margins, Q2FY21 could potentially mark the beginning of the margin recovery phase, brokerage Motilal Oswal said.

“EBITDA margins for our OEM (ex-JLR) universe are likely to expand 60 bp YoY to 10.9% (v/s 4% in 1Q), led by good margin recovery in mainstream 2W, Tractors, and Maruti Suzuki. On the other hand, we expect margins to decline for CV players, Eicher Motors, and TVS Motor Company,” the brokerage said.

Overall, the automobile companies are expected to see around 10 percent YoY increase in realisations on account of BS-VI price hikes, impacted by INR appreciation while the operating performance to be largely flat. Gross margins can increase 46 bps YoY and employee costs may remain marginally lower (down 17 bps YoY). EBITDA is likely improve around 4.4 percent YoY maintaining an EBITDA margin of 17.5 percent (up 95 bps), as per ICICI Securities. 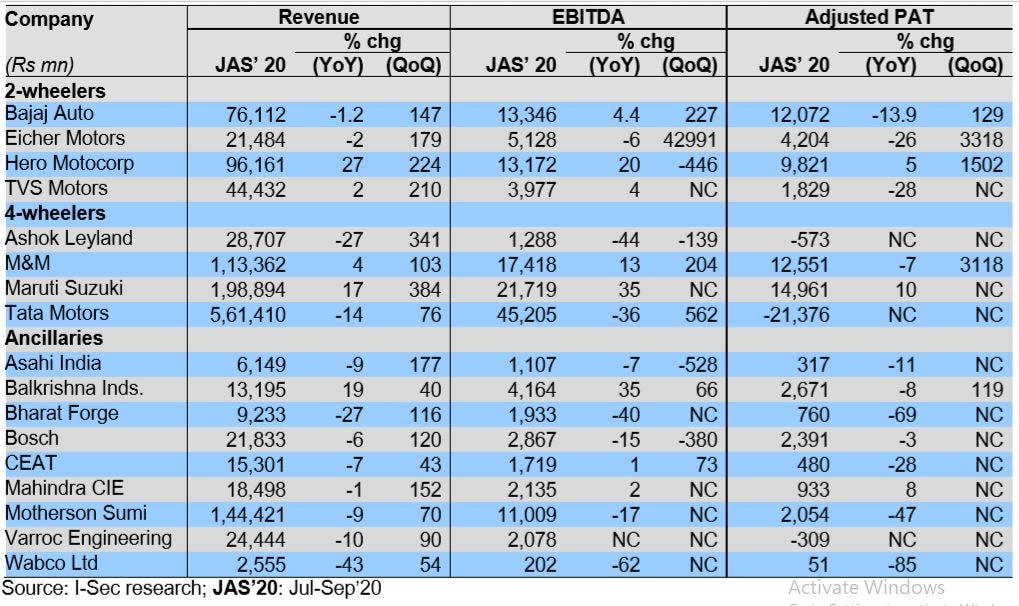 Among two-wheelers, Hero MotoCorp is expected to see revenue growth of around 27 percent YoY largely due to volume growth of 7 percent YoY and net realisation improvement of 18 percent due to pass-through of the BS-VI price increase, according to the brokerage.

Gross margins are likely to fall by 313 bps to 29 percent due to higher raw material costs. EBITDA margin is expected to decline by 85 bps YoY.

Realisations are expected to rise 10 percent on account of BS-VI price hikes, impacted by INR appreciation. Operating performance is likely to be largely flat. Gross margins can increase 46 bps YoY and employee costs may remain marginally lower. EBITDA may improve by 4.4 percent YoY maintaining an EBITDA margin of 17.5 percent, up 95 bps. The brokerage expects PAT to drop by 14 percent YoY.

TVS Motor Company’s volumes declined marginally by 2 percent YoY while realisations are expected to be up 4 percent on better product mix and increased BS-VI model prices.

Analysts expect revenue improvement of 2.2 percent even as gross margins may decline 123 bps to 25.4%. EBITDA margin is expected to be flat at 8.9 percent, up 16 bps, while TVS is likely to report PAT of Rs 180 crore, ICICI Securities said.

In Q2FY21, volumes of Royal Enfield declined 9.6 percent impacted by discretionary demand weakness across markets. Realisations are expected to improve 9 percent due to the rising contribution of 650cc twins, BS-VI price increases. Revenue is expected to be down slightly by 1.5 percent as gross margins came in at 45 percnet, down 77 bps.

Among four wheelers, Maruti Suzuki may report strong growth in revenues at 17 percent YoY due to domestic PV volumes growth of 19 percent and exports decline of 13 percent. Realisations may hold steady amid stable product mix of UV share.

For Tata Motors, JLR wholesale volumes declined 40 percent YoY. Topline is expected to decline by 14 percent with EBITDA margin down 271 bps to 8.1 percent.

“We expect JLR to post revenues of ~GBP 4.3 billion (down 29% YoY) with adjusted EBITDA margin of 9% (down 475 bps YoY). On operational basis, we expect JLR to report a loss of GBP 130 million. Standalone business is expected to witness a topline decline of 4.4% YoY as PV business is witnessing strong growth and is likely to post EBITDA margin improvement of 197bps YoY to -0.4%,” ICICI Securities said.