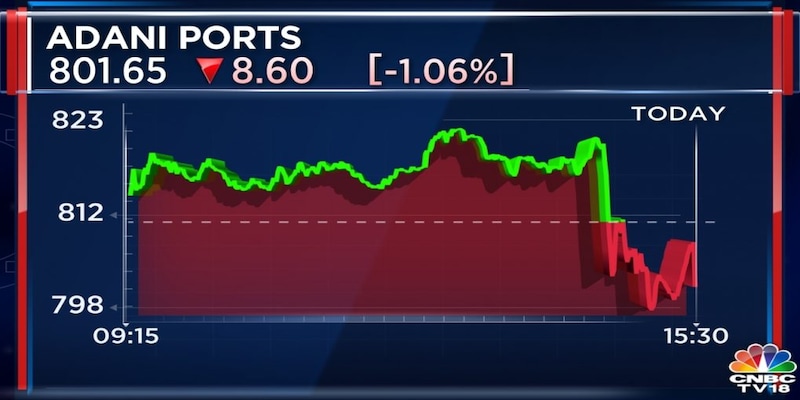 Forex loss was at Rs 1,201 crore in the quarter under review versus Rs 389 crore in the same quarter in FY22. Total revenue stood at Rs 4,638 crore during the period under review, down 0.7 percent from the corresponding period of the preceding fiscal year.
The stock ended the day on Monday at Rs 801.25, down 1.08 percent from the previous close.
At the operating level, EBITDA (earnings before interest, taxes, depreciation, and amortisation, a measure of a company's overall financial performance), declined 20.4 percent to Rs 1,804.6 crore in the first quarter of FY23 from the corresponding period in FY22.
Also Read: SBI Q1 net profit falls 6.7% at Rs 6,068.1 crore, misses Street estimates
EBITDA margin stood at 38.9 percent in the reporting quarter as compared to 48.5 percent in the corresponding period in the previous fiscal year.
Karan Adani, the CEO and whole-time director of Adani Ports, said the first quarter of FY23 had been the strongest in APSEZ's history, with a record cargo volume and the highest quarterly EBITDA. This is an 11 percent jump on a robust performance in the corresponding quarter last year that witnessed the post-COIVD demand surge.
The ports business, on the back of 8 percent YoY growth in volumes, delivered an 18 percent jump in EBITDA. The logistics business, too, experienced robust growth, with EBITDA increasing 56 percent YoY. The EBITDA margin of the logistics business expanded 370s basis points due to economies of scale and increased share of the General Purpose Wagon Investment Scheme (GPWIS) revenue stream.
Also Read: Tata Steel Q1 net profit falls 20.5% but beats estimates
He said the company continued this strong performance in July and recorded 100 MMT of cargo throughput in the initial 99 days of FY23 — "a feat never achieved before".
The container terminal at Gangavaram Port will become operational next month, while the 5 MMT LNG terminal at Dhamra will be ready by December end. This LNG terminal has a take-or-pay contract with a couple of oil and gas majors, APSEZ said.
Adani said the company is confident of achieving our full-year guidance of 350-360 MMT cargo volumes and EBITDA of Rs 12,200-12,600 crore.
During the first quarter of FY23, APSEZ handled 90.89 MMT of cargo (including 9.09 MMT at Gangavaram Port), which is an 8 percent YoY growth. The growth in cargo volume was led by dry cargo (+11.2 percent increase), followed by containers (+3.2 percent), and liquids, including crude (+5.6 percent). Though a small proportion of overall volumes, the automobile segment saw a 120 percent jump in volumes.
Also Read: NTPC Q1 net profit rises 17% but well below expectations
Check out our in-depth Market Coverage, Business News & get real-time Stock Market Updates on CNBC-TV18. Also, Watch our channels CNBC-TV18, CNBC Awaaz and CNBC Bajar Live on-the-go!