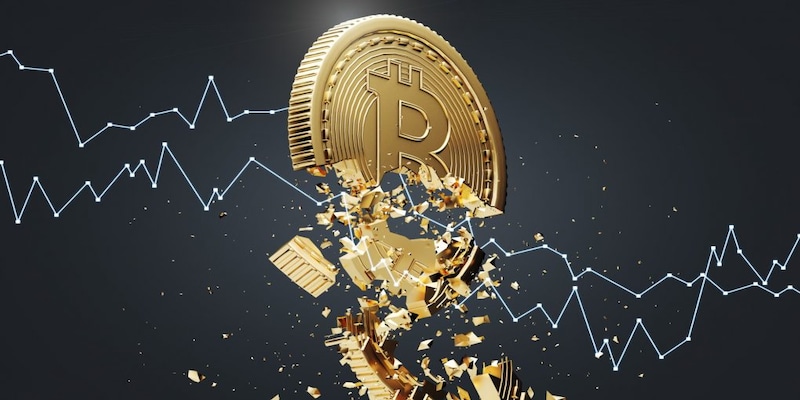 For every one step that Bitcoin takes, it seems to be taking two back as the market witnessed Tuesday. The world's largest cryptocurrency crashed and burned from the highs of $53,000 amid El Salvador's rocky rollout of Bitcoin as a legal tender.

While the market has staged a small recovery since then, Bitcoin is still well below the key psychological level of $50,000. The token was trading at about $45,832 as of 14:20 IST, having plunged as much as 17 percent a day ago. It is down over 10 percent now.
The downtrend has swept the entire market off its feet as tokens like Ether, Dogecoin, and Cardano trade 11, 15, and 12 percent lower, each. Only, Solana could somehow weather the storm, the coin was changing hands at $178, up almost 3 percent in 24 hours at 8 am IST. However, at the time of writing, it had also plunged nearly 12 percent.
According to some analysts, users on social media platforms like Twitter and Reddit had sensed the pullback coming in advance.
"Social media platforms were very cautious over the weekend that a plunge could occur following El Salvador's big day," Edward Moya, a senior market analyst told Bloomberg.
September 7, Tuesday marked the day when the tiny nation of El Salvador became the first country to accept Bitcoin as a legal currency besides US Dollar. Tweeps and Redditors had made plans to buy Bitcoin worth $30 to mark this day. It was declared Bitcoin Day.
Businesses across the country will be now required to accept Bitcoin in exchange for services. However, technologically challenged businesses will be exempt.
The first day with Bitcoin as a currency was off to a bumpy start. It was majorly due to some technical glitches on its official digital wallet, Chivo.
Also Read | El Salvador’s historic adoption of bitcoin endures bumpy first day
A day before El Salvador's big day, Bitcoin was trading at a three-month high of $52,000, a level it had only once touched on August 23. On Tuesday morning, the coin was close to hitting $53,000, a level it hasn't seen since May 2021. However, hours later at 5 pm Eastern time, it was changing hands at $46,700 - down nearly 10 percent.
While Bitcoin enthusiasts around the world seemed to show their support at the beginning of the day, by the end of it, they were off to book profits. Or at least, that's what analysts say.
Some investors likely bought Bitcoin in anticipation of the nation implementing its Bitcoin law and then moved to "sell the fact," Moya said.
The crypto market value declined by about $300 billion in the past 24 hours, data from CoinGecko showed.
Regardless of the fall, El Salvador maintained a tough exterior. Its President Nayib Bukele said the country has bought the dip, over 550 Bitcoins.
Why did the market crash?
Analysts believe it was about time. The market was running strong over the last eight weeks and became overvalued. The El Salvador rollout may have been the last nail in the coffin that sent the market plunging.
"The market has been overextended for the last six weeks without any significant pullback," Kevin Kong of crypto hedge fund BKCoin Capital told CoinDesk.
He said altcoins' rally is a sign of frothiness in the market. Altcoins like Bitcoin Cash, Litecoin, and EOS "typically make their move towards the end of the cycle," he said.
The cryptocurrency market was slowly recovering from the shocks of May when the price of Bitcoin slumped by almost 50 percent to $30,000 for a small time. However, increased interest from large institutions and companies since then have encouraged investors to jump the wagon once again.
However, there are other factors at play. The crypto market is a volatile market as it lacks economic fundamentals that could lend support to its value.
Several analysts believe the market may be sensing the Federal Reserve, the central bank of the United States, ready to harden its easy monetary policy. Reduced interest rates could eventually decrease the liquidity in the system, making investors warier of risky assets like cryptocurrencies.
Some traders also reported instances of order failures. Late Tuesday, Coinbase, a crypto exchange, noted it was investigating instances of partial outages that were causing order failures. Kraken, another crypto exchange, had also reported some delays in funding because of issues with banking purchases.
Also Read | Bitcoin is 'millennial gold' now, says Aswath Damodaran
(Edited by : Abhishek Jha)
Check out our in-depth Market Coverage, Business News & get real-time Stock Market Updates on CNBC-TV18. Also, Watch our channels CNBC-TV18, CNBC Awaaz and CNBC Bajar Live on-the-go!