In what may be the biggest cyber fraud bust in India, Uttar Pradesh cybercrime police unearthed a Rs 3,000 crore online job scam wherein money was laundered to countries like China, the Philippines and Vietnam via cryptocurrency. Fraudsters sent lakhs of bulk SMS/WhatsApp messages across India after the first COVID lockdown, and several people fell prey to this fraud. The one-of-its-kind investigation includes examining several cryptocurrency accounts, exchanges, and shell companies operating in foreign countries.

Law enforcement agencies were tracking a mere Rs 2 lakh job scam in Bareilly. They found a mail trail in the process, which revealed that Rs 3,000 crores from this racket had already been siphoned off to countries like China and the Philippines using cryptocurrency wallets like Binance, Smart Cont, OK Coin, etc. The big question now is how to get the money back?
It began in Bengal
Uttar Pradesh’s cybercrime department arrested a man from West Bengal connected with the cyber fraud case in Bareilly. The accused, identified as Manzurul Islam, was arrested for defrauding a woman from Bareilly of Rs. 2.1 lakh in October 2021. 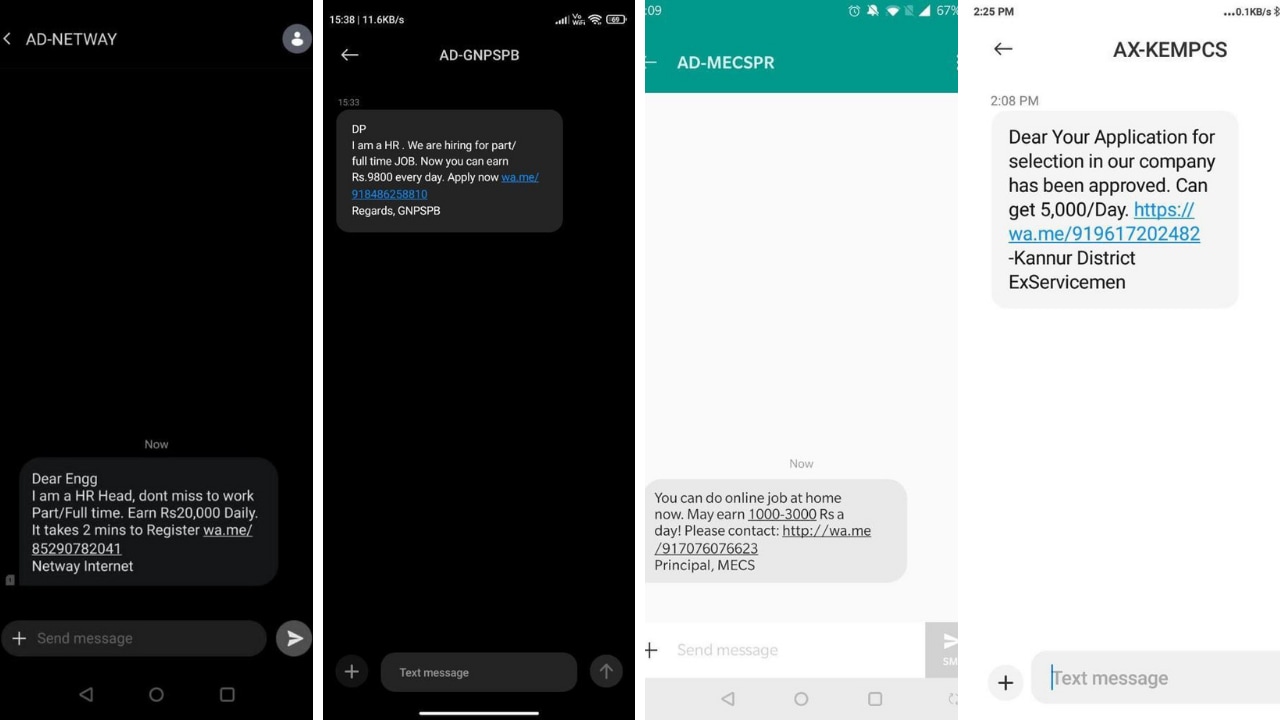 Triveni Singh, superintendent of police (SP), cybercrime, UP, said, “The accused asked the victim to click on a link and register herself for the job for Rs 100 only. The woman was then offered Rs 200 in return for investing Rs 100, and an e-wallet was created. Over a period of some days, the woman continued to invest money and eventually discovered that she had been cheated of over Rs 2 lakh.”
Also Read: Explained: Crypto launchpads and how they benefit investors
Singh said these fraudsters sent lakhs of bulk SMS/WhatsApp messages across India in a day, and several people fell prey to this fraud. This started during the first Covid-19 pandemic lockdown in the country when people were either looking for a work from home opportunity on the side or had lost their jobs and were looking for a new one.
Money laundering via crypto
The investigation revealed that this money was transferred to three different UPI IDs, and the amount added up to over Rs 3,000 crore. Singh said the entire amount was then converted into cryptocurrency by creating wallets on Binance, Smart Cont, OK Coin, BitPie, etc. In addition, the money was also transferred utilising different trusts, firms, and NGOs.
“So far, investigations have revealed that 256 wallets of different cryptocurrencies have been used to transfer Rs 1,413 crore, including six wallets in India, while other wallets were created in China, Malaysia and the Philippines. Besides, the bank accounts of as many as 46 companies, trusts and firms have been used to transfer over Rs 1,500 crore. Twelve of these are shell companies,” he explained.
Also Read: 5 things you should not do when investing in cryptocurrencies
Singh further added that an investigation is going on to ascertain how big is this nexus in India and how they operate.
Getting money back – is it even possible?
Rohas Nagpal, Chief Blockchain Architect at the Hybrid Finance (HyFi) Blockchain, said the moment money moves out of an exchange-controlled address, tracking it down becomes difficult.
“If something like a Bitcoin is used by criminals – it is pseudo-anonymous and can be still tracked down. But, many savvy criminals now use Monero – these are called privacy coins. If used, it becomes next to impossible to track it down. The moment something enters a Monero address, it is gone,” said Nagpal.
“As long as it is a bank account, we still have some arrangements with various countries and things can be tracked, but for crypto – as of today, there is nothing,” Nagpal added.
Legal remedies
Prashant Mali, Cyber Crime & Privacy Lawyer, said legal remedies pertaining to these cases are long and tenuous.
“We have to go under the mutual legal assistance treaty (MLAT) under which the police have to act to first seal the accounts. Then initiate a police/court inquiry based on jurisdictions where the money is parked. And then, if that court finds the money from the fraud proceeds, they can order to return the money to Indian police agencies. Then the victims in India can go to the court where the case is lodged and apply for return of property and get their money back,” said Mali.
Also Read: Bitcoin Mining in US: Fort Worth embraces it; New York contemplates ban
“But the problem with this is you never know if the money is still lying around in the said accounts. Catching cyber fraudsters and getting money back from them are two different things. So, this may be a big case that we have cracked, but who will return this money to the victim is not an established pattern here. There is a big lacuna in the law,” Mali added.
Indian government is worried about crypto
Finance Minister Nirmala Sitharaman, in an interaction at Stanford University on Thursday, reiterated the need for comprehensive global regulations on cryptocurrencies and said that India would not rush through introducing regulations on the use of cryptocurrencies.
“So, our intention is in no way to hurt this (innovation around crypto)… but we need to define it for ourselves,” she said, adding that cryptocurrencies can also be manipulated for money laundering or terror financing.
At the spring meeting of the International Monetary Fund (IMF) earlier this month, Sitharaman said that India was concerned that cryptocurrencies and blockchain-based technologies could be used for money laundering.
“Regulating cannot be done by a single country within its terrain through some effective method. And for doing it across borders, technology does not have a solution which will be acceptable to various sovereigns and, at the same time, is applicable within each of the territories,” Sitharaman said.
Investigations ahead
According to Singh, the role of the bulk SMS provider/SMS aggregator and the telecom operator is under scrutiny right now.
Before sending out, every header of bulk messages is approved, and communication is reviewed, according to Singh, but somehow these criminals got different messages approved but sent something else entirely.
The police are looking into whether or not this is a violation of the Telecom Regulatory Authority of India (TRAI) rules.
Check out our in-depth Market Coverage, Business News & get real-time Stock Market Updates on CNBC-TV18. Also, Watch our channels CNBC-TV18, CNBC Awaaz and CNBC Bajar Live on-the-go!