Bitcoin prices recovered from Wednesday morning rout to surge over 5 percent as Indian markets remain in tenterhooks about the possibility of a Bitcoin ban. On global exchanges, it was trading 1 percent higher. Elsewhere, Collins Dictionary has announced NFT as the word of the year. Check out top crypto news and prices here

Bitcoin, the world's largest cryptocurrency, extended the recovery it had staged after crashing over 25 percent Wednesday morning. It is currently trading over 5 percent higher at Rs 42.96 lakh on the Indian exchange, WazirX.
Bitcoin prices had crashed Wednesday after a government bulletin said the cryptocurrency bill seeks to ban all private cryptocurrencies in India. The bill also aims to create a framework for a rupee-based digital currency.
Private cryptocurrencies are privacy-based coins issued by private platforms that allow users to transact without having to make their data public. Some popular private coins are Monero, Dash, and ZCash.
As prices of the major coins crashed after the news, most experts suggested investors not to short sell their holdings. "Our belief is the government will move towards regulation rather than a ban ... So from our side, the message is: Do not short sell. And do not sell your crypto below the market price," CEO of ZebPay, Avinash Shekhar told CNBC-TV18.
Later in the day government sources told News18 that the government may not be thinking of any blanked ban on cryptocurrencies but it could bring legislation to regulate the crypto markets. A discussion on the bill was expected to happen in the Cabinet on Wednesday, but sources said it wasn't taken up. However, the Finance Ministry has circulated the note today, meaning it could be likely taken up for discussion soon.
The cryptocurrency bill is expected to be listed in the Winter session of the parliament. Here is the top news from the crypto market from India and the world, along with global coin prices with data from CoinMarketCap.
Also Read | Explained: RBI's concerns and systemic problems on cryptocurrencies
A. Cryptocurrency prices
B. Crypto technicals
Bitcoin's weekly timeframe shows the chart traversing within the ascending channel pattern with the key support at $53,000.
The weekly timeframe for BTC trend shows the chart traversing within the ascending channel pattern with the key support at $53,000, a spokesperson from the WazirX trade desk said. 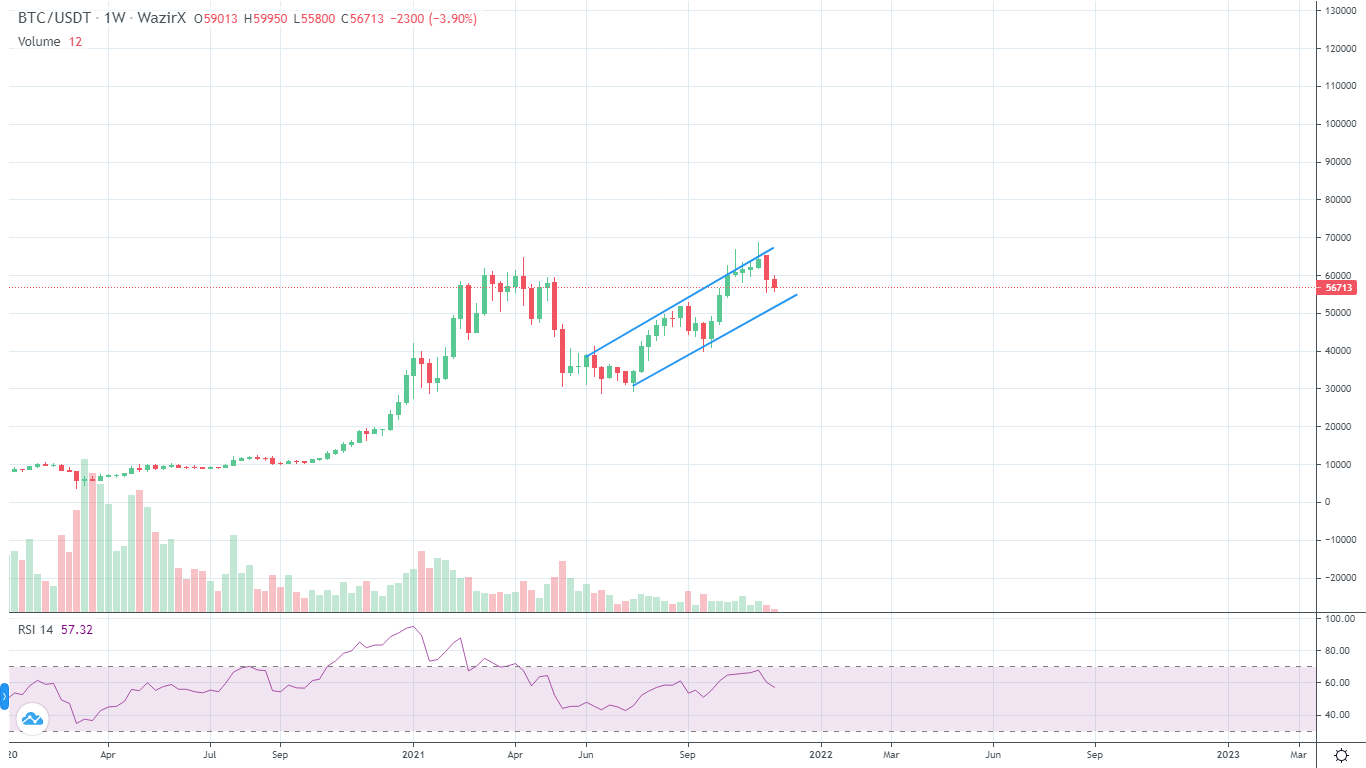 C. Top cryptocurrency news
Official digital currency will kill cryptos: Ex-Finance Sec
SC Garg, former Finance Secretary told CNBC-TV18, the time for digital currencies has come and once they are launched private cryptocurrencies will automatically go away. More here
NFT is Collins Dictionary's word of the year
Collins Dictionary has chosen NFT (non-fungible tokens) as the world of the year as the interest in the asset class surged. Collins has defined it as a "unique digital certificate, registered in a blockchain, that is used to record the ownership of an asset, such as an artwork or a collectable."
Bitcoin was trading cheaper in India Wednesday compared to global prices, here's why
Bitcoin price fell to a low of Rs 33.5 lakh on Wednesday morning, per data from cryptocurrency exchange WazirX. It was down over 25 percent from the previous day’s close. However, the price of bitcoin fell only over 2.5 percent to $56,000 on Binance, the world’s largest exchange by volume. The price differential was because prices on different exchanges are driven by different own demand and supply figures, which opens an arbitrage opportunity. Read here
Most cryptocurrencies will not survive, says Raghuram Rajan
Raghuram Rajan, former RBI governor has said of the 6000-odd coins, only a handful will survive. It is because they will become pricier down the line and that is a bubble, Rajan told CNBC-TV18. He also compared the crypto mania to tulip mania in the Netherlands in the 17th century. Read here
Regulate cryptos to stop manipulation by China and Russia, says Hillary Clinton
The former secretary of the state, Hillary Clinton said the cryptocurrency markets need strong regulations to avoid manipulation at the hands of Russia and China. Clinton was speaking to MSNBC on the "technology of all kinds" and said states and non-states can use these technologies to destabilise countries.
Morgan Stanley increases exposure to Bitcoin
US investment bank Morgan Stanley has increased exposure to Bitcoin by purchasing shares of Grayscale Bitcoin Trust. The bank increased holdings by over 60 percent in the second quarter of 2021.
(Edited by : Abhishek Jha)
EXPLAINERS
Explained: What are private cryptocurrencies? How they are different from public ones

By design, transactions of these cryptocurrencies are linkable and traceable. Therefore, organisations dealing with sensitive information—like commercial contracts or individuals’ personal information—prefer to join a private blockchain. Private blockchains include Monero, Particl, Dash, and Zcash. These platforms allow users to transact without making the data public.