One of new altcoin in the market, Aptos recorded a sharp growth of around 290 percent since the beginning of the year. The altcoin reached its all-time high price of USD 14.52 on January 22, 2023. So, what is contributing to this enormous rally? In this article, we will investigate Aptos and reason behind this terrific price rally.

The broader crypto market is off to a good start in 2023 after a nerve-wracking previous year. Bitcoin has been rallying above the $22,000 level for the first time in the past two months, while some altcoins have been performing great.

One of these altcoins is the Aptos token, a relatively new altcoin in the market which recorded a sharp growth of around 290 percent since the beginning of the year. In this article, we will investigate Aptos and what is causing this terrific price rally.
Aptos, the ‘Solana-killer’
The Aptos coin (APT) was launched in October 2022 and owing to several innovative features embedded in the project, many dubbed it the ‘Solana-killer.’ However, it seems that the APT project enjoys great community support.
Also Read: Top 5 crypto presales to watch out for this month
Ever since the beginning of the year, APT has been on a constant rally. APT has gained over 50 percent in the last 48 hours and more than 108 percent over the past week, surpassing other popular altcoins such as Solana (SOL), Ethereum (ETH), and even Bitcoin (BTC). 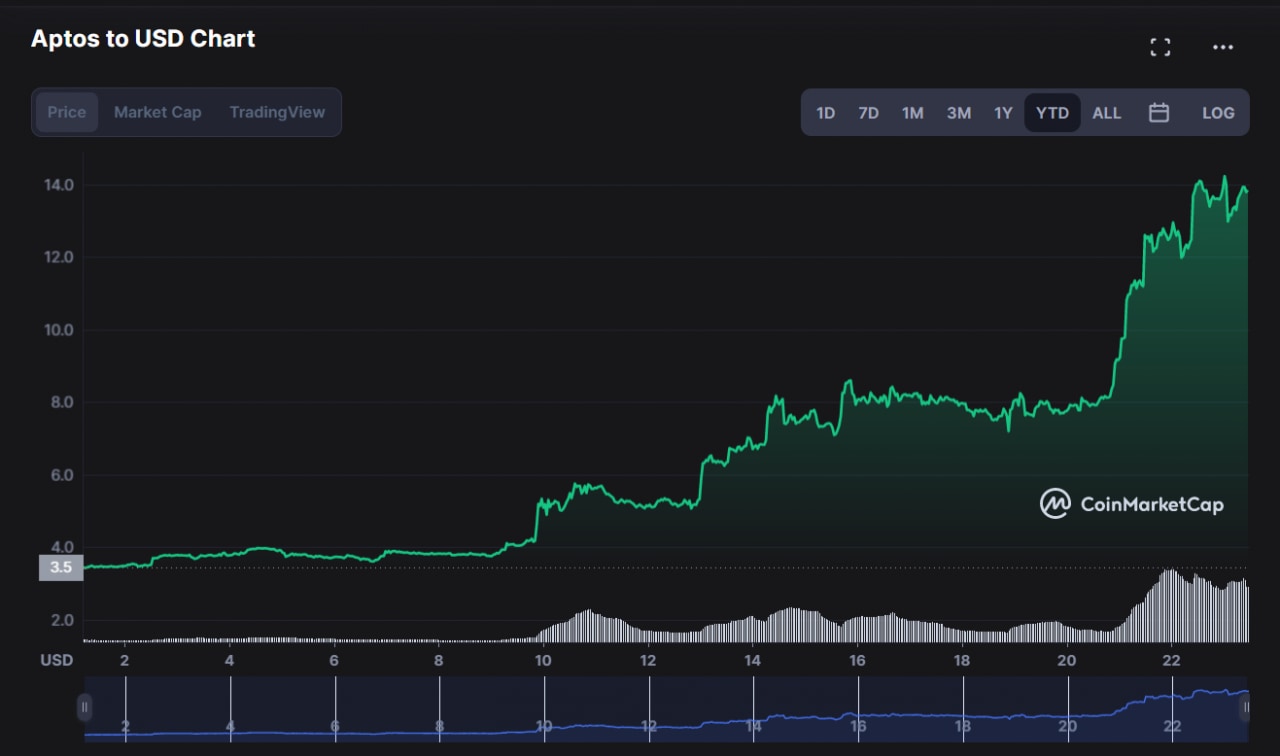 Source: APT/USD (CoinMarketCap)
So, what is causing the APT rally?
The token has been on a meteoric rise, owing to continued support from the fans and community. Aptos reached its all-time high price of $14.52 on January 22, 2023.
So, what is contributing to this enormous rally? Well, there are multiple factors at play here. As mentioned before, Aptos is relatively new, and it packs many unique features that make the project appealing to the masses.
The Aptos chain utilizes a completely new programming language, known as Move. The programming language was primarily designed for an abandoned project by Meta, known as Diem. The creator of Aptos, Mo Shaikh stated that the team of developers behind Aptos wants to work on the vision of Diem and create a scalable, fast blockchain that can be compatible with mass adoption and usage.
Moreover, they have been joined by the developers of CryptoKitties, the popular Ethereum-based NFT (Non-Fungible Tokens) games, as they have implemented a protocol named Jolteon through the Flow blockchain, which was also created by them. The Jolteon protocol however was created by the Aptos executives.
Eyes on DeFi (Decentralized Finance)
According to Aptos CEO and cofounder Mo Shaikh, 2023 will be a great year for Aptos and has urged fans and supporters to keep an eye on the Decentralized Finance (DeFi) initiatives on the platform. From parallel transaction processing to Decentralized Exchanges (DEXs), Aptos will venture and spread its tentacles across the DeFi space, while giving tough competition to some of the top smart contract-enabled blockchain platforms like Solana and Ethereum.
Moreover, PancakeSwap, the biggest decentralized crypto exchange existing on the BNB Chain, announced on January 6 its deployment on the Aptos blockchain. The decision was finalized after their user community approved it. As soon as the announcement was made public, the APT prices skyrocketed by almost 97.6 percent.
Following this announcement, one of the best cold crypto wallets in the world, the Atomic Wallet, stated that they would provide support for the token on their platform. Atomic Wallet has more than 3 million followers. Thus, APT will reach a massive number of users through them.
Last but not least, a major boost for APT, came from an announcement made by the largest crypto exchange in the world, Binance on January 20. As per the announcement, Binance is increasing the listing fee for new projects on their platform to 3 percent from 1 percent. Team Binance stated that their Liquid Swap service would now include APT/BTC and APT/USDT trading pairs.
A listing on Binance is one of the best ways to get attention in the market and Aptos has been pretty successful so far. At the time of writing, APT was trading at $13.78, down slightly by 1.79 percent over the previous day.
In Conclusion
Aptos is one of those emerging coins that has managed to get the attention of the masses and create community support for itself, thanks to its diverse array of features and services.
However, this sudden spike in prices has led to speculations regarding whether it is market manipulation or not. Perhaps it is too early to decide anything. The present stat on the coin seems quite bullish, although the Fear and Greed index remains neutral for APT. However, if you are planning to invest in the Solana-killer, it is always recommended to conduct thorough market and project research before doing so.
Also Read: Everything you need to know about Aptos, the newly-released ‘Solana killer’
(Edited by : Anushka Sharma)
Check out our in-depth Market Coverage, Business News & get real-time Stock Market Updates on CNBC-TV18. Also, Watch our channels CNBC-TV18, CNBC Awaaz and CNBC Bajar Live on-the-go!