Zarna Garg: the zany, outspoken voice of the Indian-American woman

Updated : January 19, 2020 03:31 PM IST
Now she started out as ‘The Funny Brown Mom’ and her stand-up comedy caught up with the Indian community like wildfire.
Starting next month, Zarna Garg will be debuting her very own monthly show at Caroline’s on Broadway, the world-famous comedy club in the heart of Times Square.
So from a high-powered lawyer to a stay-at-home mom to a stand-up comic and award-winning scriptwriter, Zarna Garg has done it all.

An Indian woman can direct her life in any which way she wants and succeed on her own terms. Ask New York-based Zarna Garg. When she was just 15 and living in Mumbai, her mother died and the day after that, her father wanted to get her married. Garg recalls, "He said he was done with parenting and I couldn’t stay in his house otherwise. I knew then that I had to break free." Zarna Garg had no intention of an early arranged marriage and so for two years, she stayed with relatives and friends in order to finish her schooling before moving to America, to her older sister’s home in Ohio where she did college and later law school at a breakneck speed, knowing that her father still intended an early arranged marriage for her while she aspired to be an independent, professional woman with a fulfilling career.

After law school and having started a working life, she was ready for marriage but on her own terms. Her father tried one last effort with ‘viewings’ at a marriage convention but she decided to take things into her own hands and 're-arrange’ things. Garg crafted her own outspoken ad for an Indian matrimonial website where most ads had been composed by parents. She wrote: "You have to be street-smart, academically brilliant and ready to build a life with me: please no ‘friends’ – marriage only."

Amongst several responses, she heard from an Indian living in Switzerland who wrote to her that she was obnoxious! Surprisingly, it turned out to be the perfect match. Several emails later, they not only became friends but met in New York where she was now working. Shalabh Garg and she were married within months. As she recalls, “Ever since, we’ve lifted each other up. Initially, I supported him while he studied and then he worked as we built our family. We’ve been married 21 years and have three kids. I’ve always had big dreams and he’s been my biggest cheerleader.” (In fact, when Garg shared the story of her life on Humans of Bombay, it received 33,756 likes.)

One of her hidden dreams was to be a writer and one of the first things she did was write her own story about her escape from an arranged marriage and immigrating to America to find true love and a career there. She turned the scepter of an arranged marriage into an adventure finding education, love, marriage and career – all on her own terms. She says, "My dream of screenwriting started from a frustrating place of not seeing any brown movies in the west that represented the fun of being Indian. All the Indian stories seemed sad and hopeless. For many years, I thought someone will make that movie. Finally, two years ago I decided I will take a shot at it. I learnt how to write screenplays, how to create a story and structure." Zarna Garg, the immigrant experience.
It paid off - her comedy script ‘Rearranged’ was selected as a semi-finalist at the 2019 Academy Nicholls Fellowship competition and won the Best Comedy Screenplay Award out of 11,000 scripts at the Austin Film Festival.

Women have often had issues about child-rearing and re-entering the workforce. Garg, who had been a practising lawyer, had left the field for 15 years to bring up her children. At 44 she was looking to jumpstart her career – but once again on her own terms – now as a writer and stand-up comic. In a world where women are told what they can and cannot do, and when they can do it, she decided to challenge the stereotypes and follow her own drummer.

She had never performed but in a sense, she had always been performing because with family and friends she was always the one who made everyone laugh. Now she started out as ‘The Funny Brown Mom’ and her stand-up comedy caught up with the Indian community like wildfire. After all, who doesn’t love laughing about Indian husbands, mothers-in-law and Big Fat Indian weddings? All of a sudden, she was in demand at women’s events, lunches and comedy clubs for topics which hit a chord with desi audiences. 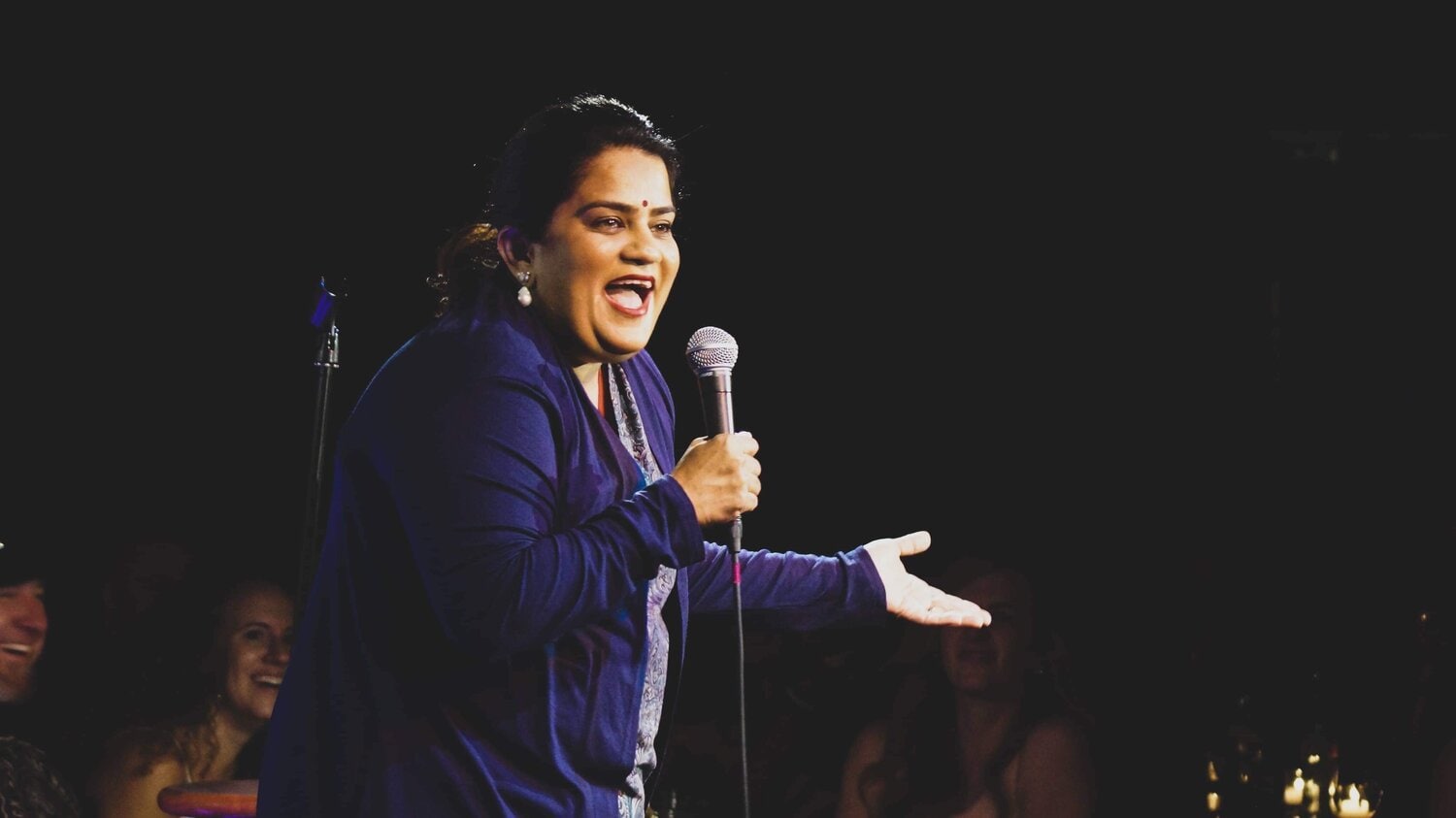 Zarna Garg, the stand up comic.

"I thought my five friends will come to watch me do my comedy, instead I’ve been inundated from all over the world,” she marvels. “People are curious and excited. There are almost no Indian immigrant female comedians who do family, culture and everyday life jokes.” What’s been even more of a revelation is how the mainstream comedy audiences also seem to enjoy her humour. “Everyone in America has an Indian friend, relative, teacher, doctor - we are all one in the end!”

Garg has managed to transcend the 'brown' label and move on to different and bigger crowds – she has produced and performed in multiple comedy shows in comedy clubs across NYC including the groundbreaking HinJews shows in collaboration with stand-up comic Felicia Madison. As she says, “I realised that anyone wanting to watch comedy, brown or not, was coming to watch me.”

Starting next month, Zarna Garg will be debuting her very own monthly show at Caroline’s on Broadway, the world-famous comedy club in the heart of Times Square where New York’s top names from Jerry Seinfeld and Rosie O’Donnell have performed. For her, it’s a high to bring the immigrant experience to this noted venue.

After a few minutes of talking to the veteran head booker at Caroline’s on Broadway, he gave her a show immediately because of the demographics of the Indian community. She says, “They understood that this modern immigrant perspective and this aspect of storytelling has not been explored yet in comedy, even though it affects a big demographic in the city.”

To those women who are re-entering the workforce, Zarna Garg has become an inspirational and motivational figure, showing that one can set one’s own time-table to manage family and career success. Was she ever apprehensive about getting into a field as volatile as a stand-up comedy?” 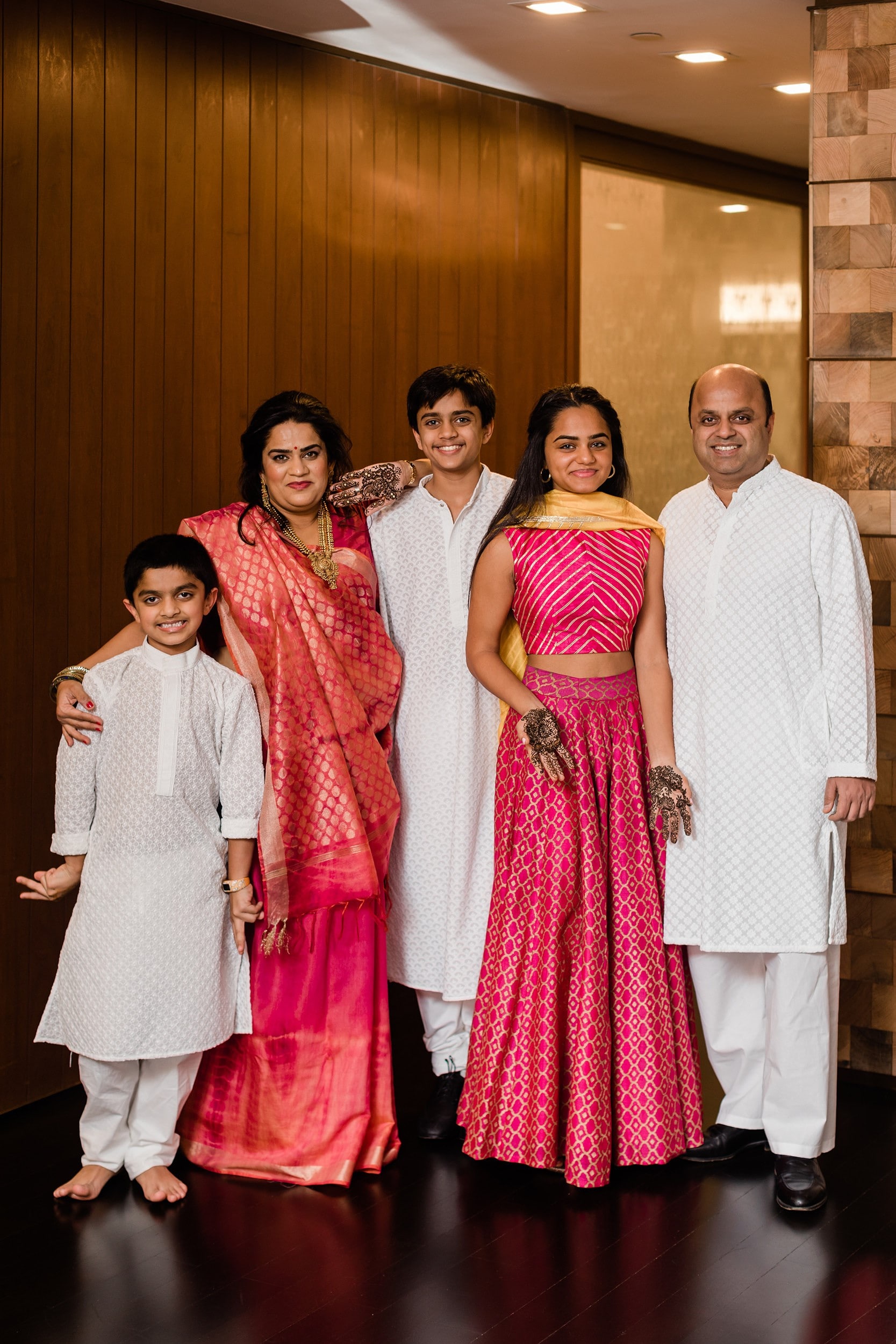 “I was for a minute and I got over it. I’m 44 years old - I refuse to be treated like I’m on my death bed. I see a lot of value in my experiences and won't allow anyone to discount them because I wasn't able to work sooner. I’m proud of the fact that I focused and raised a loving family; that is a real job and anyone who does it with integrity will tell you that you gain life experience that you just cannot any other way.” Indeed, the biggest bonus is that her close-knit and fun family – Shalabh and her three children - are her biggest supporters.

Garg says her secret mantra for success is that she is a lifelong learner and continues to learn, whether it be script-writing or comedy. She says, "I learnt the basics of comedy from the best of the best and hold myself to the highest of standards, which is the only way you can survive in the world capital of comedy – New York City."

So from a high-powered lawyer to a stay-at-home mom to a stand-up comic and award-winning scriptwriter, Zarna Garg has done it all. "I want to be the global Indian female comedian with an educated, sharp woman's unapologetic viewpoint," she says. "Indian women have opinions and must share them if we are to make the world a better place - this is no longer an option, it’s a requirement and I speak with women every day to encourage them to get involved at the level they feel comfortable."