A renowned historian of ancient India, Professor Nayanjot Lahiri has written on subjects such as the life and times of King Ashoka and the Indus Valley civilisation. Her work is quoted in academic circles, and her views are sought by media and government alike. Which is why her latest work, Time Pieces: A Whistle-Stop Tour of Ancient India (Hachette India, Rs 399), is a bit of a surprise. Unlike the gravitas of her previous works, this one has been written for a lay reader, even young adults, who would be interested in history with a pinch of salt and a bit of teekha tadka. 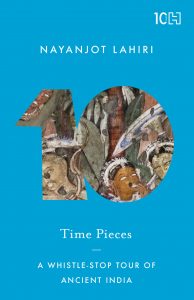 Lahiri writes about food, hygiene, death, identity and so on, in the India of yore. Most interesting is the idea of love and sex in ancient India as well as antiquity. For those of us who looked up to the West for feminist idols – from iconic writers like Germaine Greer and Virginia Woolf, to the legendary entertainer Madonna, to media giant Oprah Winfrey – and for those of us who have battled everyday sexism in our homes, workplaces and on the street, the priority that men had placed on women’s needs and feelings in ancient India comes as a pleasurable eye-opener.

Perhaps it has always been there at the back of our minds. After all, many of us have heard of or read the Kamasutra where love is an idea that transcends narrow barriers. It is here that Lahiri, with her brilliant narrative and skills as a historian, weaves together unconnected pieces and holds a mirror to modern Indian society, which is seen as misogynistic and indifferent to women’s desires and aspirations. That women are meant for procreational purposes alone has a theoretical religious underpinning.

Things have changed somewhat, thanks to women asserting themselves in modern India, but it has not come without collateral damage within the institution of marriage, especially since it was built on patriarchal foundations. That pleasure in love and sex is what women also need to enjoy is still difficult for many men to come to terms with. Delving into sculptures and other forms of art that depict explicit love games typical of ancient India, Lahiri writes, “Much before amorous duos and inventive menage a trois in stone of Khajurao in middle India and Konark in eastern India, the sculptors of ancient India had a field day moulding clay into heterosexual and same-sex postures.” She goes on, “…a first-century example from Kausambi in Uttar Pradesh renders a couple in sexual intercourse with the legs of a presumably climaxing woman raised as high up in the air as her soul is emotionally.”

The author rues that all these are a far cry from the “censoriousness and prurience that now dominate the Hindu ethos and curtail sexual freedom”. She also argues, armed with anecdotes from ancient texts, that romantic love was once as important within marriage as without.

Some of her pronouncements are sure to kick up a storm, but Lahiri deserves loud applause for writing this unputdownable book that familiarises the younger generation with various facets of ancient India. History can sometimes hold the keys to our future.