When expats take forward the traditions of their adopted countries

When expats take forward the traditions of their adopted countries 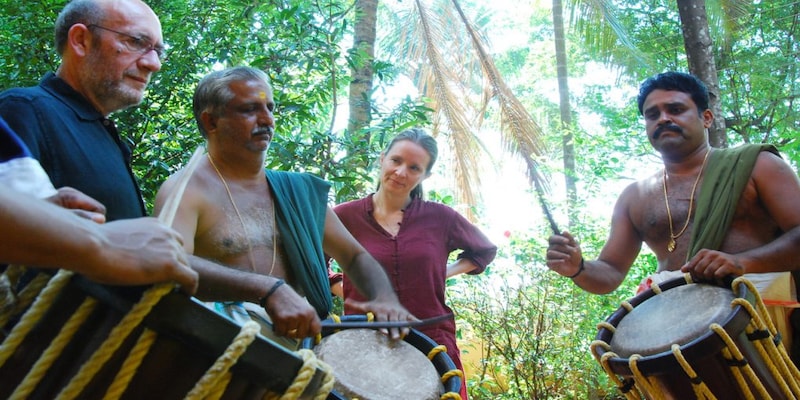 Living in Mallorca for 30 years as an expat, I became aware of the children’s poem La Balanguera by Joan Alcover i Maspons written in the late 19th century, which was adapted to become the national anthem of the Balearic Islands in 1996. It is a story about a woman who works as a weaver. Not only does she spin cloth, she also spins and weaves the threads and memories of the local culture: traditions that will survive her so that the roots should not be forgotten.

Women are often seen as the heart of the family, giving hope, relaying tradition to the next generation, and being inspirational role models. Yet as an expat, living in another country, amidst a foreign culture, what type of threads do you weave? This was the question I posed to Deborah Claire Procter, a multimedia artist originally from Wales, UK, now living in Argentina, and Lyn Bishop, an American healer and spiritual coach living in Panama. This is what they had to say.
----
Deborah Claire Procter Deborah Claire Procter
I love how the poem evokes for me images about weaving “from traditions and from hopes”. I can imagine that back and forth movement – it is hypnotic. It reminds me of the need to look over our lives again and again. To reposition ourselves. To never stop looking, listening, sensing… this can be from changing perspective radically as I did in 2002 when I began visiting Argentina.
My first impulse for change was based on the fact that there is a community in the south of Argentina who moved here from 13,000 kilometres away – from Wales, UK. It may be a minority language yet Welsh is still spoken to some degree. My other fascination with the country was much more intuitive and stemmed from childhood. I knew off-by-heart all the lyrics to the musical about the life of Eva Perón – Evita. Eva Perón came from humble beginnings and became the wife of former president of Argentina, Juan Perón, and always urged him to consider the lives of the poor. She is famous for founding schools and libraries but was also hated by some because she shook up the traditional system.
In Argentina, a second image that is powerful for me is that of the grandmother. During the time of dictatorship (the 1970s and ’80s), many young activists disappeared. Many were pregnant at the time and so the “grandmothers” search for their lost grandchildren. For many years they have silently marched with their famous headscarves. It is inspiring to think that a grandmother can be an active voice in society and part of the collective conscience.
I think, as women, our creativity is about weaving between hopes and traditions. We don’t have to change everything but we do need to re-evaluate many things. If something needs shaking up, we have the ability to do so. Whether I work as an artist or as a mentor, I am always looking for what is missing, what is needed, and what is being called forward. I strongly believe that we can and must use our imaginations to find a better solution for the world. In effect, we all weave our own traditions and hope; you just have to choose what you want to focus on.
(Lead image: Deborah on a research trip to Thrissur, Kerala, India, in 2009 with Argentinean composer Oscar Edelstein to meet chenda artist Peruvanam Kuttan Marar)
Lyn Bishop Lyn Bishop
“Turning her glance to the past, she guards the shades of ancestry and of the new spring” is a line from La Balanguera that resonates deeply with me. It is from our past experiences and history that we can move confidently into each new day, each new opportunity that life so willingly brings us.
It wasn’t until I was a grown woman in my 30s that the wanderlust took over me. It was more than the mere desire for travel and adventure, but rather a deeper calling to understand culture and tradition, to know the other, and to experience life from a different perspective.
One of the biggest gifts I received from spending several years as a nomad is that I learned there are many ways to live a full and rich life. Thinking that my cultural upbringing was “the way” began to be replaced by knowing that it is only “one way”. This gave me a deeper respect for “all ways” of living life to its fullest potential. Lyn Bishop
Having settled in Panama for the past 10 years, I continue to study with curenderos (healers), indigenous shamans and wise elders in an effort to live more simply and sustainably. Panama is a place that continues to practice ancient traditions while being pulled quickly into modernity. People still look to the plants for their medicine, the soil for their food, and the jungle for their enlightenment. It is also the hub of the Americas, Latin America’s financial centre, and is home to the Panama Canal.
Finding the balance between conserving our collected wisdom while embracing new ways of being is at the heart of the work I do with my clients. I work with women to own their past with grace and honour. I help them embody their confidence to live their happy, vibrant life in the here and now. It’s my mission to help as many women as possible to achieve their best life.
----
Traditions are what we create; they start somewhere, some resonate, others change and grow. What traditions would you like to weave into the future?
First published in eShe magazine
Check out our in-depth Market Coverage, Business News & get real-time Stock Market Updates on CNBC-TV18. Also, Watch our channels CNBC-TV18, CNBC Awaaz and CNBC Bajar Live on-the-go!