What happens when your baby is born at the same time as your startup!

What happens when your baby is born at the same time as your startup! These three entrepreneurs gave birth and set up ambitious startups at the same time. How did it go for them? Read on to find out.

Launching a startup is as hard as having a baby, and then imagine doing both at the same time! We speak to three young women who did just that.

VIDUSHI MALHOTRA, INGENIOUS FACES
Vidushi Malhotra’s Ingenious Faces works with leading universities across the world to enable industry-based learning and global growth for students and entrepreneurs. With its headquarters in South Africa, her startup works in India, Netherlands, Belgium, France, Spain, Finland, Israel, Rwanda, Singapore and UAE.
A development professional and entrepreneur, Vidushi has worked all over the globe in the development sector, impacting learners and marginalised communities. Born in Delhi and raised in Bangalore, Vidushi pursued development studies at the University of South Africa. 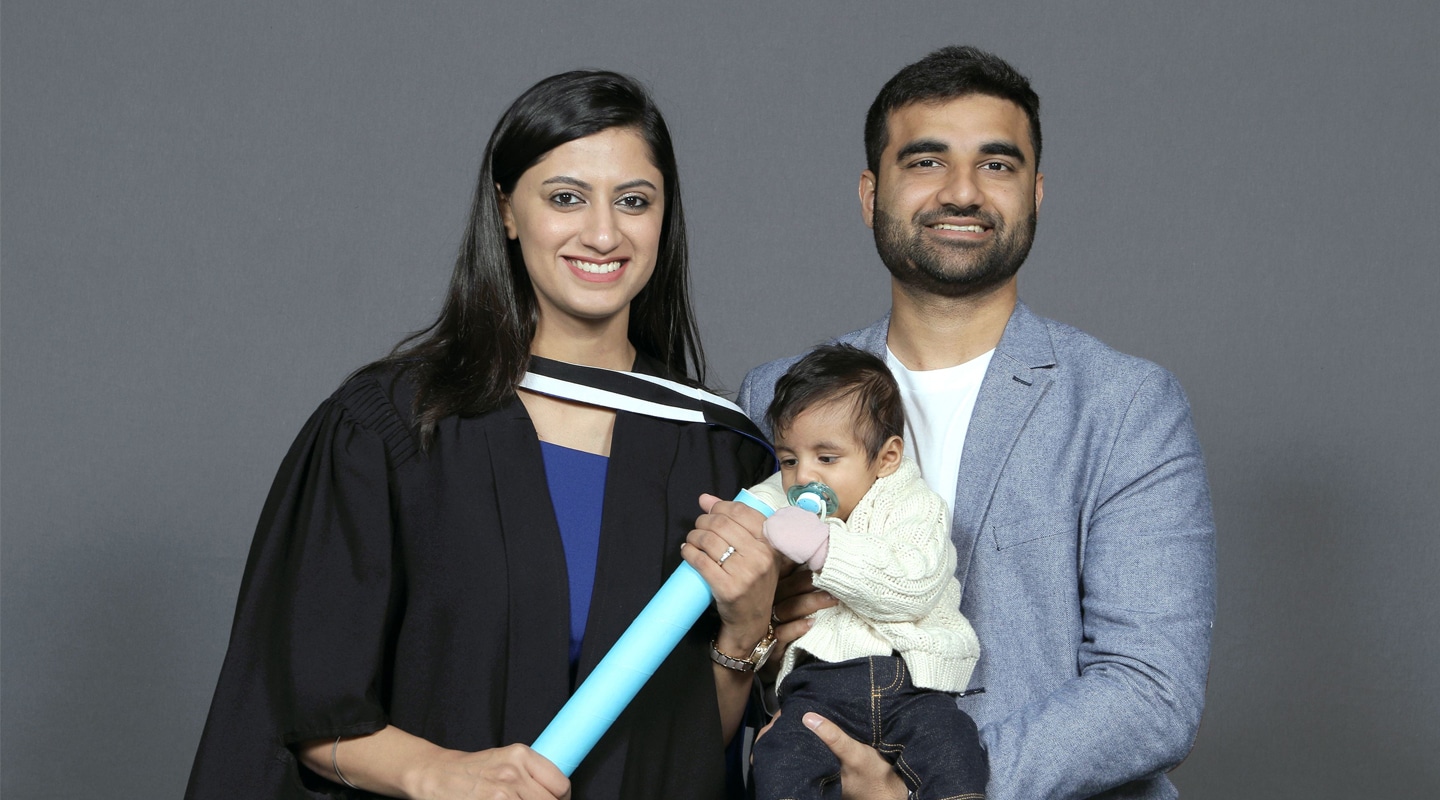 Vidushi holding her Master’s degree with baby Meir and husband Apoorv
Later, while doing her thesis for her Master’s in social development from University of Cape Town, and just one month after she and her husband launched Ingenious Faces, she found out she was pregnant. “In fact, I graduated this year when Meir was four months old. I had my degree in one hand and baby in another,” she smiles.
They clearly remember the day they found out about the pregnancy. “We were in Amsterdam, running a programme for early-stage startups from Africa and Bangladesh. On the second day of the programme, I took a test at the hotel and discovered we were pregnant. Funnily enough, the night earlier, we’d had dinner with friends at a nice, quaint restaurant and discussed the possibility of moving to the Netherlands for good. Of course, we dropped the idea the next day after finding out we were going to have a baby,” says the Delhi-based entrepreneur.
The couple’s nature of work requires them to plan their travel months in advance. Though Vidushi was pregnant, they still had to travel to Belgium, Denmark and Finland for work.
“The best part was that as the weeks progressed and my pregnancy started to show, people all around at airports, washrooms, flights, restaurants, meetings and so on were very accommodating and helpful. In fact, travel didn’t really seem like a burden except late in my second trimester when I would tire out way sooner and hated walking long distances.” 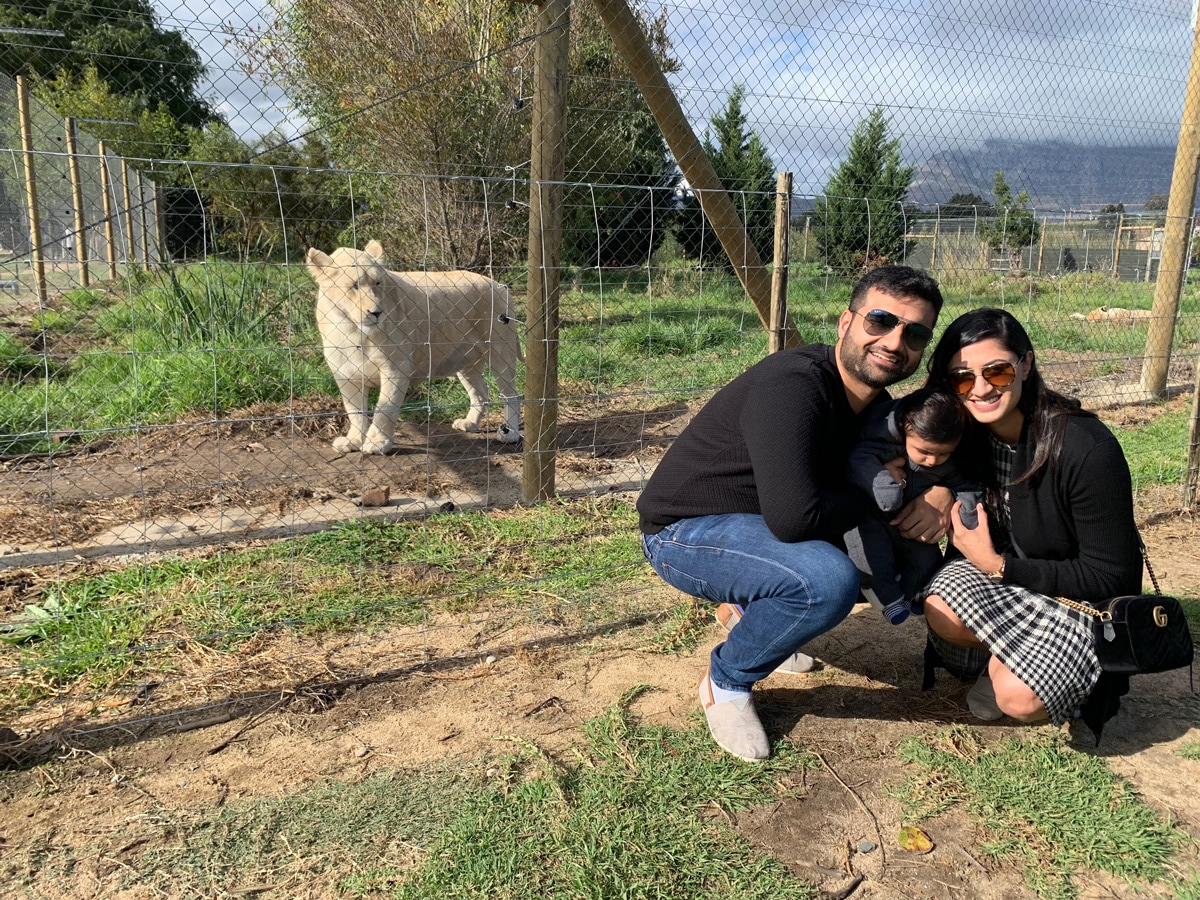 Vidushi, Apoorv and Meir
During pregnancy, the 30-year-old travelled to Europe, South Africa, Singapore, UAE and also did local trips to Bangalore and Jaipur. “Sometimes the staff at the security checks would ask me why I was travelling and when I said it was for work, they would give me this odd stare or even tell me to go home and take it easy,” she recalls.
“But, except for a couple of days in a month, I never felt the urge to just rest or chill. Work was my baby too and everything had started to pick pace. Every cell in my body kept pushing me to do more despite the physical inconveniences.”
The last flight Vidushi took during pregnancy was on the last day of her seventh month (the day after which one is legally not allowed to fly).
She feels as if she’s had two babies instead of one. “Luckily, my husband Apoorv and I are equal partners in parenting both babies. Our love for travelling and working in different parts of the world has taught us to be innately more resilient and hands-on,” she says.
Eight-month-old Meir has already travelled with his parents to six countries for work! “We have a new office in Delhi, and Meir also comes to office sometimes with us.”
PALLAVI JAIN, INSTALOCATE
Pallavi Jain is the co-founder of Instalocate, which instantly converts your flight delays into money. Launched in 2017, she and her husband have built an insurance-like product that uses the power of artificial intelligence to help hapless passengers who suffer due to flight delays. 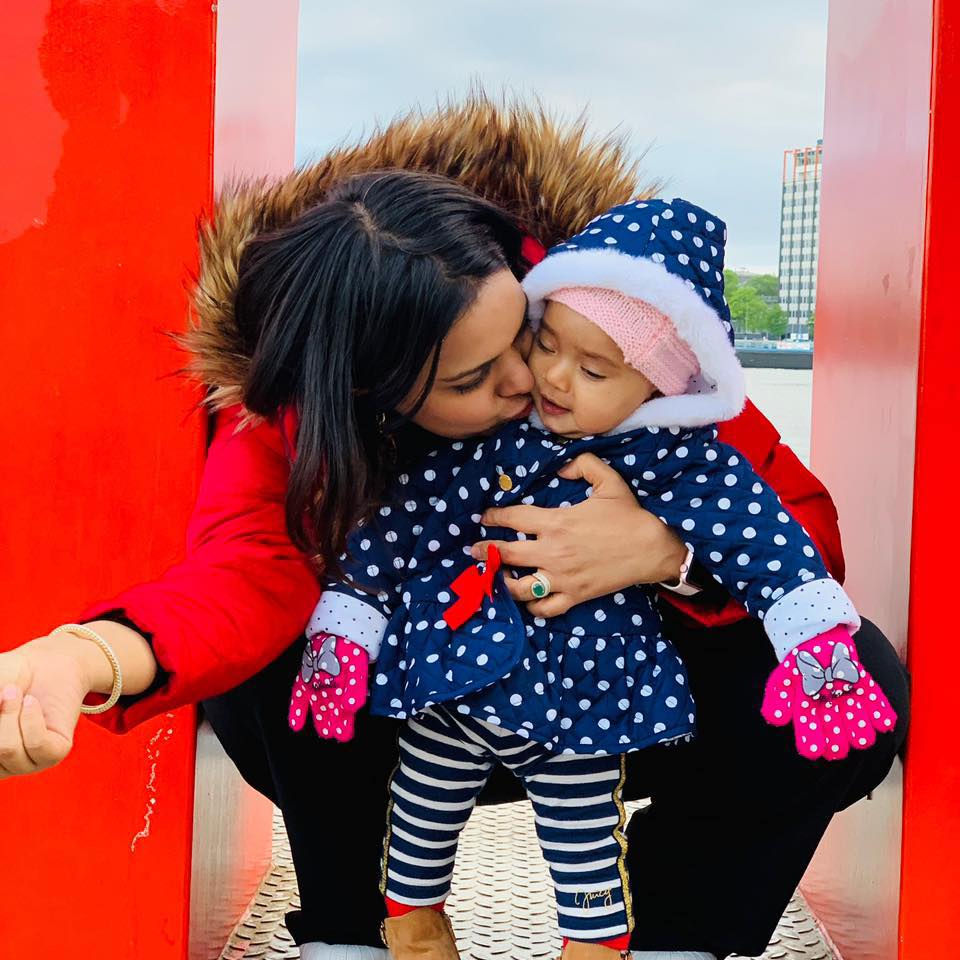 Pallavi and Amelia
“If something goes wrong, we will give you instant money without having to go through the complex process of claiming,” she says, adding that they recently helped team members of Dream11 get compensation of Rs 11 lakh from Lufthansa.
The entrepreneurial bug caught Pallavi early on in life. She launched her first business – a phone recharge service – while studying engineering at NIT Kurukshetra. After graduation, she joined her family business in cryogenic gases. She then worked with former President of India Dr. APJ Abdul Kalam on a concept science school.
In 2016, Pallavi took a course at Stanford University specialising in entrepreneurship. “Both my husband and I have been avid international travellers. And anything that can possibly go wrong with our travel has gone wrong – delayed flights, missed connections, lost baggage. Our own traumatic travel experiences led to the genesis of Instalocate,” she says. 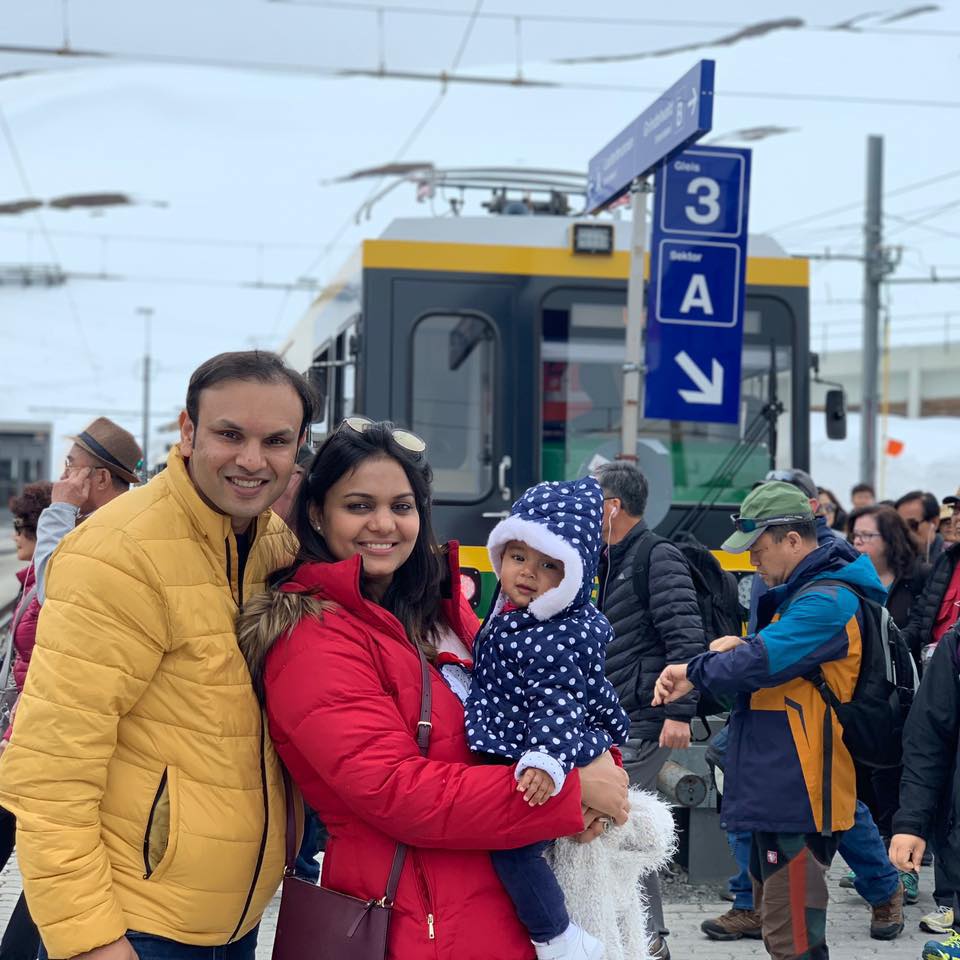 Pallavi with husband Ankur Jain and baby Amelia
The couple were still in the early stages of their company when Pallavi became pregnant with their daughter Amelia. “It was the most challenging phase of my life both mentally and physically. I was put on nine months of bed rest and was given a high dosage of progesterone to sustain the pregnancy. With all the complications related to the pregnancy and Instalocate still in its early stages, it was like a roller coaster ride,” she recalls.
They managed only with the help of a good support system. “We invested in technology and a good team from the beginning; that’s why I could handle both my babies at the same time,” smiles Pallavi.
She believes motherhood and running a startup both require lots of passion and patience. “It teaches you the value of time management. Being a mother has changed me as a person – it has made me more patient, tolerant and more organised. All this also helped me become a better leader at work. Running a startup, on the other hand, also helped me be a better mother!”
MOUSHUMI SHARMA, MAXCORP Moushumi with her husband Amit and son Lakshraaj
Moushumi Sharma launched MaxCorp in 2013 as a market research consultancy offering data collection, analysis and content services across various industries worldwide. She launched a second office in Toronto in 2018 to expand their research base.
Between those two launches, Moushumi also had a baby, in 2014.
Born and raised in various small towns in Assam, Moushumi had completed her Bachelor’s in computer applications from North Eastern Hill University, Shillong, and then moved to Delhi, where she did her Master’s.
A management professional with several years of experience working with clients in international markets, she decided to start her own venture when the company she was working with shut its operations in India, and clients began sending her small projects and assignments instead.
Soon, she learnt she was pregnant. “My company was a year old, and doctors had advised me bed rest, meaning I could not run around as planned. For the next eight months, I mostly operated out of my bed or bedroom, taking the minimum assignments possible. Once the baby arrived, it got more complicated and I kept working out of my home for another six months,” narrates the 38-year-old, who now shuttles between Toronto and Delhi.
When Lakshraaj was five months old, Moushumi tried getting out of the house for a few hours a day to work. “I did this for a couple of days to attend meetings, but after seeing my little one’s sad face when I left and picked him from the babysitter just broke my heart and I gave up!”
Instead, she continued working from home and went for meetings only when her husband Amit Makhija was available at home.
“I hired a few employees in 2015 and set up an office space, but I still worked from home and only visited office now and then for few hours,” she explains. “Those initial years were quite hectic. We were working for the Indian market as well as UK and North American market – which meant I had to work round-the-clock as the teams were aligned for all these time zones. My phones and laptops were on 24/7 – all this along with managing the baby.”
Even so, she thinks it would have all been harder if she had a fixed nine-to-five day job: “Here, even though I was on call 24 hours a day, I could arrange my work timings to match the baby’s and at the same time be close to the little one almost all the time.”
Gradually, she started going to office for about four hours a day, four evenings a week after her husband was back from work. “There were times when I would be on a client call and the baby would suddenly wake up and start wailing at the top of his voice,” she laughs.
Last year, she took her three-year-old along to Toronto to register her company there. “My baby and I braved the snow and ice, a new country, culture and climate, relying on public transport to explore ways of setting up a new branch. The quest is still on,” says Moushumi.
She adds: “There will always be adversities in life; we just have to make the best use of available resources and figure out a way. Motherhood is not easy nor is starting your own venture. Both are your babies, and need a lot of attention and selfless contribution.”
First published in eShe magazine
Check out our in-depth Market Coverage, Business News & get real-time Stock Market Updates on CNBC-TV18. Also, Watch our channels CNBC-TV18, CNBC Awaaz and CNBC Bajar Live on-the-go!