As many as 255 players from 31 countries take part in the event held at Peddem Sports Complex in Goa.

Ume. Ze. Yowza. Nduja. Hackerazzo. Omnishambles. On way to the third World English Speaking Players Association Championship (WESPAC), I was picking new words from the 2019 edition of Collins Official SCRABBLE dictionary. I knew none of them. Nduja, I thought would be a Russian doll - it is an Italian salumi. Yowza is another way of whooping in delight; Ze is a gender-neutral pronoun; Ume is not conjoined you&me, it is a fruit. A yellow fruit. My only word-solace was DadBod. I know that. The David Harbour kinda DadBod.

Never before had I felt so Scrabble-illiterate. As I stepped into Goa’s Peddem Sports Complex where 255 players from 31 countries were pouring over Scrabble boards, my word confidence shrunk to the lowest. In a corner, Scrabble World Champion Nigel Richards in a black tee and peppered beard was pitted against American Jesse Day in a Best of 7 knockout. On the beige board were Loll, Trike, Bop arranged in blue tiles. Just when my word-confidence was resurrecting, soft-spoken Sanjoy Gupta, Member, WESPAC Goa Organising Committee, threw in a bombshell. The third World English Speaking Players Association Championship was held in Goa.
“Caziques. Ever tried that word on the board?” No. No, was an obvious answer. “Caziques, plural of a type of oriole, can fetch 392 points and remains the world’s top-scoring single Scrabble move ever,” Gupta, an avid Scrabble player added. Maybe someday I could get Caziques on the board, but Oxyphenbutazone, theoretically, the highest-scoring Scrabble word worth a wild 1,458 points is near-impossible.
Inside the Peddem Sports Complex, words were being arranged and rearranged as Singaporean Michael Tang, Main WESPAC Tournament Director, ensured that all the clauses of the 37-page Rule Book was followed and the words used were necessarily one of the 276,000 (+ 2,862 new words added in 2019) words listed in the Collins Dictionary. Tall California-based Sam Kantimathi sat by his stack of non-reflective, 0.79 kilogramme turntable 3-part Scrabble boards that can be assembled in 6 seconds and the flawless Sam Timer that can register one-hundreth of a second. Nearly 255 players from 31 countries participated in WESPAC Goa.
With Richards and Day tied to 3:3 win each, the scramble for $10,000 first prize cheque was getting frenzied. Richards, the World English and French Scrabble champion, sat stolid while Day in white stared at the blue tiles on the bamboo rack. In the throng of word lovers was New Zealander John Foster, 80, the oldest player, and Thai Napat Vatjaraniratho, 15, the youngest player in the main WESPAC games. Few women (35 percent of player participants), fewer onlookers, no cheer squads. Amidst the jingle of tiles from the brocade bags, Nigerian Gitonga Nderitu notched the highest game score of 775 and the country held the Team Trophy. India settled for the second spot in the team category. 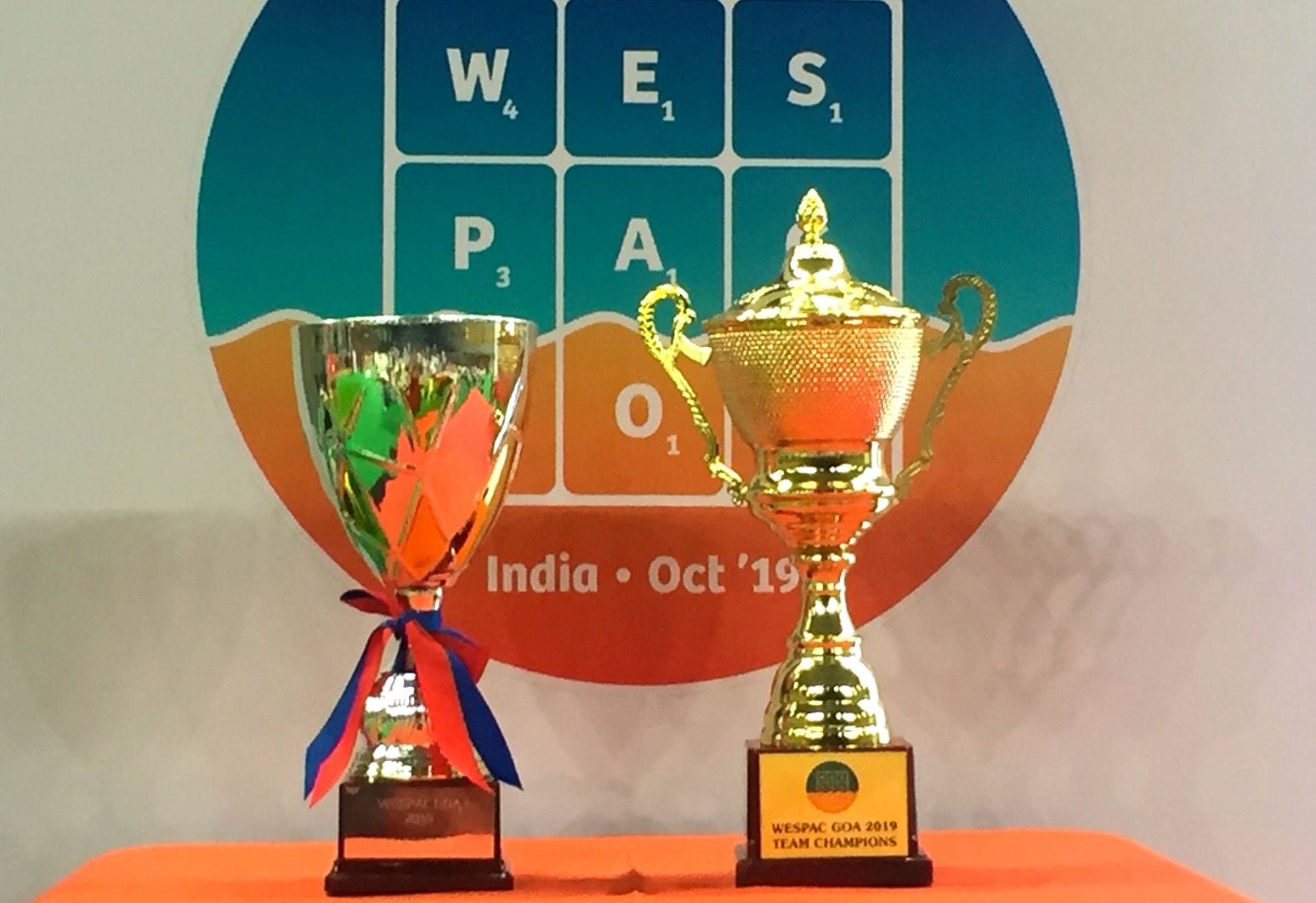 WESPAC trophies.
Richards and Day were still hunched over blue tiles. Virgas. Ascarid. Enate. Omertas. Blue tiles were turning into words and the score was ramping in favour of Richards, the New Zealander, the one who is often described as the Best Scrabble Player of All Time. When Day added Den in the right corner, the victory was Richards’ - 562 points versus Day’s 408 in the final game. New Zealander Nigel Richards was the winner of WESPAC Goa (Photo credit: Sanjoy Gupta).
I could form a Den against the new WESPAC winner but Caziques still haunts me. Will I ever tile that on my frayed wooden Scrabble board? If I did, it would be Yowza and I’d celebrate with Nduja and Ume. Nigeria won the WESPAC Team trophy, India stood second in the category (Photo credit: Manju Sood).
Good to know
During the Great Depression, a jobless architect named Alfred Mosher Butts invented a word game in 1933. Not many bought into Butts’ idea but it all changed 10 years later when New Yorker James Brunot bought the rights and changed the game -- he chose the pastel pink, baby-blue, indigo and bright red colour scheme, devised the 50-point bonus for using all seven tiles to make a word and gave it the name Scrabble. An abandoned school in Connecticut became the first Scrabble factory where Brunot manufactured 12 games an hour. Today, Scrabble is one of most popular board games with Hasbro owning the rights in the US and Mattel in every other country.
Scrabble Association of India has 350 members and there are nine active Scrabble Clubs in the country.
Scrabble is the official sport of Senegal. April 13 is World Scrabble Day.
Preeti Verma Lal is a Goa-based freelance writer/photographer.
Read her columns here.
Check out our in-depth Market Coverage, Business News & get real-time Stock Market Updates on CNBC-TV18. Also, Watch our channels CNBC-TV18, CNBC Awaaz and CNBC Bajar Live on-the-go!