We analysed the Twitter habits of Anand Mahindra and Harsh Goenka. This is what we found

We analysed the Twitter habits of Anand Mahindra and Harsh Goenka. This is what we found Both Mahindra, chairman of the conglomerate Mahindra Group, and Goenka, chairman of RPG Enterprise, are as different as chalk and cheese in their leadership styles.

They make jokes. They share funny videos. They highlight inspiring feats. Together, they have assembled nearly 9 million followers. Few corporate bosses in India have taken to Twitter like Harsh Goenka and Anand Mahindra.

Both Mahindra, chairman of the conglomerate Mahindra Group, and Goenka, chairman of RPG Enterprise, are as different as chalk and cheese in their leadership styles. By jabbing in a few words on social media frequently, Mahindra turns out to an effective brand ambassador, vital for a group that sells everything from tractors to financial advice. Goenka, a fifth generation entrepreneur from one of India’s best known business families, rarely uses key strokes to highlight his businesses, perhaps because they are largely B2B.
These findings are part of the insights of a CNBCTV18.com analysis of their personal Twitter accounts.
DAILY RHYTHM
While Mahindra gets into the full 'Twitter mode' at around 8 am on most days, Goenka becomes active on the social platform in the second half of the day. Mahindra’s tweets peak at 11 am, 1 pm and 6 pm while Goenka gets busy post 5 pm.

HOW MANY TWEETS A DAY?
Goenka takes the lead here with nearly double-digit tweets on most days. According to Account Analysis, he tweeted more than 40 times on Sunday, August 18. This fits in with his overall tweeting pattern as well. While Goenka tweets the most on weekends, Monday and Tuesday are his least active days on the platform.

For Mahindra, the story is a bit different. He rarely posts more than 10 tweets a day, with most days averaging at around four tweets. Mahindra has been on Twitter for over a decade and has tweeted more than 19,000 times. Goenka, too, has been tweeting since May of 2009 but has just under a shade of 12,000 tweets so far.

Goenka is clearly a late-bloomer on the social platform, but is catching up with Mahindra rather quickly.
WHICH DEVICE DO THEY USE?
The iPad and the iPhone are the common threads that tie both these corporate honchos. While Goenka uses the iPad more to tweet, Mahindra relies mostly on an iPhone, followed by an iPad.
WHAT DO THEY TWEET ABOUT?
This is where things diverge and how.
Over the past month, Goenka has replied to tweets directed at him 427 times, tweeted 116 times and retweeted others 52 times.
Mahindra on the other hand is more active with his thoughts. He has 'quote tweeted' 300 times, written original tweets 181 times and retweeted 110 times. His reply count to others has been an abysmally low at 9, according to Account Analysis.
WHAT DO THEY RETWEET?
Mahindra uses the platform to further communication around his company more while Goenka frequently indulges in softer aspects of life and nutty banter. 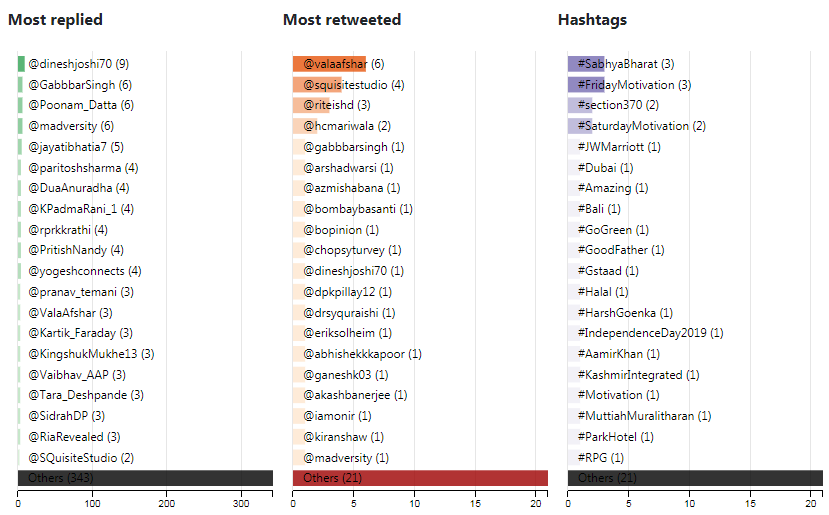 Goenka engages a wide variety of people on Twitter, including heads of other companies like Kiran Majumdar Shaw, Harsh Mariwala and a few Bollywood actors. 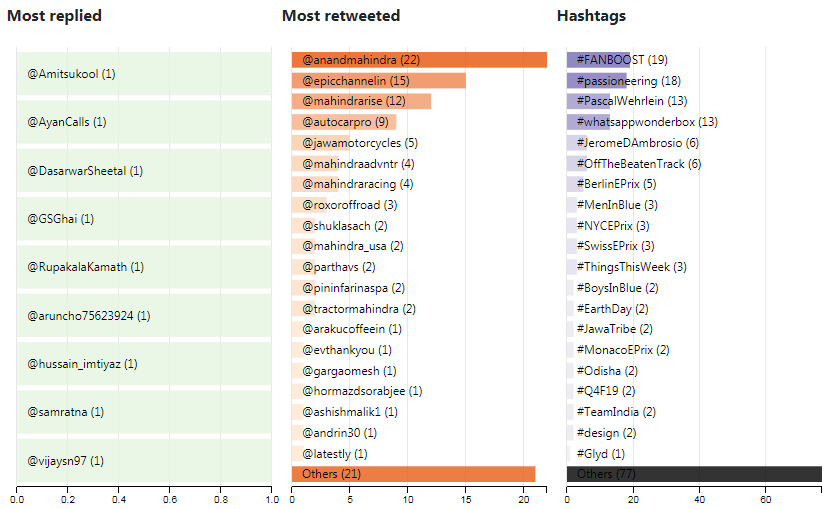 Mahindra is mostly seen retweeting about his own companies. Mahindra Jawa motorcycles, Mahindra Thar and Mahindra Blues get the pride of place. Even the hashtags used by Mahindra revolve around his company whereas Goenka uses uses hashtags trending on Twitter to communicate his views.
Check out our in-depth Market Coverage, Business News & get real-time Stock Market Updates on CNBC-TV18. Also, Watch our channels CNBC-TV18, CNBC Awaaz and CNBC Bajar Live on-the-go!