In the city with 800 bridges and 8,000 landmarks, my feet tiptoed unconsciously towards unprecedented magnificence and unmatched wealth of the Romanovs who ruled Russia for 300 years.

Walking the length of a 325-meter long palace once gilded with 200 pounds of gold can be quite ho-hum. Walking the sopping palace ground alone where once walked the world’s richest Czar can be grossly dreary. That rainy day, however, in St Petersburg’s Catherine Palace, I was a little torn about my walk-the-palace companion. Between a rich Romanov Czar with gimlet eyes and a tidy beard, and a mystic faith healer with such flaming eyes that he could sear one with a long gaze. Czar Nicholas II, the richest man on earth (at the current price, his wealth would have been $300 billion) and Grigori Rasputin, the most controversial man in Russian history. The famous Faberge eggs. (Photo credit: Preeti Verma Lal)
In the city with 800 bridges and 8,000 landmarks, my mind was tangled in these two dead men but my feet tiptoed unconsciously towards unprecedented magnificence and unmatched wealth of the Romanovs who ruled Russia for 300 years. The Catherine Palace, now with its gold scraped and wearing a staid robin’s egg blue, borrows its name from its maker - Catherine, the Great. The Empress described it as ‘whipped cream’ architecture. I saw no cream. Instead, there was gold everywhere. Cupolas gilded in gold. Chairs, tables and picture frames. Golden carvings, chandeliers, angel figurines. Everything in gold. The Catherine Palace near St Petersburg. (Photo credit: Preeti Verma Lal)
Even a 56 feet wide and over 154 feet long gold Ballroom. As if the gold was not ostentatious enough, the Romanovs had an Amber Room, a wall panelled with precious amber currently valued at roughly $400 million. The Room was vandalised during World War II but has been recreated sedulously. 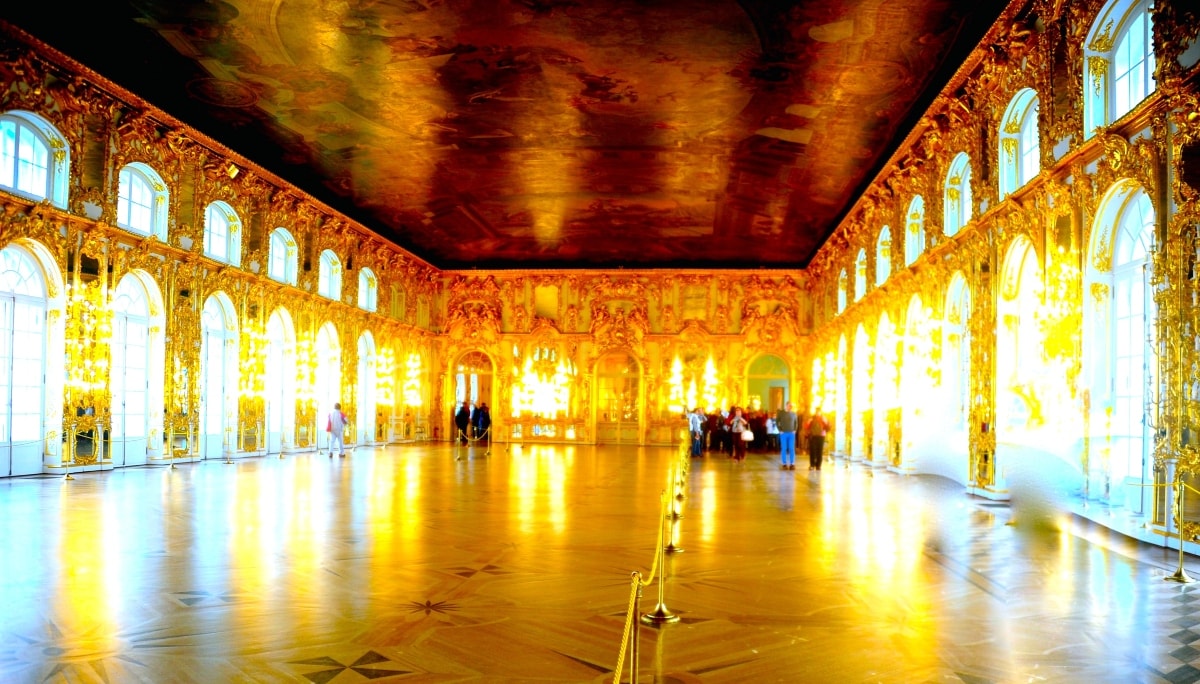 A gold Ballroom in the Catherine Palace. (Photo credit: Preeti Verma Lal)
The Romanovs were not counting palaces. There were too many of them. The Peterhof, with gold fountains; the Winter Palace; the Catherine Palace, and the relatively modest Alexander Palace. Nicholas II, the last Czar, did not count pennies, either. He had a 401 ft long yacht, the longest in the world; a royal train as ornate as the palaces; spent lavishly on military uniforms; French couturiers designed clothes for his wife and children; their hats com-ing from top London milliners and baskets of flowers brought in every day from France. 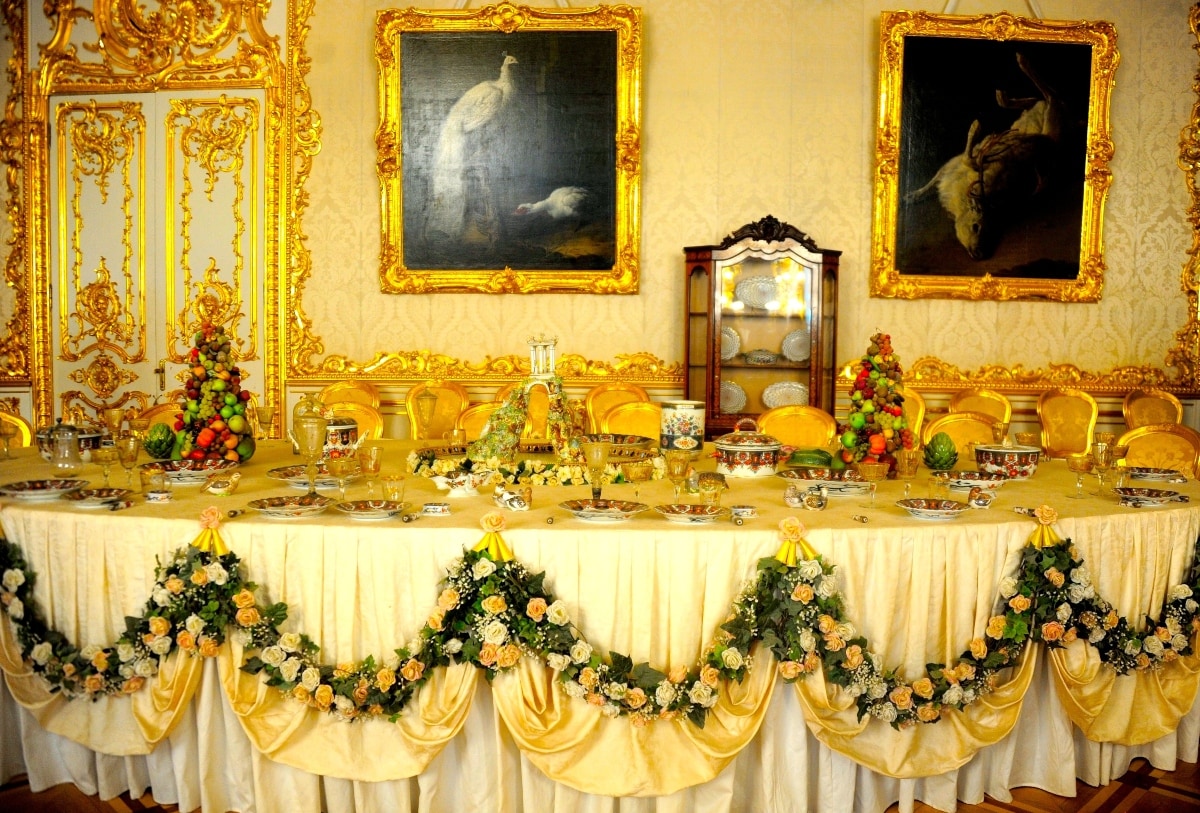 An ornate dining room of the Romanovs. (Photo credit: Preeti Verma Lal)
Nowhere is the wealth of the Romanovs more evident than in The Hermitage, one of the world’s largest museums, that houses the fabled Faberge eggs. The Romanovs ordered one each year, each currently valued at $24 million each. Nearly 50 Faberge Easter eggs were created, of which the most famous is the one Tsar Nicholas gave to his mother in 1913 - made of gold and platinum, this Faberge was studded with 1,660 diamonds on the outside and another 1,378 in a little basket hidden inside. A golden peacock now on display at The Hermitage. (Photo credit: Preeti Verma Lal)
In The Hermitage, I stood in front of a gigantic peacock clock, another exaggerated showpiece of the Romanovs. The clock was ticking but my mind was stuck at the chiming of 1.30 am on July 17, 1918. That night, from a mansion in Ekaterinburg (800 miles east of Moscow), the last Czar of Russia along with his wife and five children were woken up and taken to a dingy room. Death was delivered with gunshots but for the princesses, wealth came between them and quick death. Some of the fabled Romanov diamonds and precious stones were sewn into their underclothing and led to their slow agonising deaths because bullets ricocheted off their diamonds. A diamond can only fend off a bullet. It cannot vanquish Death. That night of July 17, 1918, was the last one for the Romanovs. The last Czar of Russia. The end of the rich Romanovs. The golden chapel in St Petersburg. (Photo credit: Preeti Verma Lal)
Good to know:
The Last Czar, a six-episode docudrama on the last Czar of Russia, is currently streaming on Netflix.