Virtual Reality check for The Metamorphosis

After a century of such vivid transformations as a Manga comic book, two operas, ten movies, one graphic novel and two video games, Franz Kafka’s The Metamorphosis has a new avatar.

The algorithm-age adaptation of one of the most admired stories of world literature, not surprisingly, is a Virtual Reality (VR) installation. After opening first in Kafka's home city, Prague in the Czech Republic last year, the VR installation is on a world tour, offering a curious insight into the famous writer and his work. VRwandlung, a Virtual Reality installation based on Franz Kafka's The Metamorphosis, was shown in New Delhi this week.

“It is a new medium, like the radio, television, photography or cinema,” says Mika Johnson, the Finnish-American multimedia artist who has conceived and directed VRwandlung, the four-minute VR rendering of The Metamorphosis. Interestingly, the VR installation's title too is an adaptation of the novella's original German title, Die Verwandlung.

The installation invites Kafka fans to his world, which, in the case of The Metamorphosis, is his room in Prague. It is a simple entry into the home of Gregor Samsa, a travelling salesman who wakes up one morning to find himself transformed into a giant bug. The tour of Samsa's room begins by stepping into a pair of shoes and wearing a pair of gloves -- both censors for the VR -- and donning a headgear. 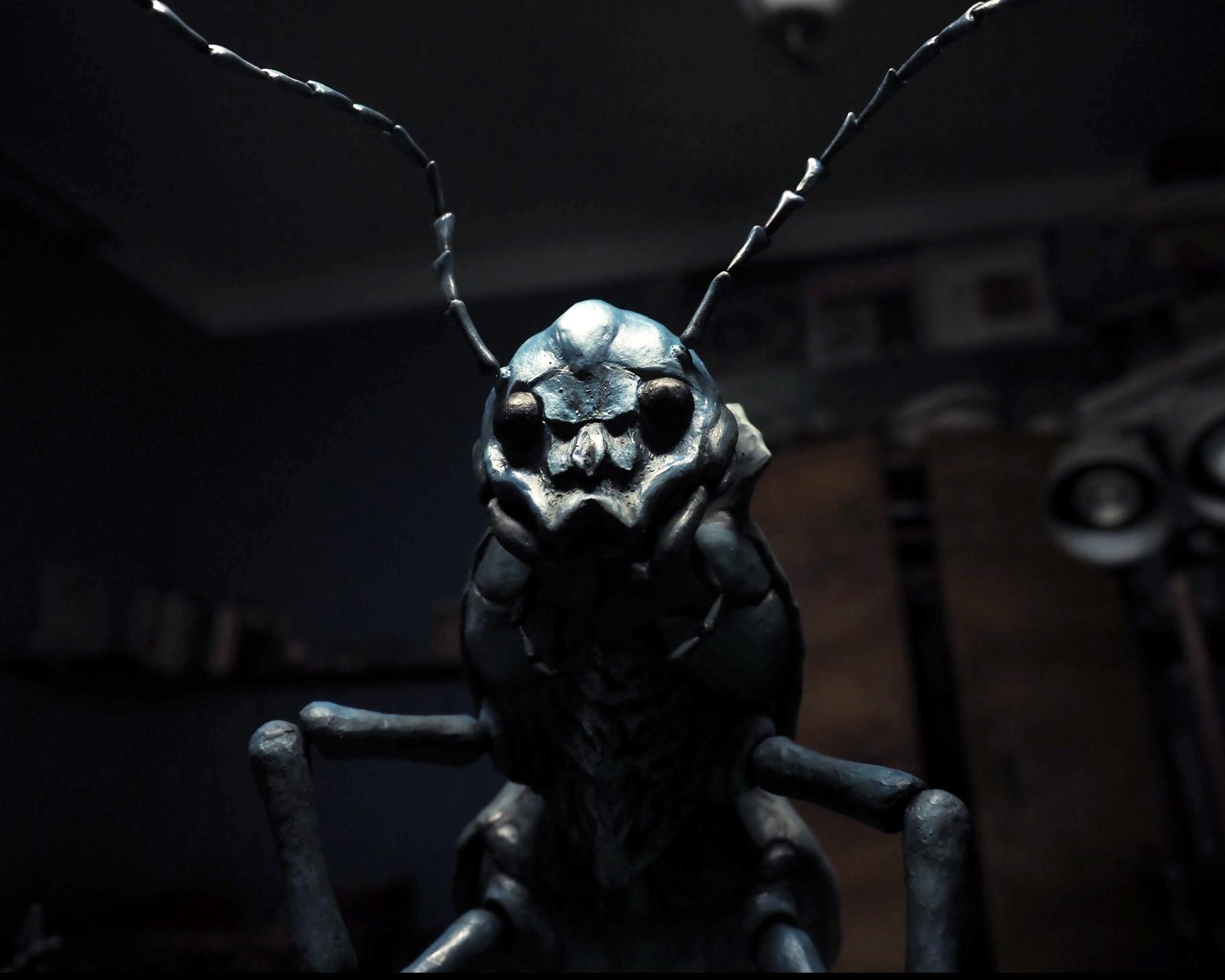 The 3D model for the giant bug in The Metamorphosis was created in a countryside house in the Czech Republic.

Kafka's 1915 novella of Samsa and the giant bug becomes a four-minute sojourn in VRwandlung at the Max Mueller Bhavan in New Delhi earlier this week. There are dozens of objects linked to Kafka's own room in the installation, among them his writing desk and bed. The high point of the installation is a mirror, an improvisation of Kafka's room that reflects the image of the viewer. As a giant bug, of course. 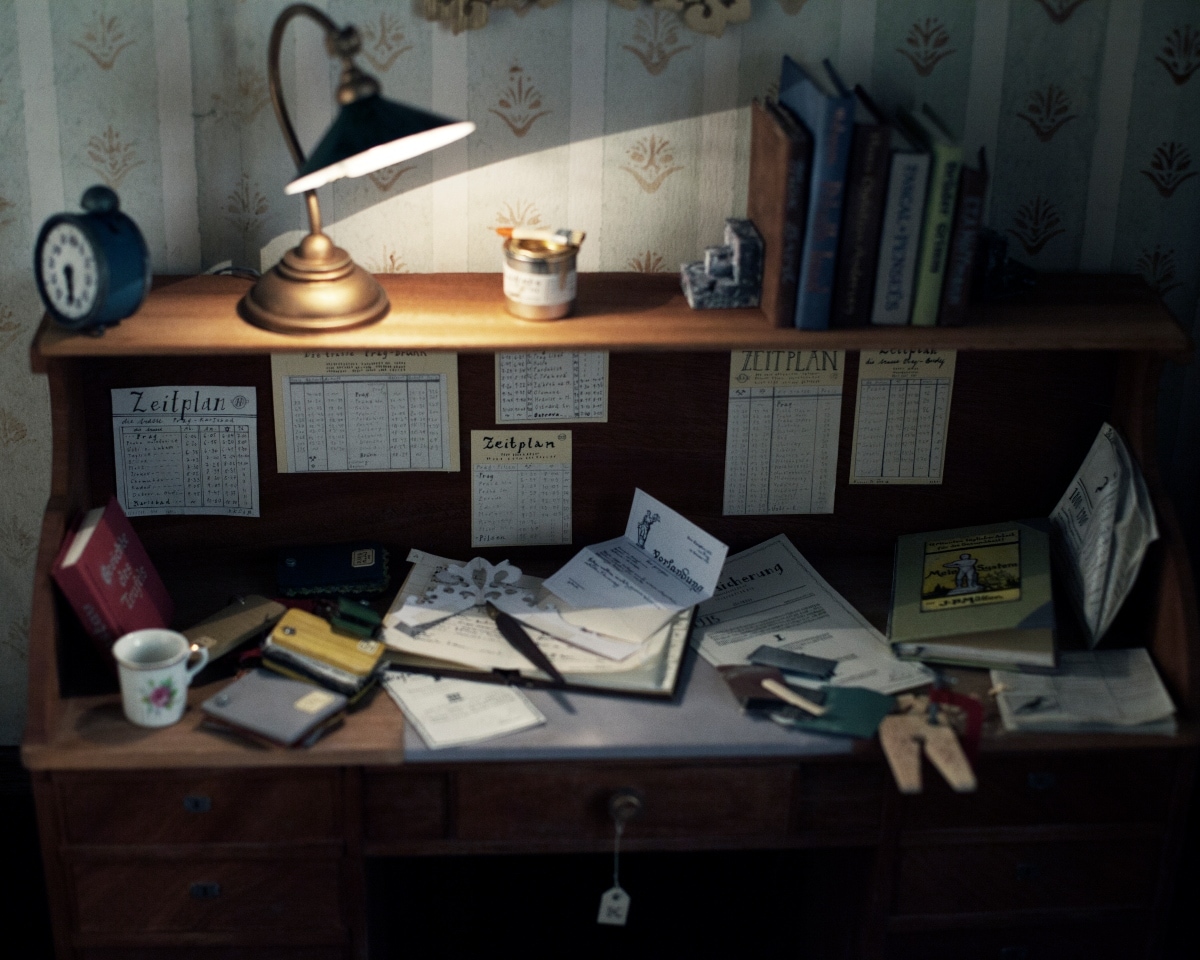 The writing desk of Kafka in his Prague room has as many as 70 objects in the VR installation.

"The VR installation becomes a shrine to Kafka himself," says Johnson, who assembled a team of animators, artists and actors to create VRwandlung. Supported by Goethe Institute, VRwandlung has travelled to 36 cities, including Athens, Soul, Singapore, Tokyo and New Delhi, after its premiere at the Goethe Institute, Prague in January last year. It was an arduous journey for Johnson and his team to turn the novella into an installation. Johnson, who divides his time between Munich and Prague, was clear from the beginning that the Czech animation presented the biggest opportunity to create Kafka in VR. "The Czech-style animation has a grammar like a film of Andrie Tarkovsky," explains Johnson. "It was the most ideal."

Johnson then met two Czech animators, visual artists Vojtech Kiss and Ondřej Slavík, and went through every single detail of the project. They assembled a 30-member team that travelled to the Czech countryside to begin a rigorous seven-week artistic reconstruction of The Metamorphosis. The important creation was going to be the giant bug.

But there were many more details relevant to Kafka. Like Kafka's room in his Prague home. "Even the writing desk in his room has 70 objects," exclaims Johnson. The Kafka family changed at least four houses in Prague, but its home in the Zum Schiff building, at Niklasstrasse 36, where they lived between June 1907 and November 1913, became the base for the recreation of the room.

The inspiration for the room was the drawing of the floor plan of Kafka's family's home by Hartmut Binder, the Kafka specialist and author of the illustrated book, Kafka's World. "Because Gregor Samsa’s bedroom was based on Kafka's actual room, where he penned the first draft, the inspiration for the first sketch of Samsa's room, in VR, was Binder’s drawing," says Johnson. A drawing of the model for the giant bug created by Czech visual artists for the Virtual Reality installation.

Visual artists Kiss and Slavík first created conceptual images in miniature for objects in Samsa's room, which were later scanned and rendered in 3D. The room, also created by Kiss and Slavík in miniature and entirely hand-made, included an alarm clock, a table lamp, shelves, books, a set of drawers, a snow globe, a desk littered with various items and personal papers. Among the books were Gimm's Fairy Tales, a Hans Christian Anderson book and another of Kafka's friend and publisher Max Brod.

"It was a bit like Alice in Wonderland," says Johnson about the making of The Metamorphosis VR, which is in German, Czech and English. "Virtual Reality has the feeling of transformation," he adds while insisting that it is an adaptation, "not a game". "VRwandlung challenges the limits and opportunities offered by new technology," says Max Mueller Bhavan's regional director Berthold Franke, who was head of Goethe Institute, Prague, before he arrived in New Delhi. VR installations like The Metamorphosis VR are adding a new dimension to art across the world. India's first VR documentary, Right to Pray by Khushboo Ranka on the protests by women to demand entry into the Trimbakeshwar temple in Nashik, was one of the five VR docus premiered at the Toronto International Film Festival in 2016. In 2017, Mexican filmmaker Alejandro G. Inarritu created ripples in the cinema world by bringing a VR installation to the Cannes film festival. Titled Carne y Arena, it dealt with the refugee crisis in the world and won Inarritu a special Oscar, the first for Virtual Reality, with the Academy saying it "opened for us new doors of cinematic perception".

Faizal Khan is a New Delhi-based writer on art and culture and their impact on society.