Urbanisation and climate change sting bees. What can cities do for them?

Updated : February 27, 2020 06:22 AM IST
Bees play a crucial role in pollination, which not only ensures food production and security but also helps in the growth of plants and trees that could protect cities from climate change impacts.
Urbanisation, hostile treatment towards bees and climate change threaten the insects.
Companies such as Bee Basket are promoting ways for urban areas to become bee-friendly through sustainable honey harvesting practices and honeycomb rehabilitation initiatives.

"Everyone wants honey. But no one wants the bees near them," says 34-year-old Pune city resident Amit Godse of Bee Basket, who runs a business extricating beehives from neighbourhoods that don’t like them. Godse then relocates the beehives to wooded areas or farmlands bordering the city or sends them to beekeepers.

“We produce honey from wild and domesticated bees. We harvest two-thirds of the honey and leave the rest for the bees. Some wild honey collectors drain the entire hive and even destroy it in the process,” explains Godse.

Honey bees collect the nectar of flowers and store it in wax combs as a food source to feed immature larvae and adults during winter.

In addition, bees help propagate biodiversity in cities and forests. Nearly 90% of wild flowering plants depend on animal pollinators for seed production. For instance, Cassia fistula or the Indian laburnum, a native tree that paints many cities yellow at the onset of summer, is pollinated by several species of carpenter bees. But the abundance and diversity of wild pollinators across the world are falling due to human activities such as intensive agriculture, pesticide use, and climate change.

Bees are facing the consequences of urbanization too.

Rock bees, the most commonly found species in Indian cities, nest in buildings and arches instead of tall trees. And that brings the possibility of conflict with humans.

Godse believes that bees don’t bother humans unless provoked. He says that fear of bees due to lack of knowledge about them is the biggest threat to the species. “People spray pesticides on hives or burn them. They think destroying it is the end of the issue. But losing bees is actually the beginning of it.”

S Basavarajappa, associate professor and part of the apidologie lab that studies honey bees, their behavior, and ecology at the University of Mysore in Karnataka, India says, “Glass buildings and packed concrete roads in cities trap the heat and increase the temperature, altering its local climate. Bees can’t handle the heat beyond a point.” He has been studying the rock bee colonies in Mysore, a city in south India, for many years and observed a 2% decline in colonies every year though reasons are yet to be identified. Globally, various studies have linked climate change to potential population decline in bees. Another study describes how a mismatch between flowering time due to global warming and bees’ activity led to fitness losses in the insect.

“Bees cannot cope if it is too hot. If it is too cold, they will be strained to produce more honey. Untimely rains affect the flowering and nectar availability,” said Rao.

But urban centers can do their bit to keep the buzz alive. A 2019 study across four British cities found that urban centers are a haven for pollinators as compared to neighbouring farmlands, and a study in Bengaluru suggests that neighbourhood parks in cities support biodiversity, including insects.

“People can plant native trees in their localities, and keep plants of local fruits and vegetables and in their windows and balconies,” suggests Rao. She advises people to get trained in beekeeping from the state-run institutes or other groups to learn more about them.

Godse promotes the idea of urban beekeeping and to see native bees as pets. He believes that even in dense cities, houses with a balcony can keep bee boxes with stingless bees after they get trained. “The bees will collect nectar from trees within a two-three kilometers radius and return to your house. You’ll have a hobby, and they’ll help in pollination.” Bee Basket has helped 35 houses in Pune to start beekeeping. 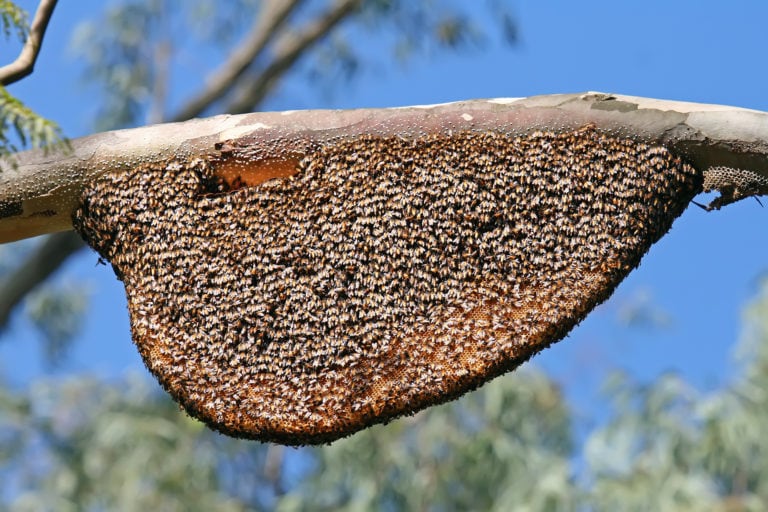 A colony of Apis dorsata or the rock bee, a native honey bee found in India. Photo by Muhammad Mahdi Karim/Wikimedia Commons.

Basavarajappa says existing green spaces and trees need to be preserved, and emphasizes that awareness programs amongst the local youth and in residential areas are critical to sensitize them towards bees and adjust their common perception from stinging pests to helpful allies.