Updated : September 06, 2019 03:50 PM IST
Sapna began working at a popular hair salon in Mumbai and even became a Bollywood stylist.
More importantly, she has recently released Sindhustan, a documentary that traces her Sindhi roots, which has been doing the rounds at international film festivals.

Sapna Moti Bhavnani had always been daddy’s little girl, with the same deep-set eyes and furrowed forehead, from the time she played havoc as a teenager, chloroforming him so that she could sneak out with the boys in the ninth grade, to the time she rode a motorcycle to school, living life her way, following her father’s footsteps, both rebels without a cause.

Sapna’s father passed away way too early. But the 48-year-old celebrity hairstylist, actor, designer and filmmaker is still as rebellious as ever. Now with a cause.

Her life reads like a series of make-believe events. As a teen, Sapna was shipped off to the US by her young desperate widow mother, who hoped that spending time with her aunt there would change Sapna’s attitude. She enrolled in Barat College near Chicago to study marketing. 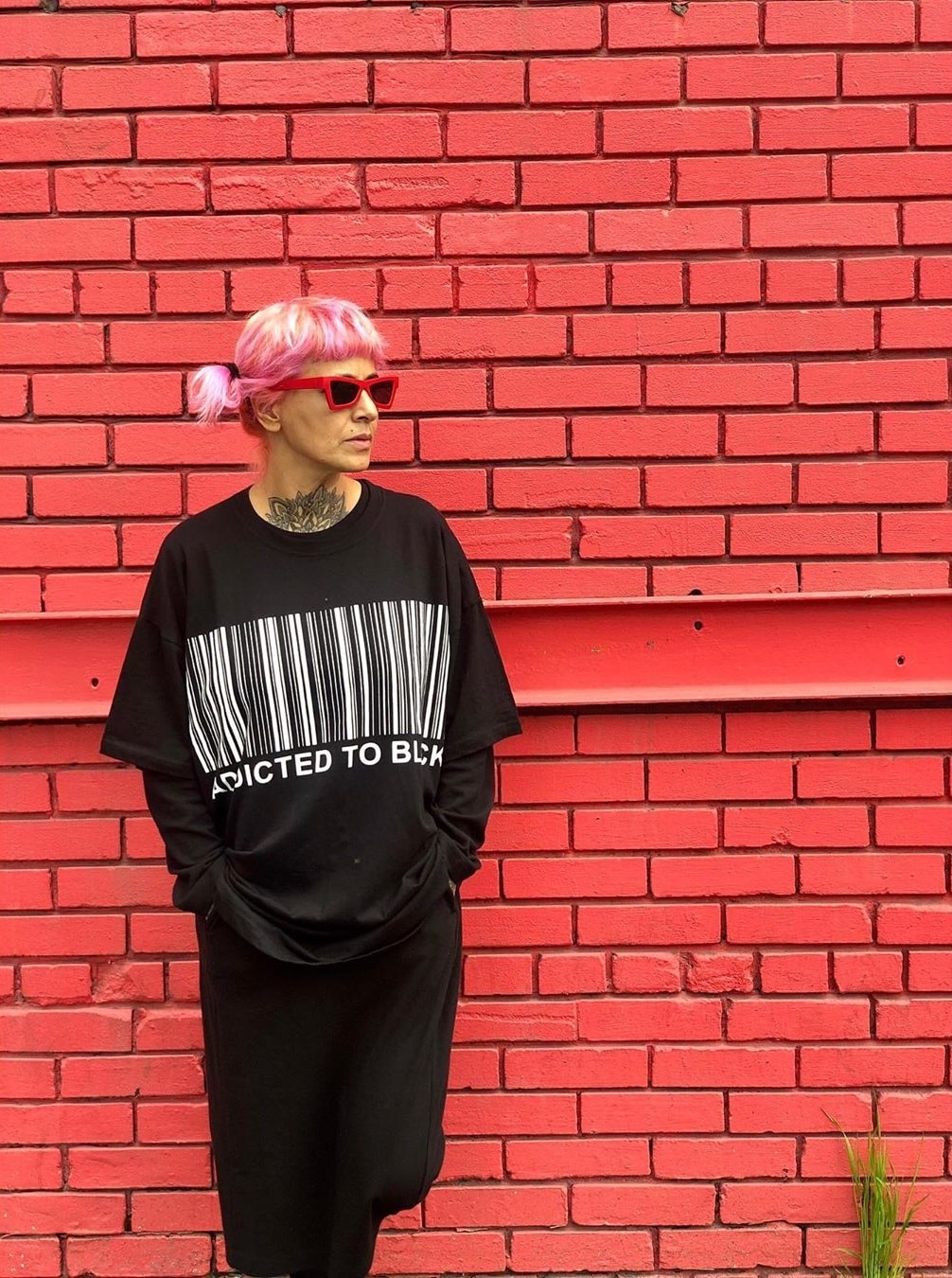 Sapna in Toronto, Canada, shot by her partner Kabir.

"But an artist does not need to go to school, a writer cannot be taught how to write nor an actor to perform,” the feisty Sapna opines. “One goes to school just to hone the craft that you are already born with.” In fact, she believes formal education usually kills the rawness of the craft, making one too precise for true art.

After bartending and waitressing, Sapna found her niches in the Los Angeles film industry, making music videos and designing plaques to commemorate gold and platinum record sales, and living it up with a house in the hills, a Cadillac and an Elvis-lookalike boyfriend. “At 30, I actually moved back to India (in 2002) after 14 years of life in the US, and gave up my Green Card,” Sapna narrates. “From making $8,000 a month I settled for making Rs 5,000 a month.” Sapna shot by Bikramjit Bose for her photo series that questions wedding rituals.

Sapna began working at a popular hair salon in Mumbai and even became a Bollywood stylist. Within two years, she started her own salon, Mad-O-Wot, and married an old flame. But when the marriage became violent, she left. More marriages ensued, as did diversification and glory in her career.

Sapna began working with celebrity clients in fields ranging from Bollywood to sport and business. She launched a production company to promote creative talent, make music videos, commercials and short films. She even designed a collection with fashion designer Sukriti Grover called ‘So Fake’ and presented it at Lakme Fashion Week. 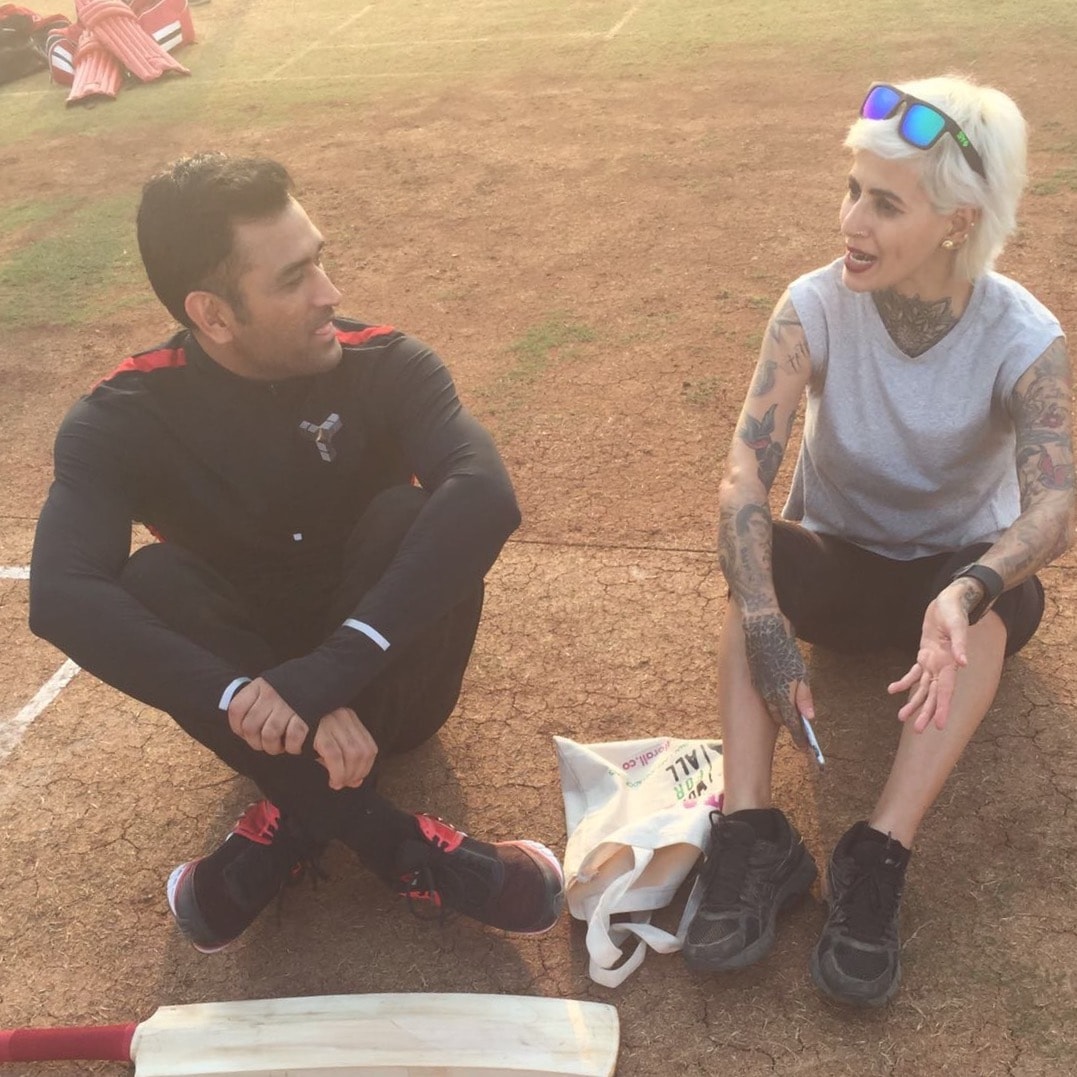 Sapna on the field with her famous client, MS Dhoni.

Then the Delhi gang-rape of 2012 triggered off a fire in her that refused to die.

In 2013, Sapna acted in Nirbhaya, a play in which she spoke up about a deep, dark secret she had held inside her for nearly two decades: that she had been gang-raped in America as a 24-year-old while returning from a party late at night. “I hadn’t acknowledged it even to myself so it was never a part of my sharing even in my relationships. For me, it just didn’t exist. The human mind is very powerful and the incident was locked in my Pandora’s box for 20 years,” says Sapna.

Raw and painful, the play premiered in the largest arts festival in the world and won the Edinburgh Fringe Award. Sapna kept up the outspokenness, and posed nude for a PETA ad that proclaimed, “Ink not mink – be comfortable in your own skin and let them keep theirs.” She also participated in the Indian reality TV show Bigg Boss Season 6, where she had a fallout with the celebrity host, Salman Khan.

“Salman is not god, neither am I,” she quips, adding that she was glad to be there for over 13 weeks and to be able to send out an empowerment message out to Indian women: “It’s okay to be 42 years old and not wear a sari, not be married, not have traditional long hair, and not have children. You can be whoever you want to be.” Sapna isn’t one to follow stereotypes, and she believes women hold themselves back far too much. “I bet you think from the way I look – tattooed, coloured hair, motorcycle boots – that I would never get married. But I did and I’ve been married three times. Yes, I went through domestic abuse in one but I chose to leave immediately. Fearlessness is inbuilt. But it also exists in one’s childhood. Parents have to be very careful from birth to age five when they create fear in a child’s mind because later one is tainted by everybody else’s opinion of how one should be,” she says.

Today, Sapna’s hairstyling studio and production house are successful on their own feet – though she still personally styles the hair of Indian cricketing icon MS Dhoni and Bollywood actor John Abraham. She also devotes herself to other passions, such as her PurrOm Healing Centre where nature, cats and puppies are the real healers, and her adopted village Palegaon in Maharashtra, which she supports through crowd-funding on Facebook.

More importantly, she has recently released Sindhustan, a documentary that traces her Sindhi roots, which has been doing the rounds at international film festivals. It premiered at New York Indian Film Festival where it won Best Documentary Feature. It was also awarded at prestigious film festivals such as AIFF, IFF Stuttgart and MISAFF this year. “I had been researching the pain that my ancestors must have felt leaving their land. That’s when I came upon the idea of making this documentary,” she explains. 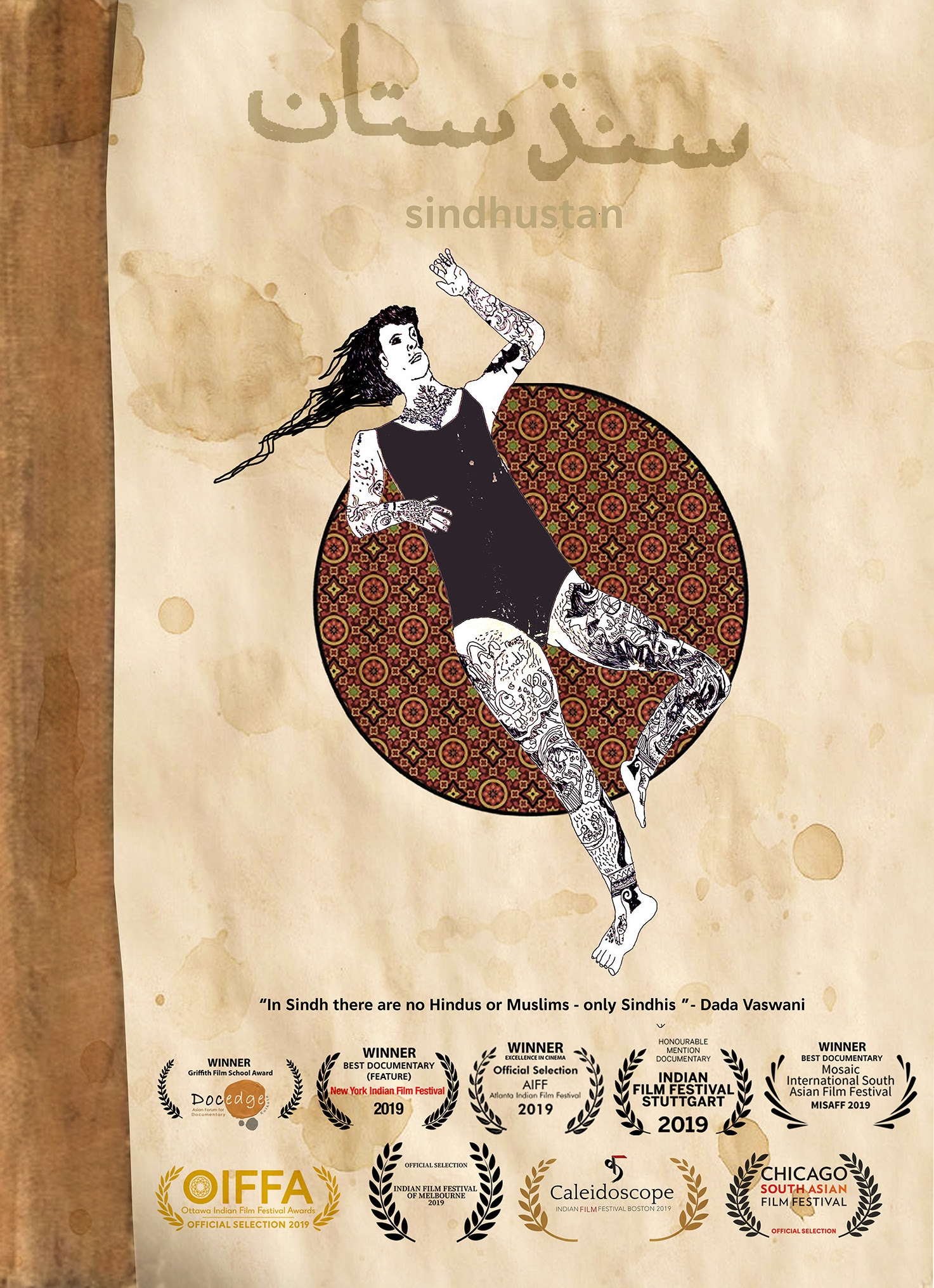 The poster of Sindhustan designed by Kabir Singh Chowdhry.

“It took me two years to decide how to tell the story and how I wanted to project it. Being a visual person, I decided to make the documentary finally with the story of the largest migration of culture in history by inking it on my legs. Interviews followed and most of the people in my film are in their 90s and so, like my stories, the people are also dying. It is very important that this story is told.”

While her legs gradually covered up in tattoos representing the land and migration of the Sindhis, Sapna shot interviews of people in Mumbai and Pune, visited the Wagah border, and travelled to Nepal to coordinate with a photographer who travelled to Sindh on her behalf as she didn’t get a visa.

“All I am thinking about these days is how I am going to get to Pakistan to complete the documentary of my journey; only then the story will be complete,” she says, cheered on by the Twitter hashtag #GrantVisatoSapna2VisitSindh that has been trending in Pakistan to get her to the other side of the border.

Bold and spirited, Sapna refuses to be melancholic about the wounds of her past and doesn’t bother with a conceptual perception of happiness. “I don’t even know what healing means. My yoga teacher Siddharth Bangera says being healthy does not mean the absence of disease, but instead living with it successfully. Healing does not mean I’m not hurting. These words are just Instagram hashtags, they have no real meaning,” she dismisses.

Instead, she takes to Instagram to post brilliantly directed promo videos of Mad-O-Wot or pictures with her current partner, ethnographer Kabir Singh Chowdhry, celebrating their one year of togetherness. “La vie en rose,” says the caption. The rebel follows her own rules.