Tsunamika, the dolls that give voice to the ocean, livelihood to women

Tsunamika, the dolls that give voice to the ocean, livelihood to women Uma Prajapati, 50, an entrepreneur-cum-social activist, who built the fashion garment company Upasana Design Studio in Auroville, now plans to carry out her business to sustain the future of the planet.

She gave birth to Tsunamika, the doll that brought hope to hundreds of women who had lost everything in their life to the devastating 2004 tsunami that hit the southern India coast. Fifteen years down the line, she, again through Tsunamika is giving hope to the same ocean that once took away much from many.

Uma Prajapati, 50, an entrepreneur-cum-social activist, who built the fashion garment company Upasana Design Studio in Auroville, now plans to carry out her business to sustain the future of the planet.
For a woman, who had to once play hard to convince her parents from Gaya, Bihar that her arena was larger than within the four-walls they gave her, Prajapati's mission is now to protect the environment and promote sustainable living for those dependent on it. .
Her fashion garments only uses khadi, organic cotton and handloom. She has used her design skills to come up with a compact foldable shopping bag as an environment-friendly solution for plastic carry bags. She has also started projects like Paruthi working with farmers in Tamil Nadu to grow organic cotton and Varanasi weavers.
For Prajapati, born and brought up in a small town in Bihar, the Auroville connection happened after she attended an exhibition in Pragati Maidan in Delhi. "Auroville had a stall at the exhibition. The place interested me and I wrote to them expressing my wish to make a visit. I got a positive response," Prajapati told IANS from Auroville, the universal township near Puducherry set up to promote human unity. 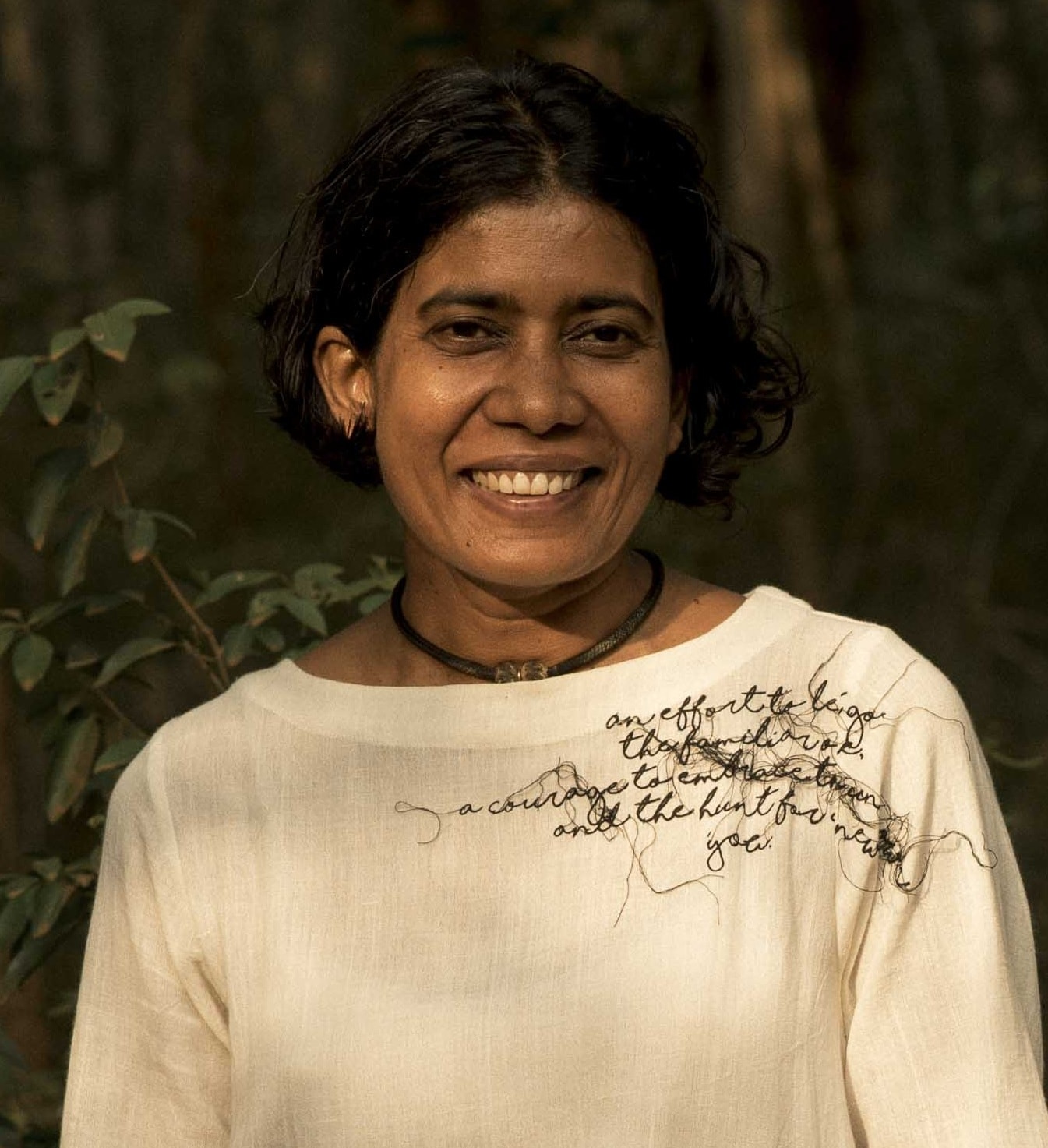 Uma Prajapati, 50, an entrepreneur-cum-social activist, who built the fashion garment company Upasana Design Studio in Auroville, now plans to carry out her business to sustain the future of the planet.
Then just into the first few months in Delhi after she left behind a life most secluded and sheltered, the economics student from a Gaya college, who aspired to be a scholar, or writer, or painter, it was a huge leap.
Taking two weeks off from office, she came down to Auroville. "I realised that Auroville was the place for me where I could be a designer and also a spiritual seeker. It was a radical place for me and I settled down here in 1997," she said.
Be that as it may, Prajapati upon arrival in Auroville joined a small garment unit. Very soon with a small sum of Rs 2,000 she turned entrepreneur floating Upasana, which broke even in six months time.
Recalling her first social project -- Tsunamika -- Prajapati said life was chugging along well with her garment business that started in 1997. Soon, she was shipping out about 40 percent of the production.
Then a tsunami wave hit the southern coast in 2004 turning lives upside down. Upasana turned from pure garment business outfit to a socially-conscious venture.
"When I visited the tsunami-affected fishing villages in Puducherry, I saw the women staring emptily and silent. It suddenly struck me to ask them whether they would like to make dolls. My idea was to make them to focus on something else and ignite the fire of hope in their minds."
When the fisherwomen agreed, Prajapati brought loads of garment waste from Upasana and taught them how to make tiny dolls - these were named 'Tsunamika'.
While the women made the dolls, the mood was heavy and silence prevailed until one woman laughed. "Suddenly I heard laughter from one woman. She pulled the leg of her neighbour saying the doll she had made looked stupid, just like the maker. It was a small comment but the mood of the group changed immediately and there was laughter after several days," Prajapati said.
She took the doll idea to several fishing villages in Puducherry and soon had thousands of dolls on hand giving rise to the concept of a 'gift economy'.
The Tsunamika dolls are not sold but given as gifts. The recipient of the gift or others can make a donation as per their capacity.
Donations received were used for making more dolls and payments made to the fisherwomen. "After a long time, there came a day when the thought of a donation didn't occur, while gifting the dolls. The purity of the concept changes you slowly," she said.
Over a period of 15 years, about six million Tsunamika dolls were made and sent to over 80 countries. The Tsunamika project has been given the 'Award of Excellence' by the Government of India and special recognition by UNESCO.
Tsunamika's storybook was published in seven languages, English, German, Russian, Danish, French, Tamil and Spanish. Tsunamika is the only project post-tsunami that is still active.
Prajapati said she was never tempted to use the brand equity of Tsunamika for her garments or tag the Upasana brand to Tsunamika.
"The concept is to upcycle waste to hope. From a symbol of hope, Tsunamika has now transformed to be the voice of the ocean, the voice of the coastline spreading the message that oceans are not dumping places for untreated sewage water and other garbage," she remarked.
The coastal community lists out three things that kill the ocean -- black water (untreated sewage), overfishing by trawlers and dumping of garbage.
Prajapati will be targeting school children to imbibe and also spread the 'save the ocean' message.
This thought gave birth to 'Paruthi' which was about growing organic cotton so that farmers can realise higher prices and the garment is made with eco-friendly cloth.
Working with about 600 farmers, Prajapati saw that organic cotton was grown in about rainfed 900 acres, in Tamil Nadu.
"We are looking at exports to Japan and Europe under the Upasana brand," she said. The company has brand outlets in Puducherry, Bengaluru and Pune while supplying to 20 other retail outlets.
That is a long long way from where she started when her father had told her painting and art were not stable income earners, she recalled.
"We had music, dance, painting tuitions at home. I learnt painting and music. Life was not difficult as father was into the automobile business," she said. But her parents were not sure of her professional choices at first.
Check out our in-depth Market Coverage, Business News & get real-time Stock Market Updates on CNBC-TV18. Also, Watch our channels CNBC-TV18, CNBC Awaaz and CNBC Bajar Live on-the-go!