Updated : October 27, 2018 08:47 AM IST
By the time, I reached the Tundra Buggy Lodge at Polar Bear Point, the evening’s dusky orange tinge had melded into an inky night.
Churchill in Manitiba (Canada) is known as the Polar Bear Capital of the World.

It is a lousy idea to fall in love with a predator. The world’s largest land predator.  Roughly 3 metres tall. Tipping 800 kg on the weighing scale. One that can jump 6 feet and run 25 kmph. His fur translucent; his tongue black. Adorably cute and cuddly. But an assassin so brute that a gentle flick of the paw can knock one dead.

But there was I. Flying 20 hours into Winnipeg (Canada) to meet the predator I madly love. To meet him in his den - in Churchill, the Polar Bear Capital of the World. A tiny town jutting into the Hudson Bay. No roads reach it (Winnipeg lies some 625 miles to the south), so a charter plane it had to be.

A quick plane ride and then a litany of warnings and -20 degree Celsius on the thermostat. “Remember, this is polar bear habitat. The terrain is rugged. The breeze frosty. You cannot step out for a walk; the cell phones will not work.

Do not dangle out of the Tundra Buggy. Do not be noisy. The conditions are sub-Arctic. Bundle up”. I iced up at the thought of three days of chattering teeth, frozen ears, feet chilled to the bone. The sole warm thought was the possibility of seeing a polar bear. The law of averages working in my favour -Canada can claim about 17,000 of the globe’s estimated 25,000 polar bears, and some 500 of them roam within range of Churchill.

As I hopped into the Tundra Buggy, a vehicle with 240 horsepower and 1.7 metre tall tyres, I forgot to sing a requiem to the dead cell phone. So mesmerised was I by the thought of watching polar bears in their natural habitat that the world could have crumbled and I would not have blinked. By the time, I reached the Tundra Buggy Lodge at Polar Bear Point, the evening’s dusky orange tinge had melded into an inky night. In one brisk moment, my world was dyed white. Pure white. Stark snowy landscape. Dainty ice floe on lakes.

The white-tailed ptarmigan with stubby bill and a scratchy zuk zeeek zeeek call. The white fox with prized fur. Snowy owl with a crafty white camouflage. And the four bogies of the Tundra Buggy Lodge resembling a stretched train parked in the middle of nowhere. My neatly printed name was stuck by a lower bunk with a green soft blanket, a tiny lamp, a square window with snowdrops peeping through the tidy pane. I have never lived in a dorm, never slept in a bunk, but the night in the middle of wilderness was magical.

Next morning, I was up before the sun. Full to the gill with piping hot pancakes and maple syrup for breakfast, I wriggled into the ski pants, zipped the jacket, pulled the ear muffs. 8 am. I had to leave for the day excursion. It was freezing; the chill was treacherous.

As the Tundra Buggy drove through the stark landscape, all eyes were glued to the window. The monotony of the snowy landscape was interrupted by brown kelp beds and withered willow. The Buggy was lumbering on the dirt track, curiosity was killing and anticipation was edgy.

It was so silent I could hear the bruits of my heart. I stood by the propane heater. Then, I heard a whisper, and a rustle, as if someone was stomping dried leaves with his mukluk. “There. There’s the bear. By the shore. Look at the brown bed of kelp,” the driver shut the Buggy engine and whispered. “Look at a 3 o’ clock position. There’s a bear”, he muttered. I peered hard. In the snowy sheath, white was the only hue. I peered hard. Harder. Then, I saw him. A few meters away, two 800-pound polar bears were sparring, playing in the snow, shaking the snowflakes off their translucent skin, grunting in pride, oblivious of the world – and the people – around them. The spectacle stupefied my wits. My jaw dropped to the floor.

For three days, my world turned completely bear-ish. I watched the polar bears spar, roll in ice, plod, meander, laze in snow. And when it was time to leave the Tundra Buggy Lodge at Polar Bear Point, the driver generously let me drive the 25-tonne gigantic Tundra Buggy. A petite me driving a 240 horsepower monster truck - the sight must have been ridiculous. I stepped on the gas and drove through miles of snow. That moment, I saw him again. One last time. The predator I love. The polar bear. In the Polar Bear Capital of the World. 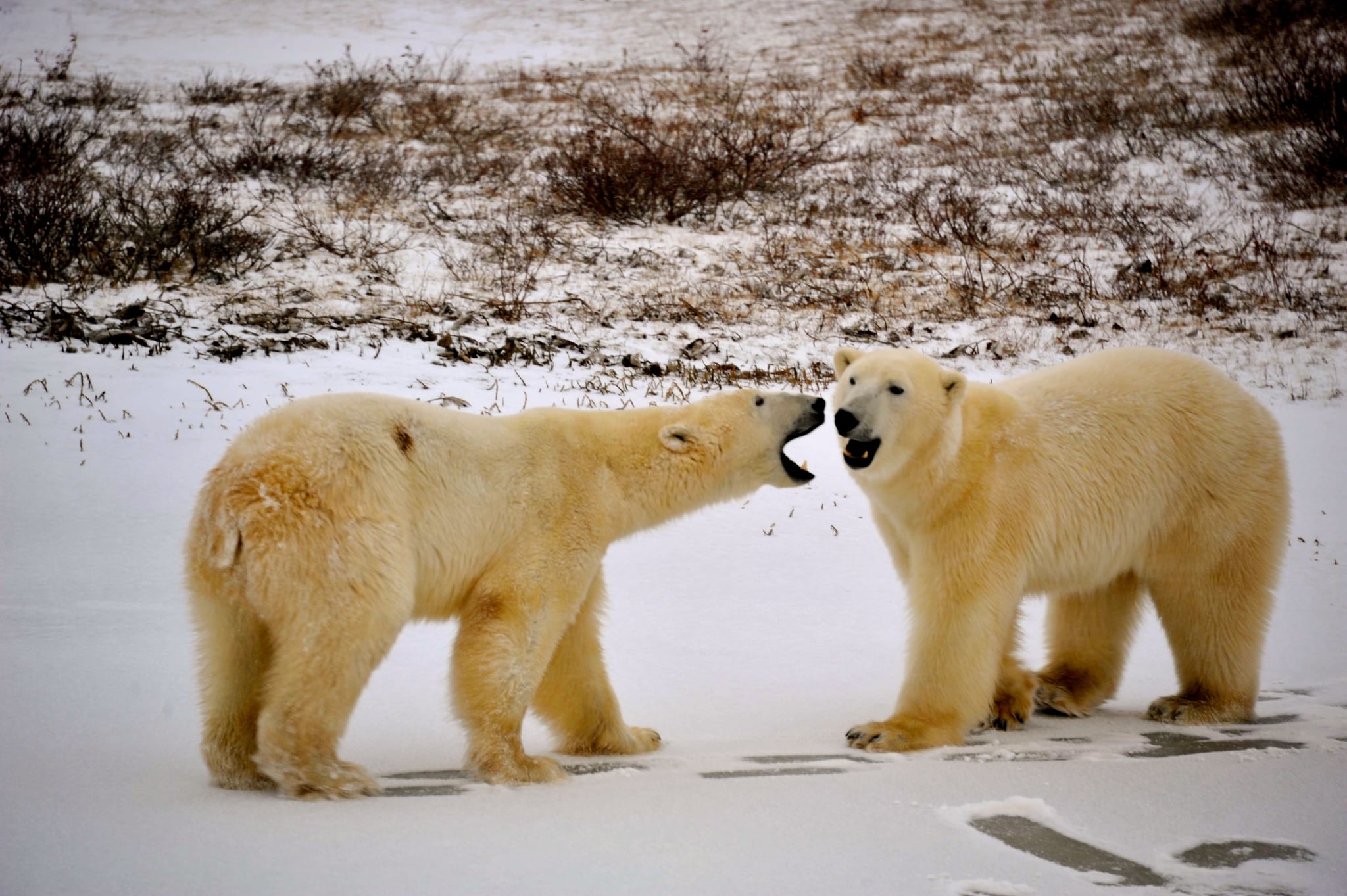 Male polar bears can weigh up to 800kg and can measure up to 3 metres long. October and November are the best months to see polar bears squaring off in mock fights called sparring. Polar bears have fur thicker than any other bears' and covers even their feet for warmth and traction on ice. Mother and baby bear walk the icy path in search of food. Churchill in Manitiba (Canada) is known as the Polar Bear Capital of the World. 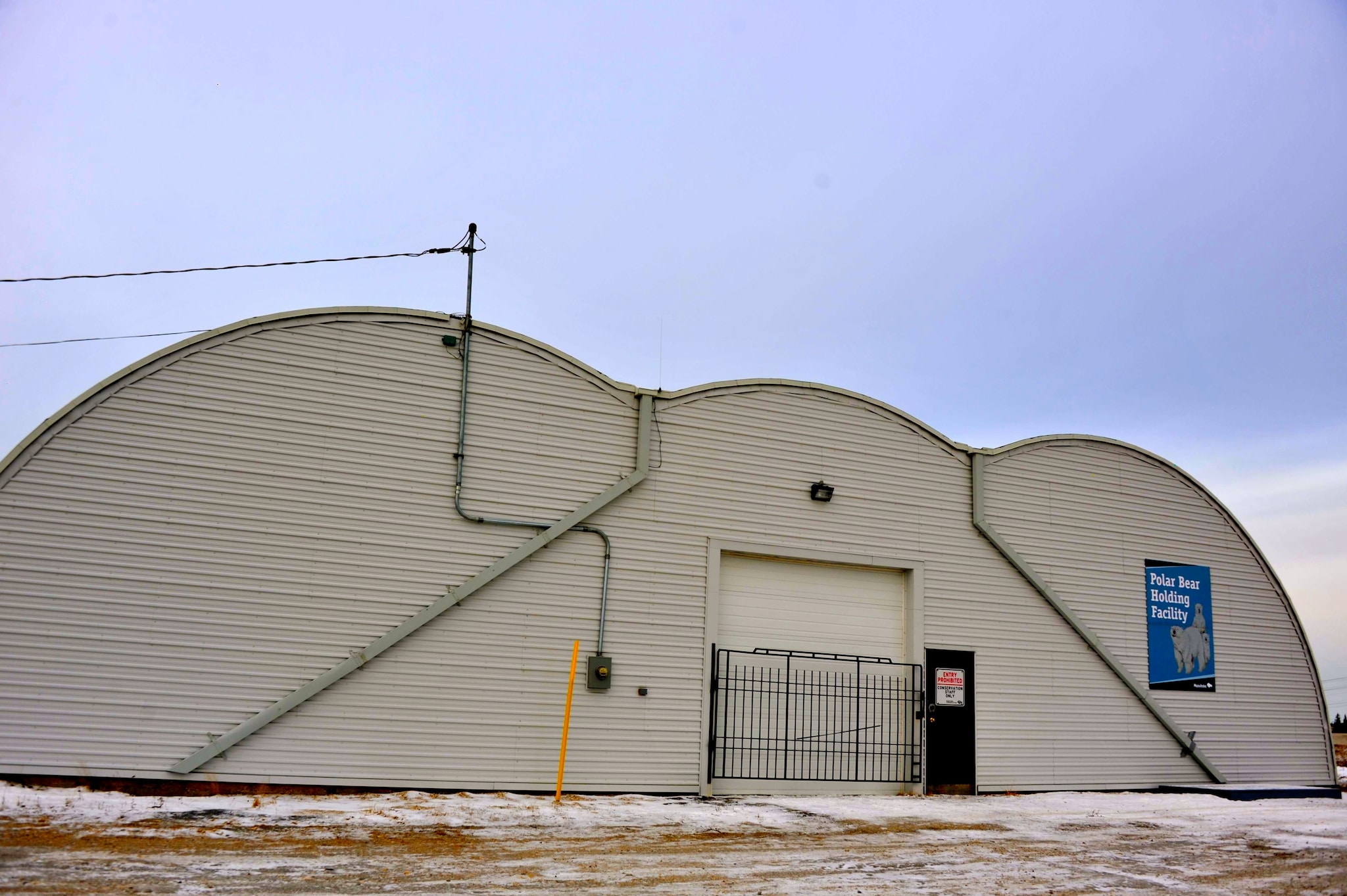 PolarBear_8: The town also has a Polar Bear Holding Facility, a prison for polar bears.