"You are my victim of the day.” A sinister sentence wrapped in a rich baritone rang through Dublin’s Iveagh Garden Hotel’s lobby as I sat shiftless on a sunflower yellow velvet settee. In the UNESCO City of Literature, I knew Bram Stoker created the blood-sucking Dracula here, but the one with the baritone was neither baleful nor wearing a cape.

"You are my victim of the day.” A sinister sentence wrapped in a rich baritone rang through Dublin’s Iveagh Garden Hotel’s lobby as I sat shiftless on a sunflower yellow velvet settee.

In the UNESCO City of Literature, I knew Bram Stoker created the blood-sucking Dracula here, but the one with the baritone was neither baleful nor wearing a cape. Dublin Literary Pub Crawl was ranked #4 in Sunday Times’ World’s 50 Best Walks. (Photo credit: Preeti Verma Lal)
With a silken blond mop and a natty blue suit, he looked more a munificent grandfather than a predator picking his ‘victim of the day’. He was Pat Liddy, Irish artist, historian, writer, illustrator, broadcaster, mapmaker, and environmental lobbyist, the one who runs Pat Liddy’s Walking Tours. That crisp September morning, Pat & I set out to find famous writers & their favourite drinking dens. Dublin Literary Pub Crawl starts at The Duke bar. (Photo credit: Preeti Verma Lal)
I, the teetotaller, never had a pash for pubs, but I’d go anywhere where James Joyce, Jonathan Swift, Oscar Wilde, George Bernard Shaw have been to - even a boisterous pub heavy with the whiff of alcohol. That’s a tedious task in a city with 800 pubs. One is never far from a pub, the city’s oldest pub is 821 years old. 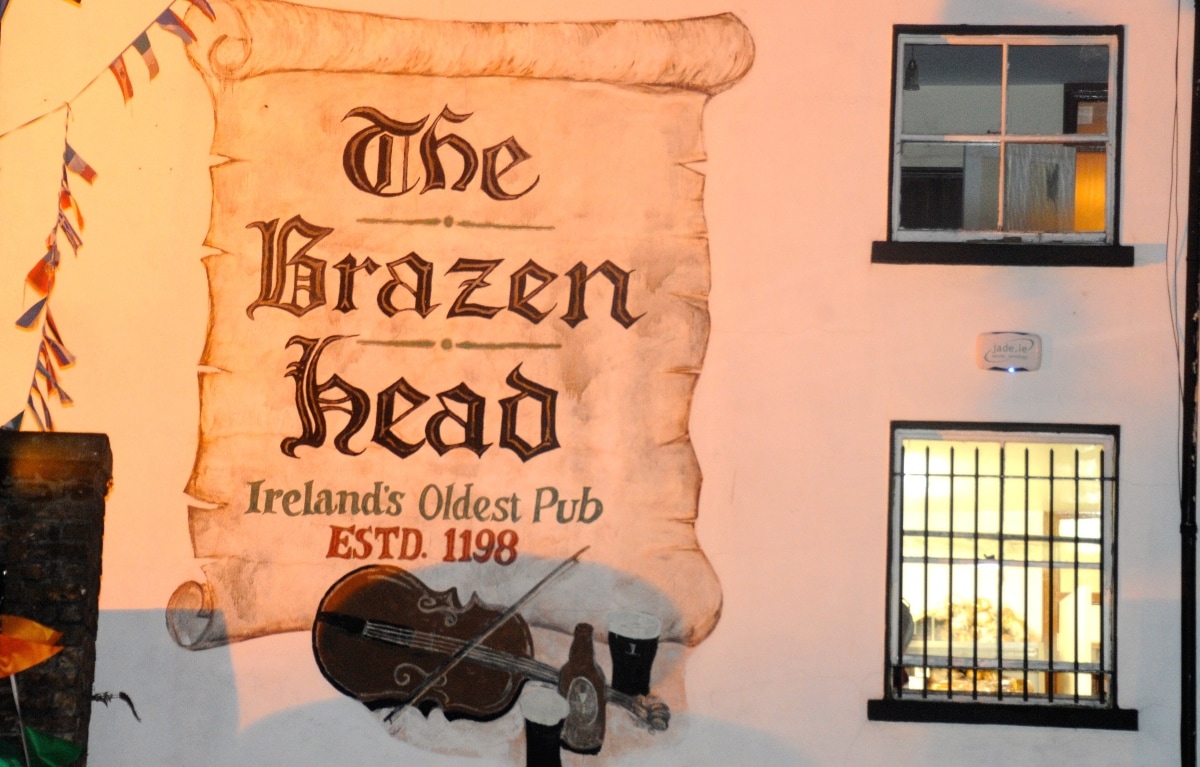 The Brazen Head is Ireland’s oldest bar. (Photo credit: Preeti Verma Lal)
Dublin is not an Alcoholic Anonymous’ nightmare; blame the pub on water. As early as Middle Ages water was so dirty that ale is what families drank at the dinner table.
By 1750, Dublin had 2,300 pubs for a population of 1.3 lakh and while I refused to peek at every pub, Pat Liddy narrated stories of writers and their drunkenness - Oscar Wilde could drink an entire beer keg; Bernard Shaw lauded alcohol as the anaesthesia by which we endure the operation of life while WB Years mourned that the worst thing about some men is that when they are not drunk they are sober. The Temple Bar has been a favourite with writers. (Photo credit: Preeti Verma Lal)
When the sun dipped in the Liffy River, I bundled up for Dublin Literary Pub Crawl which has been running since 1988. In the upper chamber of The Duke bar, two professional actors began enacting a scene from Samuel Beckett’s Waiting for Godot. 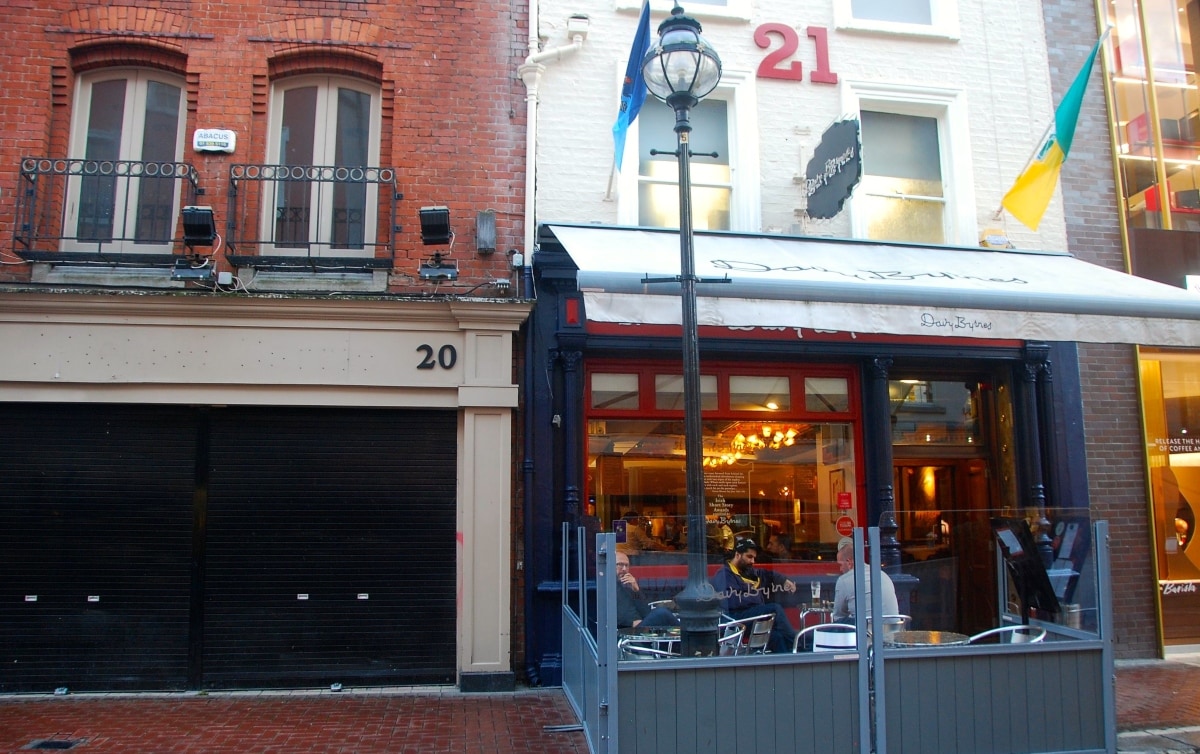 Dave Bryne’s is mentioned in James Joyce’s Ulysses. (Photo credit: Preeti Verma Lal)
Opened in 1822, this old watering hole was where James Stephens, James Joyce, Oliver St. John Gogarty and Arthur Griffith breezed into when they wanted a quiet reflective jar. In later years, the three great literary musketeers, Brendan Behan, Patrick Kavanagh and Myles Nag Copoleen experienced a transitory love affair with the premises.
A few steps away is Davy Byrne which was cast into literary fame when Joyce immortalised him in his Ulysses. On June 16, 1904, protagonist Leopold Bloom consumed his Gorgonzola sandwich and a glass of Burgundy in the pub. Such is the fame of Dave Bryne’s that every year on Bloomsday (June 16), literature buffs walk in to repeat Bloom’s wine and sandwich order. There’s a Beckett connection, too - he lived above the pub when he was a student at Trinity. O Neill’s Bar is integrally linked with the literary history of Dublin. (Photo credit: Preeti Verma Lal)
The next stop during the 2-hour Dublin Literary Pub Crawl was O Neill’s which is around the corner from Trinity College, Grafton Street and the world-famous Molly Malone Statue. A warren of interlocking rooms, it was the favourite haunt of poet Michael Longley, Brendan Kennelly and writer Brian Keenan.
No literary trail in Dublin can be complete without stepping into Brazen Head, the oldest pub in Ireland. Before you step in, you’d notice writer James Joyce’s head sticking out of the old stone wall. 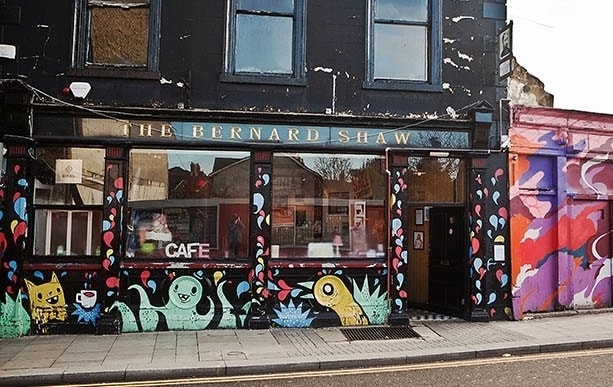 A bar in Dublin named after author George Bernard Shaw. (Photo credit: Preeti Verma Lal)
It is the James Joyce Award for ‘authentic Irish pub’. Beyond fiction, there’s a reality. Of Jonathan Swift ordering his ale here; there are stories about playwright Brendan Behan spending countless evenings in the bar with wooden staircase and roughly-hewn stones for the floor; of revolutionary Michael Collins who met his rebel brethren here. It is a favourite of singers Garth Brooks and Mary Black. And of millions of pub-prowlers who step in every year for the Irish stout.
In Ulysses, Joyce writes: Good puzzle would be cross Dublin without passing a pub. That morning in Dublin, I wasn’t Pat Liddy’s victim. That night in Dublin, I agreed with Joyce. I have no pash for pubs, but if William Butler Yeats is drinking somewhere, I’d step in. And order a glass of water.
Good To Know:
Pat Liddy’s Walking Tours: His Themed Tours include Literary Tour, James Joyce Tour, U2 Tour, Whiskey/Guinness Tours, Treasure Hunt, Macabre Tours. For details, visit www.walkingtours.ie.
Dublin Literary Pub Crawl: The crawl last 2.15 hours and involves walking approximately half a mile. For details, visit: www.dublinpubcrawl.com
Preeti Verma Lal is a Goa-based freelance writer/photographer.
Read her columns here.
Check out our in-depth Market Coverage, Business News & get real-time Stock Market Updates on CNBC-TV18. Also, Watch our channels CNBC-TV18, CNBC Awaaz and CNBC Bajar Live on-the-go!