Updated : March 08, 2019 07:50:58 IST
A 2002 batch IPS officer of the Uttar Pradesh cadre, Aparna has previously scaled prominent peaks in six continents and is looking forward to the seventh, Mount Dinali in North America.
Due to strong family support during my training and expeditions, everything becomes manageable, says Aparna.

Aparna Kumar recently became the first woman Indian Police Service (IPS) DIG and Indo-Tibetan Border Police (ITBP) officer to successfully conquer the South Pole, the southernmost point on the globe situated in Antarctica. A 2002 batch IPS officer of the Uttar Pradesh cadre, she has previously scaled prominent peaks in six continents and is looking forward to the seventh, Mount Dinali in North America. Aparna talks about how she caught the mountaineering bug and the highs and lows of her conquest.

Tell us about the experience of covering 111 kilometres, skiing up to eight hours a day, carrying equipment weighing 35 kg at a temperature of minus 40 degree Celsius, all within 12 days?

I reached Punta Arenas, Chile on December 31, 2018, and met other team members on January 1, 2019. On January 2, our guide Steve Jones checked our gear and equipment and gave us a briefing on the unique Antarctic environment, the Antarctic treaty as well as all the dos and don’ts. On January 3, we left Punta Arenas in the Russian cargo flight Ilyushin for Union Glacier, Antarctica. There, we sorted and packed our food bag, repacked all the things required for skiing to the South Pole, prepared our sleds and skied for a few hours pulling the sled for practice.

On 6th morning, we were dropped off at 89° South latitude by a smaller Basler aircraft. The real challenge and adventure began now in the complete cold wilderness of the Antarctic continent. We had to ski 601 nautical miles to reach the most southerly point on earth and experience the challenges faced by early explorers. Every day, we skied approximately 14 km and started the day at 9 am with six marches of 70 minutes each and a 10-15 minute break between each march. After the third march, we would break for lunch. Every day was different weather wise, altitude wise and while hauling the sled. Most days it would be very cold, extremely windy and foggy with low visibility. But during the day, we would sometimes get respite from the wind and foggy conditions with wonderful colours of the Antarctic continent displayed before us. The stark beauty and silence of the high polar plateau, the physical demands of sled hauling for 9-10 hours and the will power, grit and determination one needs to have to complete the journey – it was a life-changing experience.

On January 13, 2019, at 1.20 pm Chilean time, we reached the South Pole camp and at 3.25 pm, we reached the geographic South Pole. I had a sense of great relief and gratefulness to the Almighty at that moment. I had finally reached the place where the great explorers Roald Amundsen and Captain Robert Scott had reached. What were some of the challenges you had to face in preparation for the expedition?

In mid-November of 2018, I was unfortunately diagnosed with pneumonia in the right lung and had to be on medication and bed rest. The South Pole expedition was scheduled from December 30 onwards. I was completely shattered and apprehensive about the whole expedition. I could not train for more than 25 days, as recovering from pneumonia was important. Once I recovered, I had to train rigorously and learn skiing in a very short period of time and regain my strength and stamina. This was the toughest period of my life.

On the way to the South Pole, I broke my prescription sunglasses while skiing and I did not have a spare one. So, for my entire journey to the South Pole I used ski goggles. Even while going to the dining tent while we camped and after reaching the South Pole and in the airport, I was wearing my huge ski goggles—which was very hilarious! It was only after I returned to Punta Arenas that I could see properly. Apparently, you caught the mountaineering bug quite late in life. How did you get interested?

I saw the glorious snow-clad Himalayas for the first time in 2002 after I cleared the Civil Service examinations. After almost 12 years, my serious relationship with nature and mountains began in 2014 when I was posted as the Commandant of the 9th Bn PAC, Moradabad, in Uttar Pradesh. The 9th Bn PAC was previously known as the Special Police Force (SPF) and has had a glorious history of high-attitude mountaineering. It manned sensitive high-altitude posts along the Indo-

Tibetan/China border in Uttarakhand, which were later handed over to the ITBP. 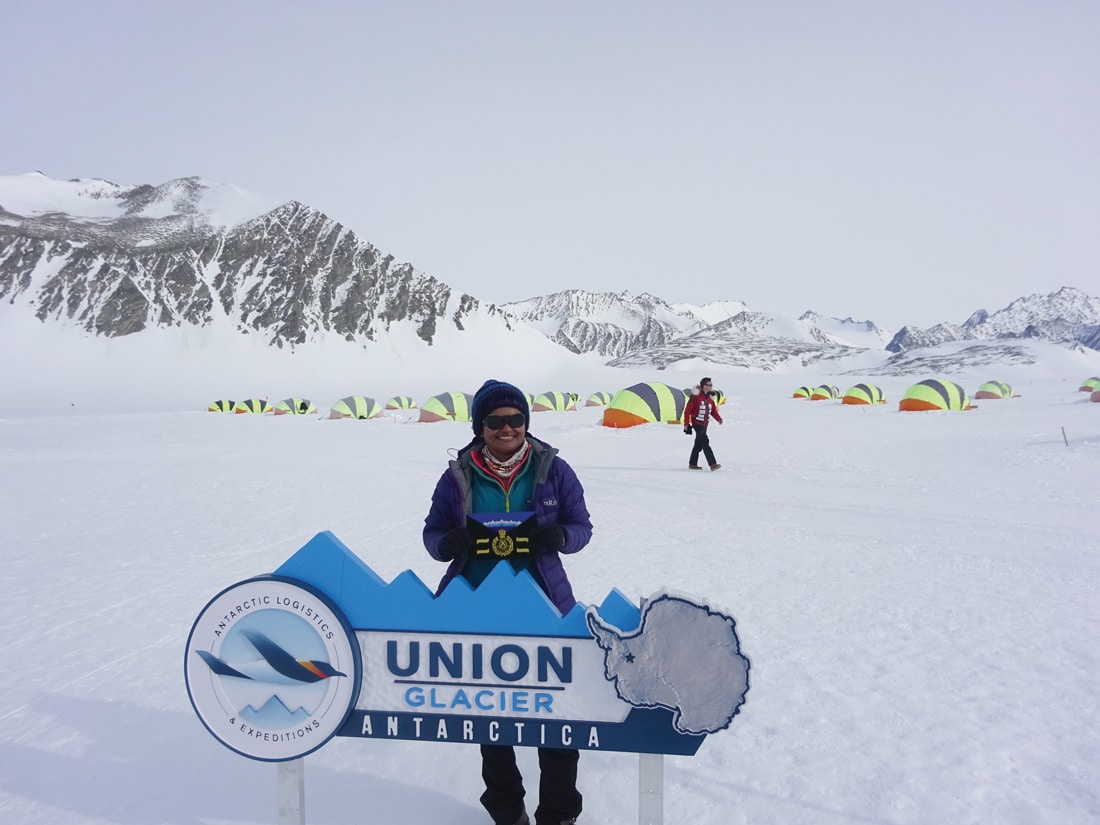 After scaling the top six peaks of six continents, including Mount Everest and trekking Antarctica's highest peak Mount Vinson, what's next in store for you?

As a mother of two young children, tell us how you balance your family life, work and climbing pursuits.

It is tough and I have to sacrifice a lot of things. However, due to strong family support during my training and expeditions, everything becomes manageable. My mother helps in taking care of the children and the family. My husband shares his responsibilities, and is the real behind-the-scenes hero managing the logistics, finance and all other miscellaneous things.

Women are experts in multitasking and I am very disciplined, extremely motivated and manage time efficiently to be able to be involved with and enjoy every moment of my family life, career and climbing pursuits. What is your advice to aspiring mountaineers?

I started off from scratch with no background in mountaineering or climbing, and also very late in my life. I could have failed miserably, but I took the risk and began my journey one step at a time. I look forward to many more opportunities and possibilities.

We all are capable of doing more than we believe, if only we would just try and not be afraid of failure. I want to tell women that there is no age for dreams, passion and vision. We should not put limits on ourselves and never give up on our dreams or passions despite innumerable failures. We have to challenge ourselves, come out of our comfort zones and discover new opportunities and possibilities. We need to become the game-changers and change agents and provide a platform to inspire the next generation.