This social enterprise equips small-town women with wheels of freedom

Updated : February 09, 2019 12:03 AM IST
The Mathura housewife and mother of two badly wanted to learn how to ride a Scooty, even though she had no personal or professional compulsion to do so.
Eventually, after three years of trying, she finally learnt to ride a scooter.

Pawani Khandelwal’s mom Rekha always envied women who could ride cycles or drive cars and scooters. The Mathura housewife and mother of two badly wanted to learn how to ride a Scooty, even though she had no personal or professional compulsion to do so.

Eventually, after three years of trying, she finally learnt to ride a scooter. One day while talking about her driving adventures, Rekha told her daughter Pawani that every time she rode her Scooty, it felt like she had got wings.

“That statement right there made a very deep impact on me,” says the 24-year-old Indian School of Business student. “I had been riding a Royal Enfield 500cc for so many years and yet I never realised that such a small thing could change a woman’s life completely – a woman who had always been dependent on someone else for all her life’s needs and decisions. My mom transformed after learning to ride a Scooty and this change was something I wanted to empower every Indian woman with.” The conversation laid the roots for Pawani’s own enterprise Aatm Nirbhar, which she launched in November 2017. A social venture with the vision to empower every Indian woman through mobility, they operate as a two-wheeler driving training school in Jaipur, Agra, Lucknow, Mathura and Bharatpur with a team size of more than 50 self-motivated women.

So far in one year, they have impacted the lives of more than 2,000 women, helping them become self-reliant for daily chores like going to work, dropping kids to school or shopping.

They also provide sustainable and flexible livelihood opportunities to women from low-income families by employing them as trainers, managers, designers, developers and so on. “Aatm Nirbhar translates to self-reliance. It is an enterprise of women, by women, for women,” says Pawani, who did her Bachelor’s in Business Administration from Symbiosis University, Pune. Though she was born and raised in a “typical patriarchal society” in Mathura, Pawani considered herself very privileged compared with other girls and women around her who were still struggling to secure basic human rights for themselves.

Coming from a business family, entrepreneurship was in her blood, and her upbringing encouraged the feminist inside her to do her bit in transforming the lives of other women.

“Millions of women in India miss out on social and economic opportunities on a daily basis due to lack of public transport and dependency on others, mostly male counterparts, for transportation,” says the enterprising young woman. Small towns in India often don’t have basic infrastructure and systems in place for safe public transport. If a woman can take care of her own transportation, she automatically has access to a world of opportunity.

Pawani’s business plan is simple and the investment required is mostly towards manpower and administration. The organisation doesn’t own any scooters. The trainers either use their own scooters or the students’ scooters for training.

Pawani narrates stories after stories of how their trainers’ lives have changed after coming on board. “One of our trainers in Jaipur, Nisha has powered through many personal difficulties in life. Last month, she bought an i20 car with her own money. The happiness on her face was evident as she thanked Aatm Nirbhar for her success and independence,” Pawani says with pride. 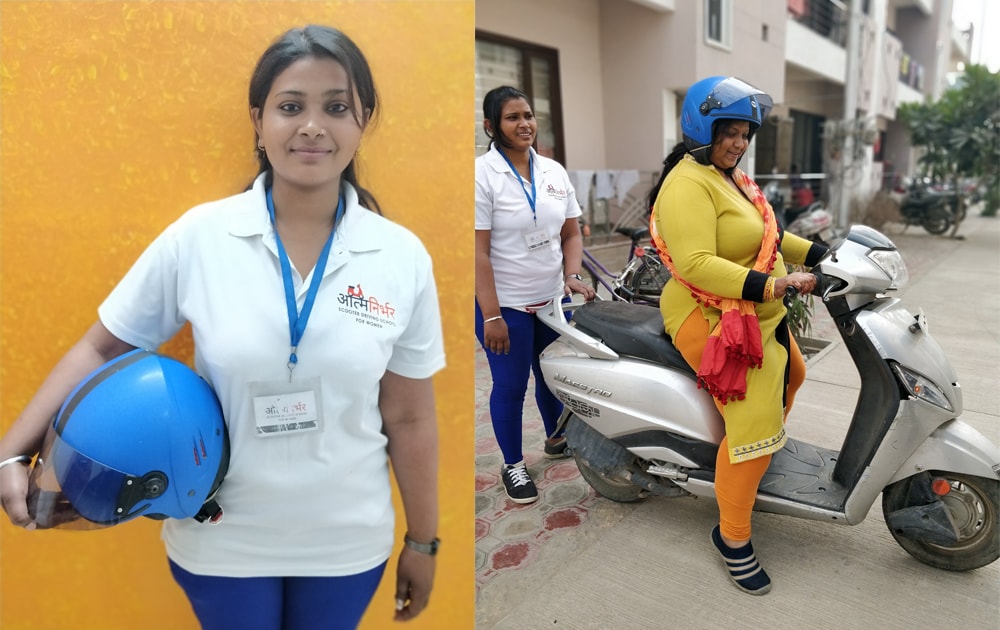 Another trainer, Sushila, used to assist her mother who worked as a maid in Mathura, and earned just Rs 1500 a month. She reached out to Aatm Nirbhar and joined them. Soon after joining, she was able to earn enough money to buy her own Scooty.

There are big plans afoot for the future. “Aligning with our vision to empower women through mobility, we plan to expand pan-India: 131 cities in the next two years all around the country. We plan to provide employment opportunities to women as delivery personnel for various e-commerce and food companies. We also plan to delve into the field of four-wheeler driving training for women very soon,” she says.