This Raid de Himalaya rallyist’s mantra is, “Don’t be scared. Be prepared”

This Raid de Himalaya rallyist’s mantra is, “Don’t be scared. Be prepared” 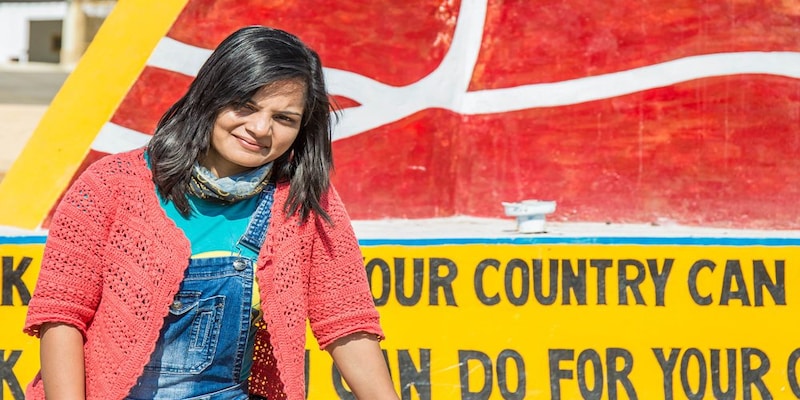 Sarah Kashyap is the only woman biker ranked among the top 10 rallyists from India, and it’s been a tough, adrenaline-spiked ride.

There she was, a five-foot nothing 29-year-old astride a modified Royal Enfield, riding close to 3,000 km over the toughest terrain in the world. It was the Raid de Himalaya, considered the mecca of rallyists, the highest rally raid in the world at 6,000 metres above sea level, a race only 20 percent of drivers finish.

After five days of riding in the October chill, with extremely low oxygen levels, over roads that were mostly icy river beds, sleeping in minus 25˚C, and waking up at 4:00 am to start off again, Sarah Kashyap confronted a roadblock of a more painful kind.
She fell and broke a collarbone.
But it was the last day of the race and there were only 200 km left to go, and there was no way Sarah was giving up after coming this far. Not having a backup team was a major mistake, she thought to herself. Gritting her teeth, Sarah got back on her bike and willed herself to finish the race.
She became the first Indian woman to ever do so. And it was her first-ever attempt. “You hardly get to see one woman among every 70 or 80 men in a rally,” Sarah narrates. “Motorsports are considered a male domain.” But Sarah was used to sticking out. Born in Chandigarh, Sarah was greatly influenced by her intrepid father who loved biking cross-country on holidays and a brother who went for judo practice with her and was instrumental in her becoming a gold medallist in National Judo Championships in her younger days.
“My brother first taught me to ride a bike,” smiles Sarah of how her lifelong obsession began, fuelled by her father who coached her, “Don’t be scared. Be prepared.”
Though motorbikes were her first love, Sarah did try going the usual corporate route in her career. After completing her MBA from the UK, she worked at Google’s UK office before returning to Chandigarh where her parents lived. A good job offer lured her to Bengaluru. She bought her first bike with her own salary there, and one fine day, decided to go from Bengaluru to Chandigarh all by herself on it.
“It took 21 days,” she recalls. “I mostly stayed at army accommodation or hotels. People were shocked to see a girl like me biking alone, but it was great.” Though she hadn’t told her parents she was arriving on a bike, her father got a whiff of it. Instead of being upset, however, he was proud. “Go on, go to Ladakh alone now, complete your journey,” he said. And so, off she went.
Soon after, she landed a job at her dream company: Royal Enfield. As part of the strategic initiatives team in Chennai, she was one of the key people to test new features on the legendary Indian motorbike. “I was the only girl in the core ride team; in fact, I was one of very few in the entire automotive industry,” she chuckles. Then Raid de Himalaya happened, and then Desert Storm, where Sarah is the only woman to be in the overall top 10 of any cross-country rally in India. Her next target is the Dakar Rally 2019 in South America, where she aims to be the first Asian woman ever to make it to the start line.
The 33-year-old has moved to Manali so that she can train in the hills. She’s also hired a crew and trains other women to ride bikes. She rues the lack of professional institutes for motorsports in India but is optimistic about the future of the sport, even if it’s an expensive one.
“My brother asks me, why don’t you get married and live a normal life? But he’s only joking. I became a rallyist when I was nearly 30 years old, and it has transformed my life. I have learnt to be tough and to believe in myself. I used to be afraid of falling off a cliff, but now I feel no fear. Even if I slip or fall, I know I will keep going till my last breath.”
Right now (October 8-14), Sarah is racing at the 20th edition of Raid de Himalaya, and there’s only one reason why: “This is my calling.”
First published in eShe magazine
Check out our in-depth Market Coverage, Business News & get real-time Stock Market Updates on CNBC-TV18. Also, Watch our channels CNBC-TV18, CNBC Awaaz and CNBC Bajar Live on-the-go!