These 4 women graphic novelists have an agenda: Humanism and equality

Graphic novels can be powerful tools of making a humanist point. Last year, 16 female comic artists from India and Germany came up with a book of graphic stories called The Elephant in the Room: Women Draw Their World, edited by SPRING, a collective of women artists.

The purpose of the book, as the editor Manjula Padmanabhan explained in the foreword, is to capture the experience of being women. The contents of the stories range from the vagina to motherhood, body image to rape and domestic abuse, and even shaving body hair.

As a tool to talk about topics usually kept under wraps, the graphic novel has certainly earned its space. Here, we feature four women whose novels have become talking points, and have raised important issues and injustices in society.

Visual storyteller Aaniya Asrani’s latest work Portraits of Exile looks at the lives of Tibetan refugees in Karnataka. Priya Kuriyan’s bold and brilliant book Drawing the Line is a visual depiction of young women responding to the Delhi gang-rape in 2012.

Author-illustrator, visual storyteller and multidisciplinary artist, Aaniya Asrani envisions the world as an intricate labyrinth of stories, where with each encounter one has the opportunity to learn from the lived experiences of others. The perplexities of human existence and a curiosity to understand and share perspectives drive her artistic practice.

“I look at storytelling as a catalyst for changing the perspective of another through an exploration of the stories we carry with us, which I see as increasingly necessary in our current socio-political environment – one built on the foundations of ‘imperialist white-supremacist capitalist patriarchy’ as Author Bell Hooks describes in her essay Understanding Patriarchy,” she says. Her recent series of three creative non-fiction books, Portraits of Exile: 'Homebound', 'Homeland' and 'Homecoming' (Katha, 2019) is based on the lives of Tibetan refugees living in Bylakuppe, Karnataka. The books explore the idea of home and what it means to live a life in exile through the eyes of 76-year-old Kizom, a young girl named Jampa and a monk named Lobdorjee.

Asrani hopes these graphic novels will sensitise future generations about the ramifications of large-scale social and political movements. “I aim to bear witness to personal anecdotes, oral histories and traditions that would otherwise be lost in a fast-paced apathetic world – in turn, providing a platform for care, understanding and empathy through storytelling and graphic art,” she adds. India’s first popular female graphic novelist, Amruta Patil lives between the French medieval town of Angoulême and Goa. She incorporates acrylic painting, collage, watercolour and charcoal in her artwork. Recurring themes in her feminist work include memento mori, sexuality, myth, sustainable living, and the unbroken thread of stories passed down from storyteller to storyteller through the ages.

Her work has been translated into French and Italian. In 2017, she was awarded the Ministry of Women and Child Development's Nari Shakti Puraskar by the President of India, for “unusual work that breaks boundaries” in art and literature. 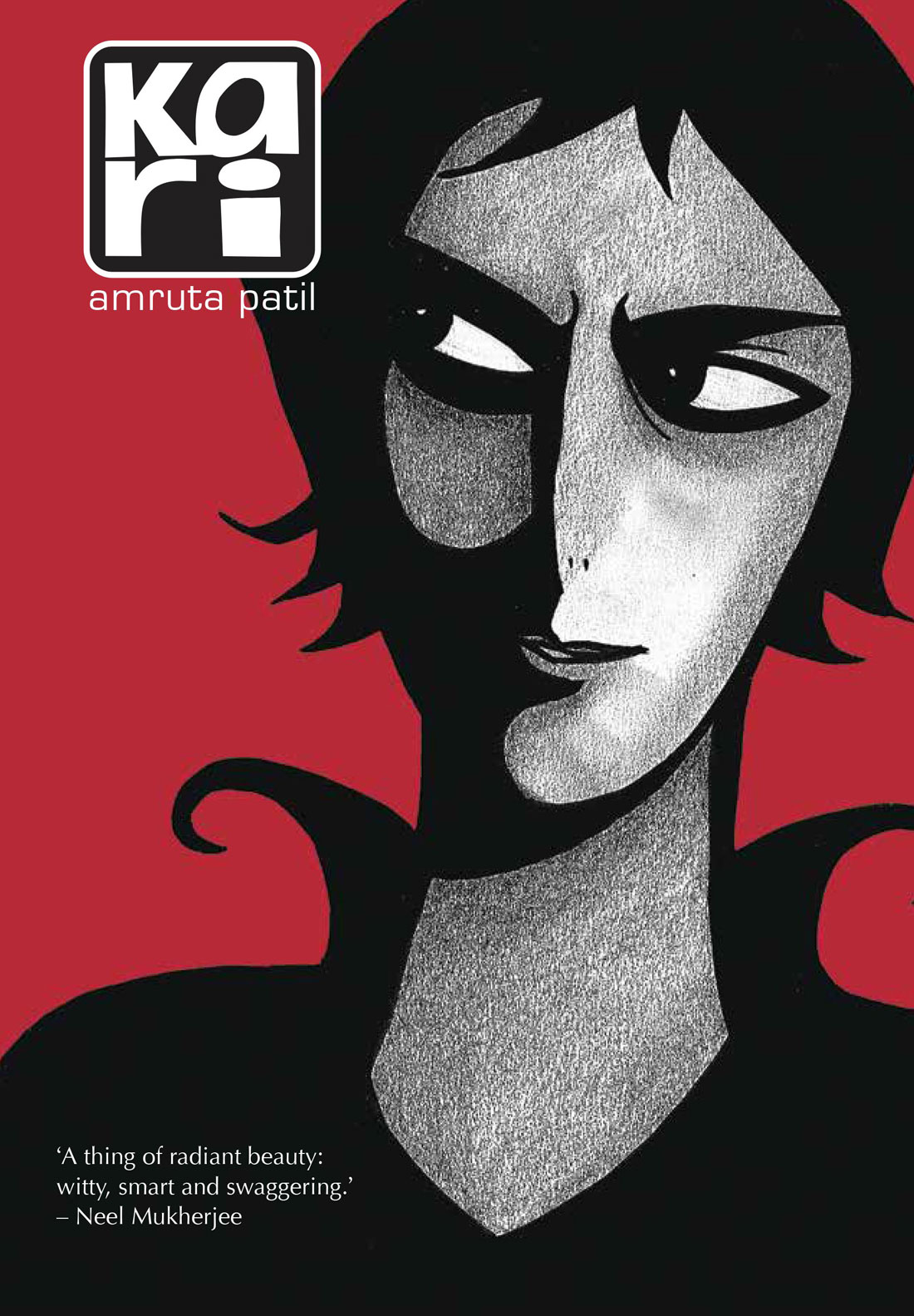 Amruta is most well known for her critically acclaimed debut graphic novel, Kari (2008), described as an urban exploration of female sexuality and psyche. Kari, which explores themes of sexuality, friendship and death, has been applauded for giving a new voice—and female perspective—to graphic fiction in India.

The book's coming-of-age protagonist, Kari, was one of Indian literature's first queer leads. Her two subsequent graphic novels, Adi Parva: Churning of the Ocean (2012) and Sauptik: Blood and Flowers (2016) make up the Parva duology, which retells stories from the Mahabharata from the viewpoint of narrators Ganga and Ashwatthama. 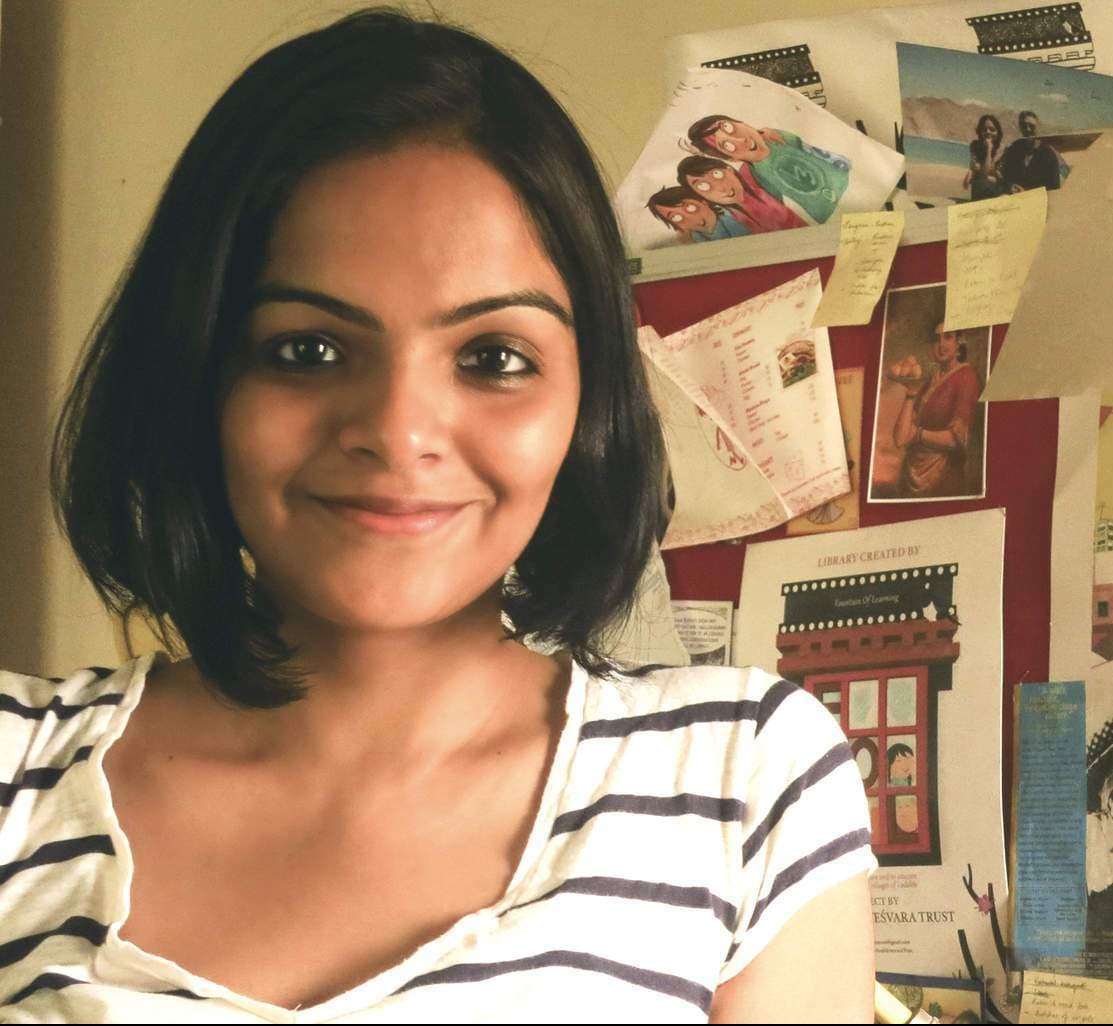 New Delhi-based Priya Kuriyan is an independent animation filmmaker, children's book illustrator, comic book artist and an animator. She is best known for her book Drawing the Line: Indian Women Fight Back (2015). The book, which was created in a week-long workshop by the feminist publisher Zubaan as an attempt to get more women to step into sequential art and graphic storytelling, is a bold and brilliant collection of true visual stories.

In the book, 14 young women respond to the activism, debates and protests in the aftermath of the brutal Nirbhaya incident in December 2012. 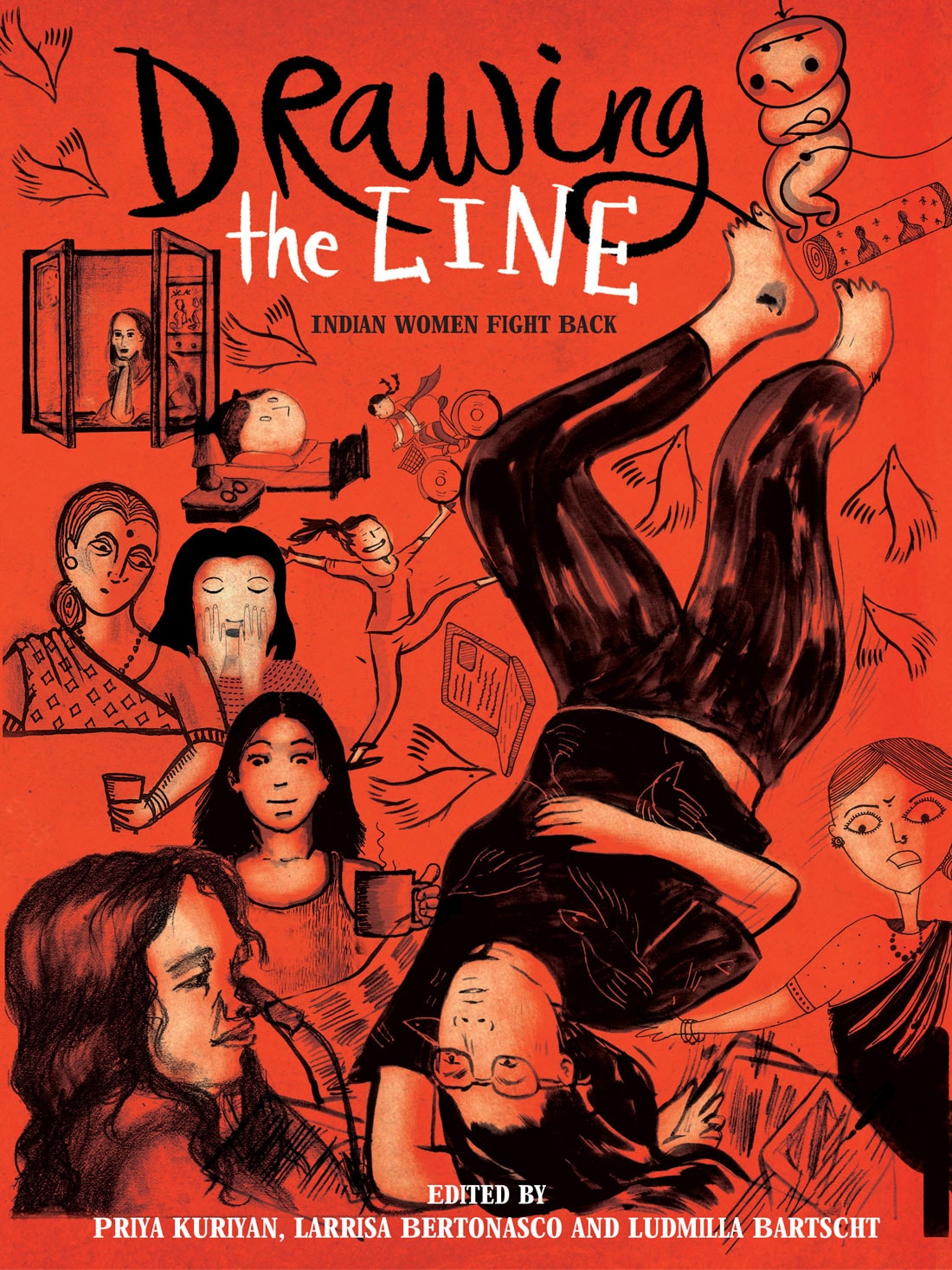 The chapters cover universal themes and struggles that women encounter on a daily basis such as gender, sexuality, harassment, coming of age, family, sisterhood, racism, classism and political struggle.

Another of her notable books is Indira (2018), a graphic biography of Indira Gandhi. “There is something very different and truthful when women articulate issues that matter to their own gender, themselves, in their own words (and pictures in this case),” she writes. 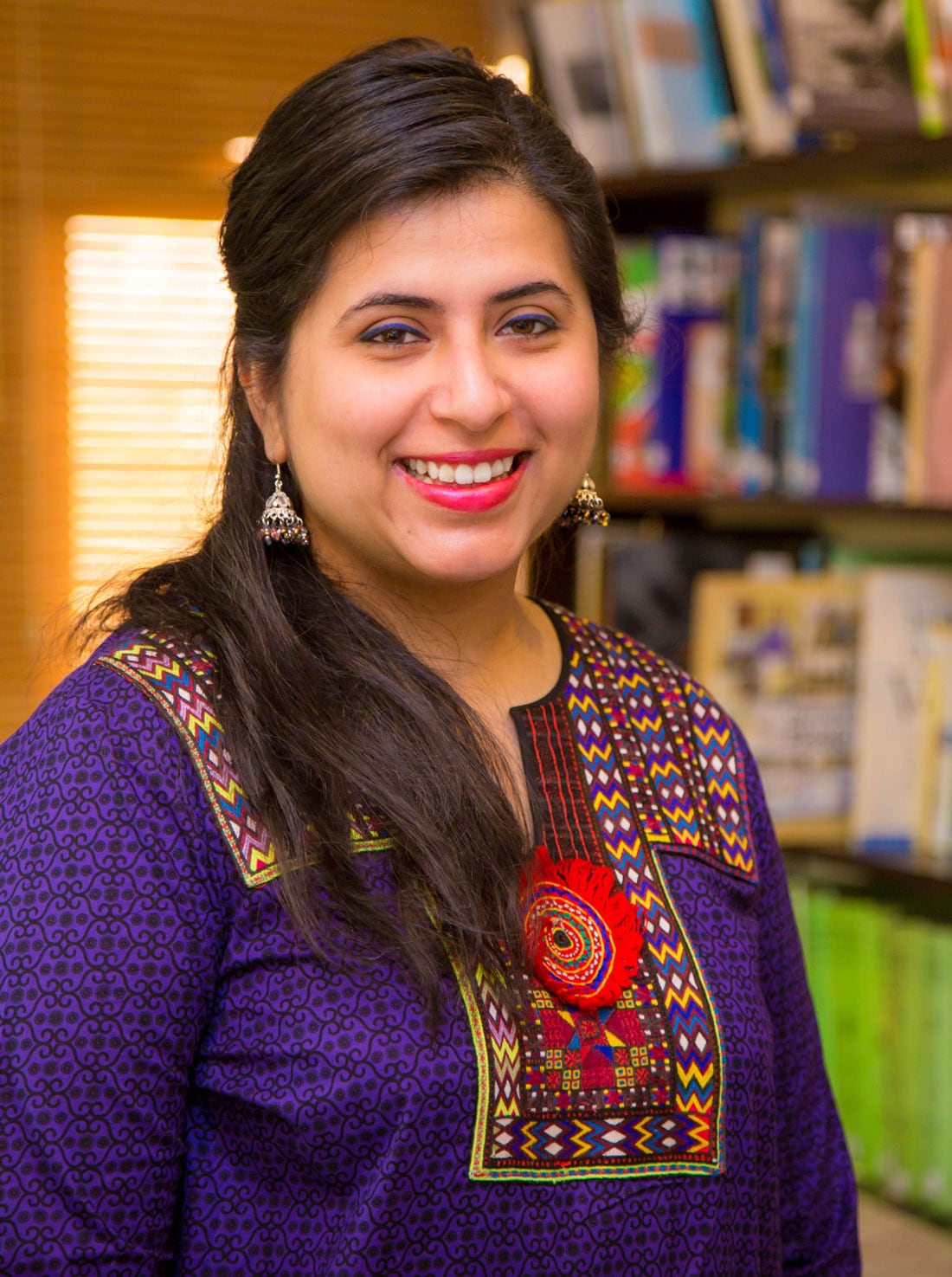 Karachi-based Ayesha Tariq is a multidisciplinary artist who dabbles in improv, stand-up comedy, drama, illustration, music and is curious about more, “and sometimes nothing at all.” She graduated from The Indus Valley School of Art and Architecture with a degree in communication design, and “has been trying to adult since. Currently curious and confused by the humanity within me and around me,” she quips.

Ayesha is best known for her book Sarah: The Suppressed Anger of The Pakistani Obedient Daughter (Penguin India, 2015), which she has written and illustrated. Its protagonist is teenager Sarah, belonging to a conservative urban family in Pakistan. Sarah has to do all the chores of the house, keep her family members happy and her reputation clean so that people don't gossip about her, and always look good so that she can be the ideal candidate for the rishtas that come her way. All this really upsets Sarah, but she can only suppress her anger—until her patience runs out and she cannot hold in her indignation any longer. “Women go through so much on a daily basis. There are so many messages that we have to unlearn as we grow old. So much unpacking! We don't want caricature versions of us, we want all representation. And I think, for that, the world needs to be more encouraging of female perspectives,” says Ayesha.

The book, a hilarious take on the struggles of being a Pakistani girl, happened after Ayesha had a fight with her family. She then made a list of things that she and her women friends went through on a daily basis – hypocrisy in society, sexual abuse and gender biases.

“I have been creating to work through my own ideas, patterns and feelings. The world did not feel safe for me, so I communicated through my work the difficult conversations I wish I could have in person. Whenever I have put my work out there, someone has connected with it, and I think it comforts me that my work is able to open up a space to start a conversation. Conversations make the world a safer place. There is a big power in sharing your narrative; it invites connection, love and personal and communal growth,” she says.

She adds: “There is now more and more room for women to speak up, and though it is difficult, we must take up that space.”