Theatres of memory: How a private love for art turns into a public treasure

Updated : May 25, 2019 06:22 AM IST
The Pink City’s two jewellery brands, which have a global footmark, are giving back to the city with their carefully curated private museums.
Gyan Museum is an ode by two sons to their jeweller father’s personal collection of over 2.500 objets d’art, jewels, antiquities and textiles.
Amrapali Museum is a repository of India’s jewellery traditions, from tribal to royalty.

In Jaipur, jewellers are often considered ‘semi-royalty’ with strong ties to both the erstwhile royal family, the one-time rulers, and the mercantile and business community. Many have, over time, established modern businesses, even setting up a network internationally. Two of Pink City’s legacy jewellers have given back in equal measure to the city that moulded and influenced them.

Gyan Museum: An ode to a jeweller’s passion for collecting

In a corner of Sitapura Industrial Estate, at the southern end of the city, stands Gyan Museum, a minimal, meditative retreat that holds priceless treasures in the form of antiques, textiles, sculptures and art. Unlike India’s crumbling government-run museums, the modernist Gyan Museum with its ancient cache of everything rare is an ode to one man’s passion for travel, culture and collecting. 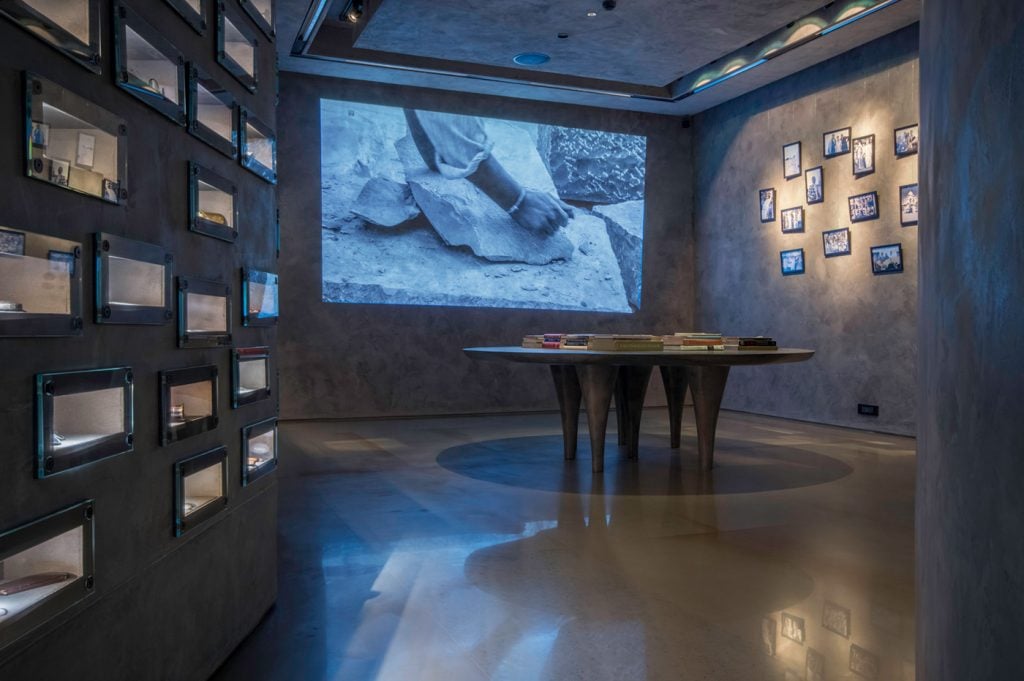 The modernist Gyan Museum with its ancient cache of everything rare is an ode to one man’s passion for travel, culture and collecting.

The late Gyan Chand Dhaddha turned a collector at the age of 16, when his father gifted him two objects, both jewelled hookah mouthpieces that sparked in him the fascination for India’s diverse history, and its art and antiquities. In 2009, his sons Suresh and Arun Dhaddha, who inherited the business, began unravelling mounds and mounds of his collection of artefacts, many of them lying in dusty cupboards, family vaults and storage rooms. What they uncovered was a treasure not just worth billions, but one that narrated the rare story about the world’s cultural and artistic evolution.

Akhil Dhaddha, creative director of Gyan Jewels, the man in charge of the museum and Gyan Chand’s grandson, recounts, “We knew there was a lot of very rare and expensive things in his collection, but we weren’t aware of the extent or its vast sweep. We found such amazing textiles that had been stuffed in bags for too long.”

The museum holds 2,500 such objects, with an antiquity over 100 to 3,000 years old: Mughal miniatures; glittering jewels, many as precious as those in established cultural institutions; textiles; paintings; vintage spectacles; rare inscriptions and objets d’art. Among them, a four-leaf clover, a piece of Sulemani agate, considered to be very rare, which he used to wear as a pendant and now forms the logo of Gyan Jewels. There are luxurious wall hangings and the finest Janamaz (prayer mats); there is a painting of people praying to Goddess Laxmi, but made in the style of Mughal miniatures, pointing towards the syncretic culture; there are 175 jewelled gold and silver hookah mouthpieces from the 17th century, installed in a series of vertical sculptural installations grouped around a reflecting pool,

The glass shelves hold Mughal sarpech (which Emperors wore on their turban) from the 17th century; pocket watches from 19th century India; vintage watches and clocks from brands such as Patek Phillippe, Omega, Tiffany and Vacheron, which Gyan Chand bought on his travels to Europe; jewellery such as a pendant featuring a 4-carat blue diamond from the fabled mines of Golconda, and a green glass Thewa necklace engraved with gold leaf, the handiwork of artisans of a single family who served as court jewellers to the rulers of the princely state of Pratapgarh.

The minimalist space, dominated by dramatic spotlights, grey walls and a spectacular Murano chandelier was created by Paul Mathieu, a French-born, New Year-based furniture and lighting designer. The museum has a retail space for Gyan Jewels, a label of contemporary jewellery which are inspired by the objects in the museum. “They echo the details found in the paintings, textiles and traditional Indian adornments,” says Akhil Dhaddha. Among them is Blooming Arrow (inspired by medieval Mughal paintings, bringing to life subtle colours of vegetable pigments with rubies, emeralds, pink opals and black onyx set in 18-karat rose gold) and Lattice Collection (referencing historic architectural motifs). The Dhaddhas are now building a café and a gallery where they host contemporary art exhibitions to draw more people to this private museum.

At the other end of the spectrum is Amrapali Museum, set in a Rajasthani haveli-sque structure, bang in middle of a buzzing, tony C-Market, beautiful motifs adoring its ochre-red facade. The 6,000 sq. ft museum houses rare and stunning pieces of jewellery from India’s varied jewellery traditions – from tribal to royal, assiduously collected for over 50 years by Rajiv Arora and Rajesh Ajmera, founders of Amrapali Jewels. The cousins began collecting when they were in college, foraging for old pieces across the swathe of India. 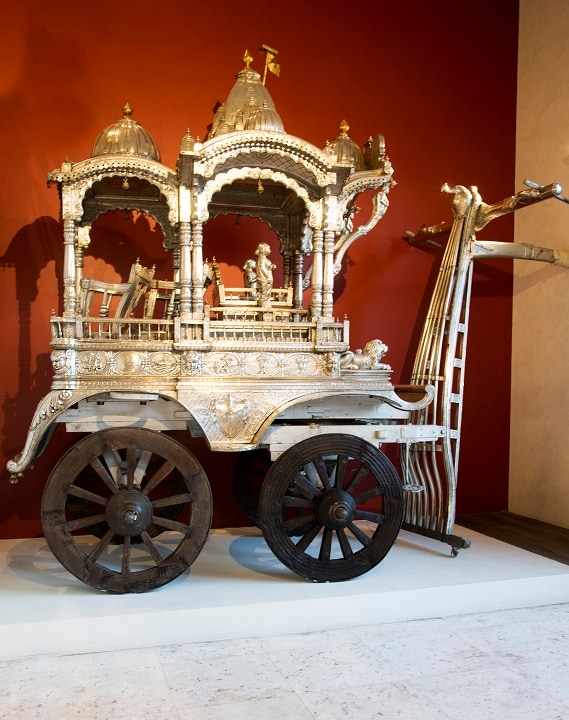 A humungous silver chariot with a Krishna image dominates the lower level.

“When our next generation joined the business, we decided to focus on the museum and create a wonderland of the best of Indian jewellery traditions that reflect our cultural heritage,” says Ajmera. The hushed halls of the museum showcase over 2,000 pieces, which offer an insight into India’s history of art and craftsmanship. I spent over two hours walking past shelves and drawers filled with pendants, earrings, necklaces, bracelets, tribal ear covers, borla (head ornament), mukut (bridegroom’s crown) and other forms of personal adornment. Peppered across the shelves were also some unusual objects — scepters, pandaans, kamandalu, hookah, khaasdaan (betel leaf containers), anklets, rosewater sprinklers, inkpots, araipatta (waist bands), bichwa (toe rings), sprinklers and more. A humungous silver chariot with a Krishna image dominates the lower level.

“Look at these pieces, they are not just jewellery,” says Ajmera. “They reflect every important milestone of a person’s life — from rites of passage, birth to death; wedding; childbirth; family functions; even religious rites.” Housed across two floors are pieces largely from the 18th and 19th centuries. While most are from India, there are some from other parts of the Asian region, from undivided India and a few from across the world. Arora points out that some of the pieces could be older heirlooms.

Among the rare pieces are a Paris necklace created in 1929 and inlaid with letters outlined in blue enamel, that read ‘HUMATA HUKHTA HVERSTA’ (Good thoughts, good words, good deeds)

The ancient skills of craftsmen are on display; even though there is a lot of similarity between jewels from Rajasthan and Gujarat, the jewels are indicative of their indigenous traditions which have helped create a sumptuous repertoire of jewels. Among the rare pieces are a Paris necklace created in 1929 and inlaid with letters outlined in blue enamel, that read ‘HUMATA HUKHTA HVERSTA’ (Good thoughts, good words, good deeds); mukhnaals or mouthpieces of hookah with quirky designs such as hand and fish-shape or two men sitting on an elephant; a pair of golden mojris studded with rubies, created in the 19th century; modernist earrings worn by tribal women from Nagarcoil in the 19th century; and even a Jade bookstand once used to read the Quran, crafted from a translucent nephrite jade and inlaid with gold.

If Jaipur, Varanasi and Lucknow were the centre of the finest minakari (enamel) work, the kundan jewels are an introduction to the once-famous jewellery karkhanas (workshops) of Bikaner, Punjab and Delhi. While kundan is a northern Indian jewellery tradition of yore, Mughals adorned the reverse side of kundan pieces with mina work, giving the wearer a more luxurious ornament. “From the tribal jewellery traditions, we have drawn a whole range of silver jewellery. The tribal and the rural folk wore silver, while the royalty wore gold and gemstones, a division that gave rise to very different traditions,” says Ajmera. The range of traditional tribal and rural jewellery, with their indigenous symbolism, design and craftsmanship is on display at what is India’s first jewellery museum.

These private museums offer an insight into the world of India's private collectors and new perspectives into their history.