Not sure you did the counting, but the numbers can bend the mind - there are 37 million churches around the world.

Not sure you did the counting, but the numbers can bend the mind - there are 37 million churches around the world. According to the Catholic Encyclopaedia,  the Cenacle (the site of the Last Supper) in Jerusalem was the ‘first Christian church’. Archaeology magazine suggests that the Dura-Europos church in Syria is the oldest surviving church building in the world while Jordan’s Aqaba Church is considered to be the world’s first purpose-built church. Few scholars consider Etchmiadzin Cathedral (Armenia's mother church) as the world’s oldest cathedral.

From the count of 37 million, here we look at some of the most unusual churches in the world.
Macabre decor with human skulls and bones, The Czech Republic 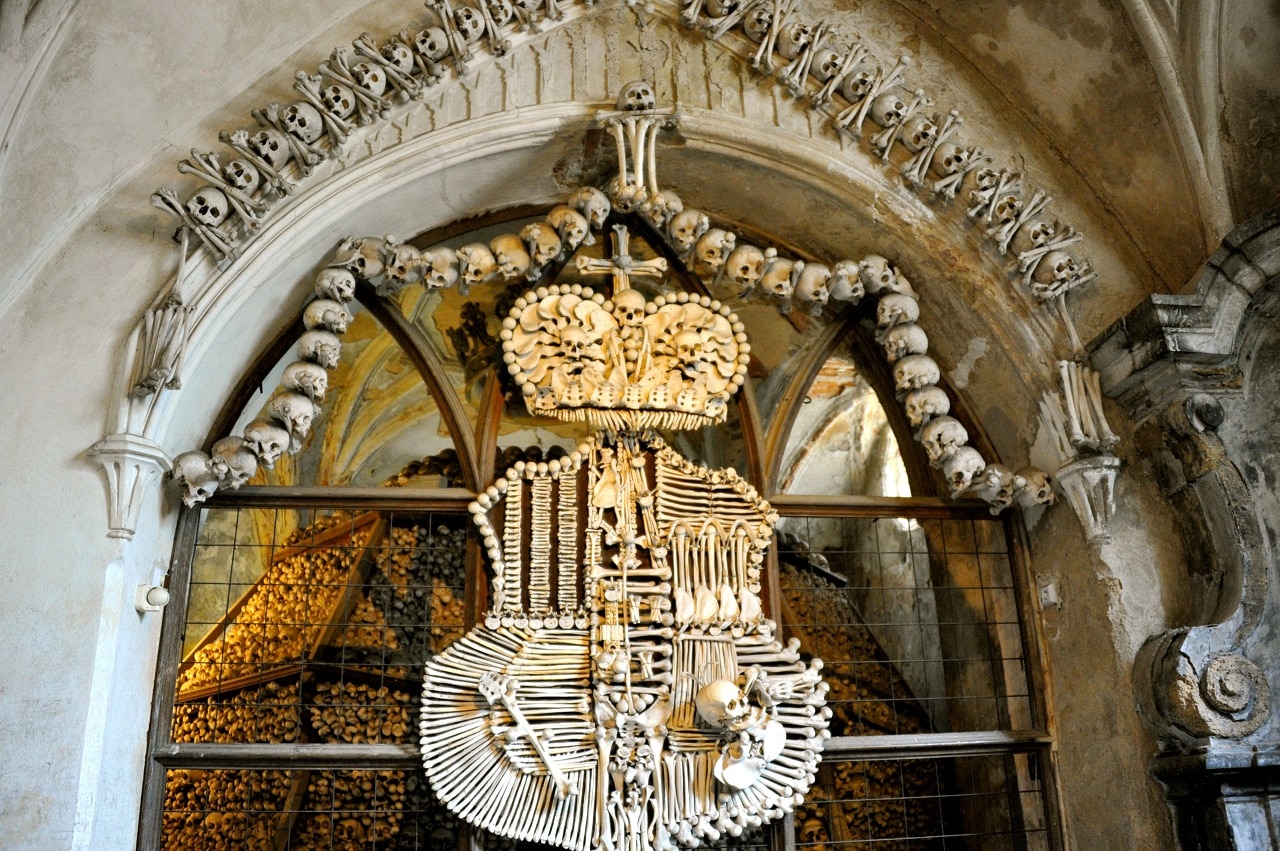 Photo credit: Preeti Verma Lal
Imagine a place of worship adorned with bones of 50,000 people. Real bones of real people. A large chandelier with skulls ranged in artistic combination. Cups and urns made from bones sitting on wall niches. A noble family’s coat of arms containing the image of a raven plucking the eye from a decapitated head - all depicted in bone. In a corner, a pile of bones rising 10 feet high.
Seems too macabre? But that is what the Sedlec Ossuary in Kutná Hora, Czech Republic, is - a church made of human bones. Legend has it that in the 13th century, a monk returned from the Holy Land with some soil and scattered it around the graveyard. Fascinated with the saintly soil, people wanted to be buried there. Too many, as it turned out. With nowhere left to bury the bones, they were integrated into the church decor.
Chapel inside an oak tree, France Photo credit: B Collier
A chapel with no stone or cement. Not even proper walls. Chene Chapelle (Chapel Oak), an ancient chapel located in Allouville-Bellefosse, northern France, is built inside an enormous oak tree, perhaps the oldest known tree in France. The entire place of worship is housed inside an 800-year-old tree hemmed with a spiral staircase.
According to local legend, the oak tree is as old as the kingdom of France and William the Conqueror prayed under its branches before he left for England. A fierce lightning in the 17th century ignited the tree from inside leaving a huge hollow in the living oak. Interpreting it as a divine sign, the local abbot and priest had the shell of the tree converted into a chapel. Many gather here on an annual pilgrimage on August 15, the Feast of the Assumption of the Virgin.
A city with 11 rock-hewn churches, Ethiopia Photo courtesy: Ethiopian Tourism Organisation.
The town of Lalibela in northern Ethiopia is famous for its 11 rock hewn churches dating back to the 12th century. Originally known as Roha, the city was renamed after King Lalibela who commissioned the churches. With only hammers and chisels, these churches were chipped out of solid rock. The most spectacular is the Church of St George which has been excavated 12 meters down. Some of the churches are connected by underground tunnels and twisting mazes and portray a vast array of styles and carvings: Arabesque windows, Grecian-style pillars, the Star of David and the ancient swastika symbol.
Church with the strangest staircase, US Photo credit: Preeti Verma Lal
It is almost never that a carpenter gathers more attention than god. A mysterious carpenter who built a miraculous 22-feet staircase. No central pole. No newel. No discernible means of support. Held together by wooden pegs and glue rather than nails or other hardware, the spruce stairway takes two full turns and rises into the attic loft of Loretto Chapel in Santa Fe, New Mexico, US.
The chapel was completed in 1878, the architect was dead and there was no staircase into the loft. The distressed Loretto nuns beseeched St Joseph – the patron saint of carpenters – to help with a solution for the chapel stairs. On the 9th day of prayer, a carpenter arrived. He worked in private and completed the staircase. And when the happy nuns laid a banquet for him, he disappeared. He took no payment, left behind no name, and never returned. The mystery of the staircase persisted and even today more people step into the chapel for the carpenter’s wizardry than for God’s blessings.
Concrete honeycomb of 21,000 stained glass inlays, Germany Photo credit: Preeti Verma Lal
First built in the 1890s in honour of Wilhelm I, the first German Kaiser, the Kaiser Wilhelm Memorial Church, Berlin, Germany, had five spires and the country’s second largest church bells. The story is that when the church was inaugurated, the five bells rang so loudly that the wolves in the zoo started howling.
Air raids in 1943 damaged the church so badly that the top of the main spire broke off and the roof collapsed. During the renovation, the ruins were integrated into the design. What makes the Memorial Church memorable are the walls are made of a concrete honeycomb containing 21,292 stained glass inlays, with blue as the dominant colour with a dash of ruby red, emerald green and yellow.
Carved out of a rock, Finland 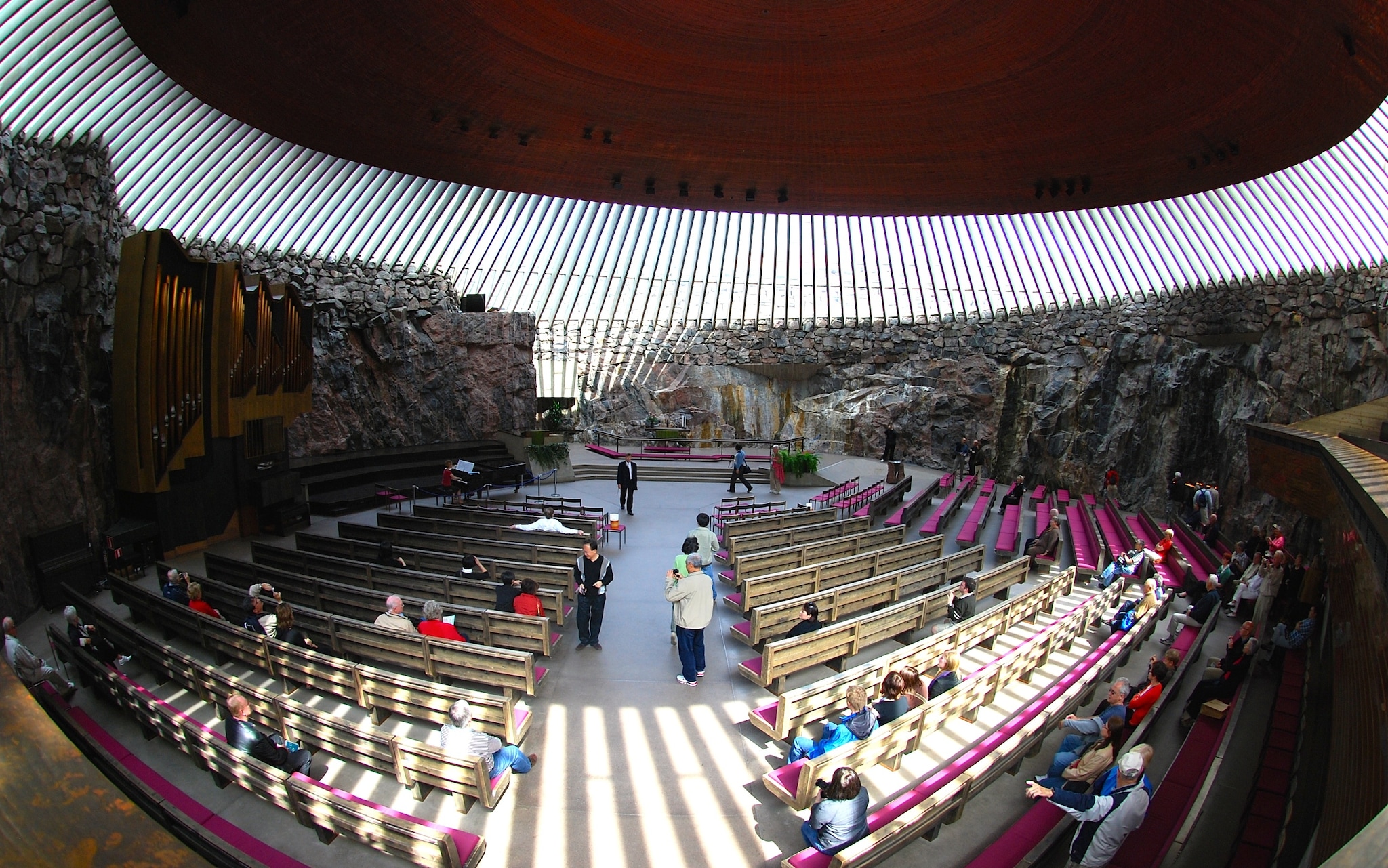 Photo credit: Preeti Verma Lal
Never judge a church by its entrance. If you did, you’d never step into Temppeliaukio Church, Helsinki, Finland, which has such a nondescript entrance that it could pass off as a dreary bus shelter. Concrete and grey. Quarried out of the natural bedrock and designed by architects Timo and Tuomo Suomalainen, the subterranean Rock Church (that is what it is mostly known as) is a beauty - its walls hewn from natural on-site stone formations and a roof made of brilliant copper.
There are no bells in the church, a recording of bells composed by Taneli Kuusisto is played via loudspeakers on the exterior wall. Taking pride of place is the church organ that has 43 stops and 3,001 pipes. The acoustics of the church are so brilliant that it has become a popular concert venue. A floor below the church is a Cold War-era air raid shelter, which now serves as parking.
The oldest church in the US Photo credit: Preeti Verma Lal
In Santa Fe, the city that describes itself as City Different, lies an adobe building next to the oldest house in the US. Built in 1646 and known as the De Vargas Street House, the adobe building rests on part of the foundation of an ancient Indian Pueblo dating from around 1200 AD. On it falls the shadow of San Miguel Mission which was built in 1610 when Santa Fe was founded. Tagged the oldest church in the US, the archaeological investigations beneath the foundation reveal evidence of Native American occupation of the site as early as 1300 AD. Even today, the original walls remain under the stucco exterior.
Preeti Verma Lal is a Goa-based freelance writer/photographer.
Check out our in-depth Market Coverage, Business News & get real-time Stock Market Updates on CNBC-TV18. Also, Watch our channels CNBC-TV18, CNBC Awaaz and CNBC Bajar Live on-the-go!