The sugary and the meaty from Turkey

The sugary and the meaty from Turkey

A 10-day food festival can tire a chef. Any chef. And a 10-day Food Festival can be 7-course fatigue even for a dab hand in a fancy kitchen. But chefs Ibrahim Yaman and Abdullah Olgun of Swissôtel Istanbul have different ingredients in their bones.

A 10-day food festival can tire a chef. Any chef. And a 10-day Food Festival can be 7-course fatigue even for a dab hand in a fancy kitchen. But chefs Ibrahim Yaman and Abdullah Olgun of Swissôtel Istanbul have different ingredients in their bones. They never tire of Turkish food. After a 10-day Turkish Food Festival held in Pullman New Delhi Aerocity in partnership with Turkish Airlines and Swissotel The Bosphorus (Istanbul), the two chefs were still talking kebabs, halva, borek…

Not for them the ordinary kebab - machine minced meat grilled on an open fire. It is Adana kebab that originated in the Turkish city of Adana. This kebab is a tad fussy. You know, the old-maidish type - hand mince lamb meat with zirh (a large mincing knife), pour tail fat (not just any lard, please), load it with Urfa biber (dried Turkish chilli pepper), skewer it into flat metal rods and mangal (grill) over charcoal. That fuss is prosaic but the texture of the Adana can tempt the gods, too. In partnership with Turkish Airlines, Chefs Ibrahim Yaman and Abdullah Olgun of Swissôtel Istanbul curated a 10-day Turkish Food Festival in Pullman New Delhi Aerocity.
On their first visit to India, Chefs Ibrahim Yaman and Abdullah Olgun were talking Turkish food in Pullman’s Pluck hotel. Of İskender kebab, which takes its name from its inventor, İskender Efendi, who lived in Bursa in the late 19th century Ottoman Empire; of borek, the stuffed phyllo bread; muhamarra, the red hot pepper dip; and Irmik halva made with semolina, pine nuts and sugar. Turkey has various versions of the kebab, with Adana and Urfa kebab being two of the most popular.
A 10-day food festival is not enough for Turkish cuisine and the chefs could talk endlessly, relentlessly about Turkish cuisine which is largely a heritage of the Ottoman Empire. I knew not anything of the 45 dishes served at the Ottoman court that is listed in the first-ever kitchen ledger of the imperial palace in Topkapi dating from 1469. So, I hastily narrowed it down to 5 Turkish must-eats and as if on cue, both Yaman and Olgun picked the same names: Babagannush (crushed roasted eggplant & peppers served with freshly baked pita bread and lavash); Haydari (clothed yoghurt with flamed mint & dill served with kebab on side); kebabs (different kinds in different regions); Lahmacun (think of meaty version of cheeseless pizza); and of course, baklava, the most famous dessert. 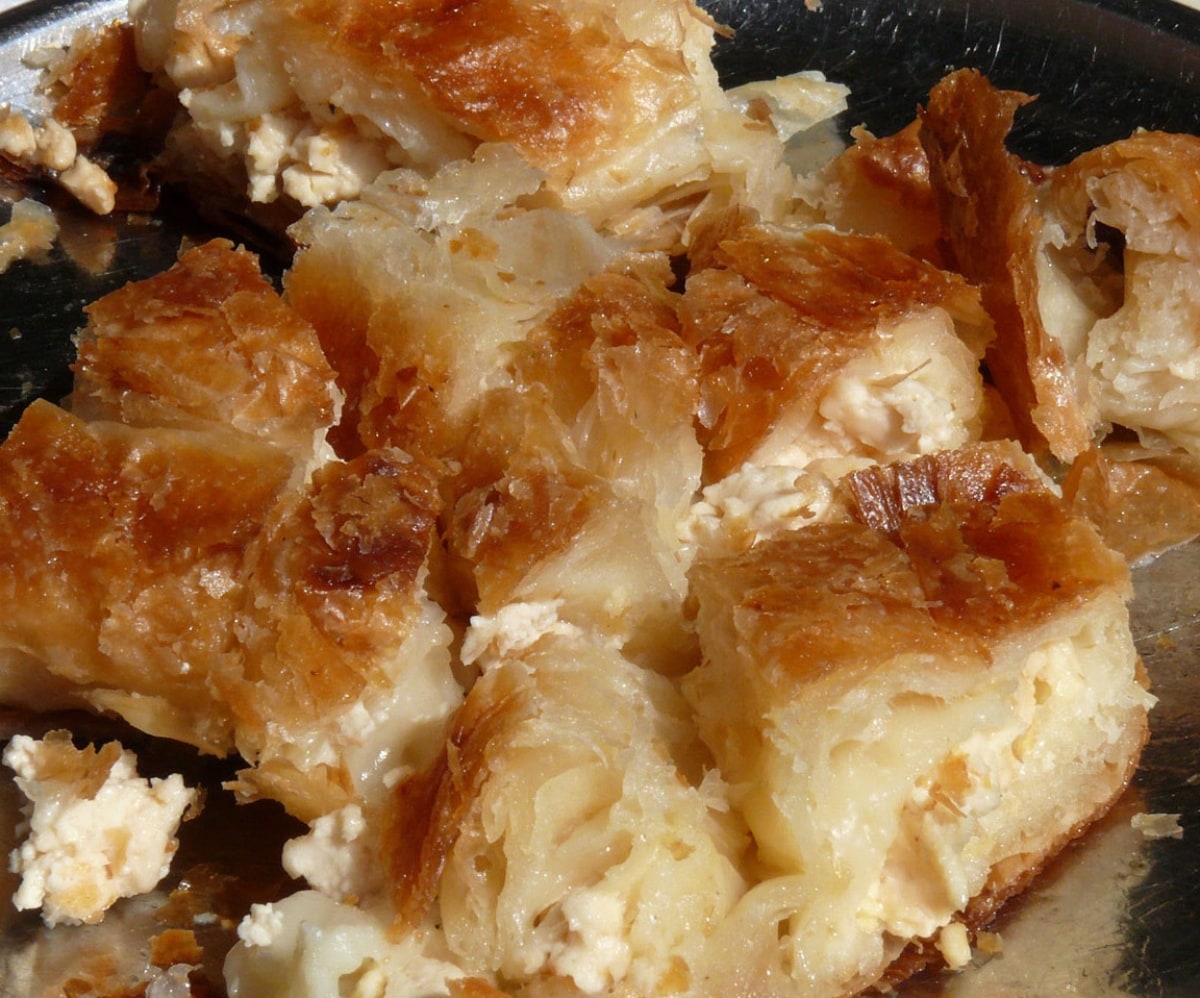 Borek is a stuffed bread.
While other chefs are embracing fusion, chefs Yaman and Olgun are baying for the return of the Ottoman cuisine. In the old Ottoman days, meals usually began with a soup/broth served in a large copper tureen, followed by a meat dish with pilaf, then a cold olive oil dish or a fritter, and concluded with a dessert or fruit. 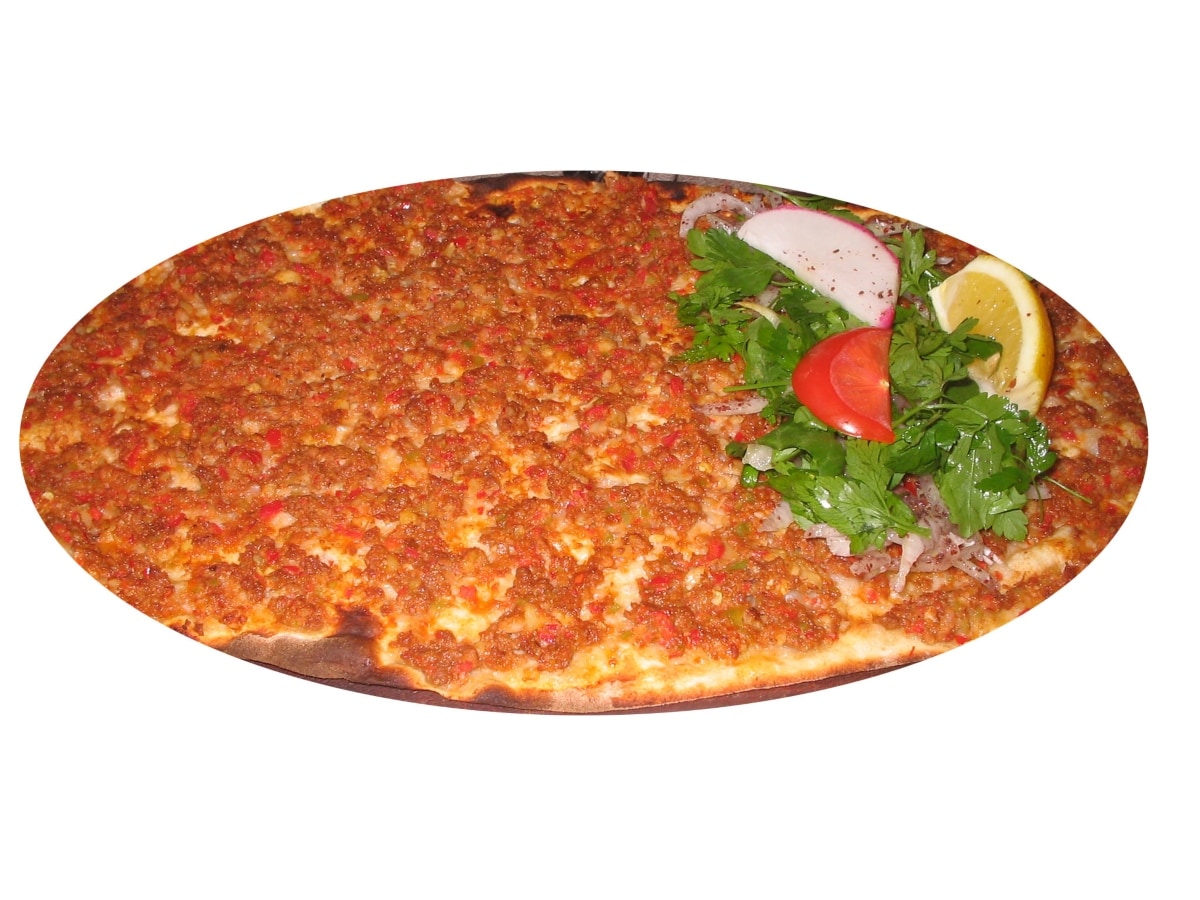 Lahmacun is a meaty version of cheeseless pizza.
According to the Turkey’s Ministry of Culture & Tourism, during the Ottoman reign, at the dinner table, conversation was minimal, laughter was discouraged, lips were never smacked, bread was torn and never bitten, and at the end of the meal everyone threw a grain of salt in their mouth and thanked the person who cooked the meal.
While Turkish cuisine is taking a step back into the magnificence of the Ottomans, Huseyin Ozbek, General Manager, Northern and Eastern India, Turkish Airlines, wants to repeat the curated Turkish Food Festival in India. “Turkish cuisine is well-matched to the Indian taste, and yet is quintessentially Mediterranean in its combination of different ingredients,” he said. Baklava is Turkey’s most famous dessert.
“If the Earth were a single state, Istanbul would be its capital,” Napoleon Bonaparte famously said. Borek would be the morning starter, kebabs would be on every plate every day, halva a chronic stress-buster, and baklava, the only antidote for a broken heart. No, Napoleon did not rustle the menu, I did. Chefs Ibrahim Yaman and Abdullah Olgun would certainly agree.
Check out our in-depth Market Coverage, Business News & get real-time Stock Market Updates on CNBC-TV18. Also, Watch our channels CNBC-TV18, CNBC Awaaz and CNBC Bajar Live on-the-go!