Born in Boston, the capital city of the northeastern state of Massachusetts in the US, Kass Thomas belonged to an unconventional family – both her parents were married to other partners at the time. “Though you could say it was pretty conventional by American standards,” smiles the bestselling author, international motivational speaker and life coach, who has a deep connection with India and heads to the country every year to deliver talks.

“India is one big home for me. It’s part of who I am,” says Kass, who has facilitated over 1,000 classes and assisted over 10,000 people, including American celebrities such as Madonna, Ray Charles, Denzel Washington, Whoopi Goldberg, Michelle Pfeiffer, Miles Davis and Morgan Freeman.

Her keen understanding of human psychology probably has its roots in her childhood brought up among varied and interesting people. While Kass was a small child, her mom Jean – an intellectual, loving, open and joyous woman – worked as a nurse in a Jewish hospital, where she picked up several Yiddish words.

So much so that even young Kass would use words like mashugana to call someone ‘crazy’. She similarly learnt to instinctively respond with “Wa 'alaikum as-salaam”  whenever anyone greeted her with “As-salaam alaikum” because of the many hundreds of times she visited the home of an Indian Muslim doctor who was her mother’s colleague. “I was brought up in such a multicultural environment, I just assumed all this was part of the common vocabulary,” says Kass, whose parents finally married one another when she was six years old. “My father wasn’t educated but he wanted me to be. So he named me Kass after Dr. Nanette Kass Wenger, one of the first women to graduate from Harvard Medical School,” she recalls. Sensitive, talkative and curious as a child, Kass graduated from the Boston Latin School – the oldest public school in America established in 1635 but where girls were allowed only a few years before Kass joined – and then moved to New York to earn her Bachelor’s degree in journalism and her Master’s in theatre management.

Mingling with students from different backgrounds – Chinese, Irish, Indian, Italian, Japanese – and travelling around the world in those years helped her pick up various languages and learn more about their cultures. In 1999, when she was 34, Kass married an Italian, Marco Corbelli, and moved with him to Rome.

In 2003, she learnt Access Consciousness, a life-transformation philosophy developed in the US by Gary Douglas and Dain Heer. It fit her optimistic, non-judgemental and compassionate personality like a glove. Soon she was giving talks and conducting workshops around the world. Kass and her husband of two decades, Marco Corbelli

She also published her book, 7 Steps to Flawless Communication, encapsulating her life’s biggest lessons in self-improvement and personal growth. The book was an instant bestseller and was translated to 16 languages, including Hindi.

There was something about India that both attracted and frightened Kass as a younger woman. “I thought I’d have to be very spiritual before I went there,” she narrates. Instead, India came to her. “The name Rattan Deep Singh popped up every single time I held my online Access workshops,” she recalls. “I didn’t even realise it was a real person, I thought it was a bug in the computer.” She was pleasantly surprised later to meet Rattan Deep and his wife at an Access event in Jaipur in 2015.

“Rattan Deep led me to a table around which 12 people sat. Each one of them – a total stranger – thanked me for being who I am,” says Kass, her eyes softening in remembrance. “They shared their experiences of hearing my talks. My heart just exploded,” she says, recalling her first experience of India, and how she fell in love with the country.

“Now I come once or twice every year. I love everything Indian – the people, the food, the smells.” Kass even has her personal seamstress in Mumbai, and makes sure to pick up an outfit from her favourite designer Ritu Kumar while she’s in town.

At her first workshop in Delhi – part of a nine-week tour of India – Kass instructed participants to add “up until now” whenever they shared their problems in the class. The little phrase electrified the atmosphere in the room almost instantly. 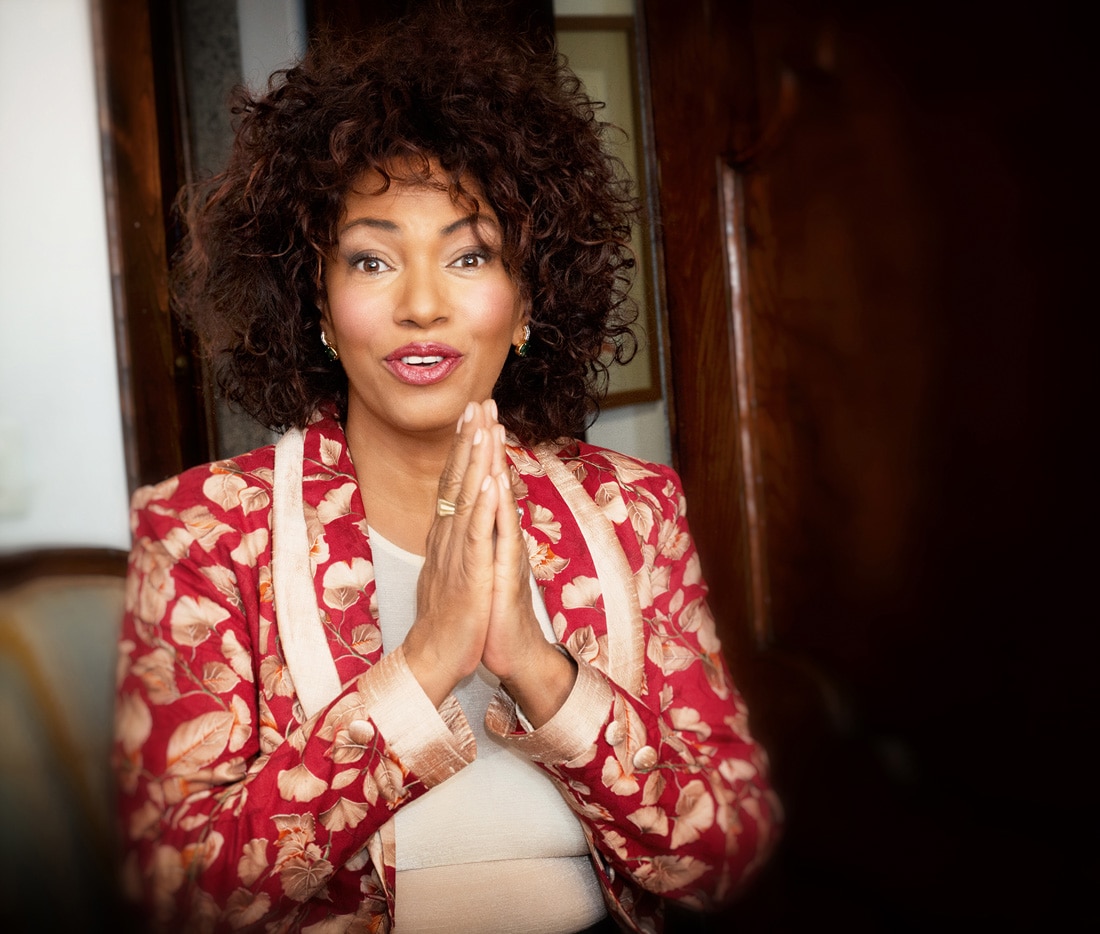 Later, participants expressed their gratitude at Kass’s being “present from the heart” and not just as a speaker on a pedestal. “I started crying when I heard that. I never expected to perceive success with tears of gratitude. It never shows up the way you think,” she muses.

She exhorts Indian women to internalise their external beauty and to realise how special they are. “Indian women care for everyone else, and even for their personal appearance but there’s often a gap when it comes to seeing their inner beauty. Stop criticising yourself all the time,” she says.

She suggests women read the first chapter from her book: “It’s called ‘Show me the magic’. It’s actually a request to the universe to allow you to see your unique brand of magic.”

Kass has a hypnotic way of speaking, looking deep into your soul as she allows words of ancient wisdom pour from her lips. “If you’re waiting for the perfect circumstances to arrive before you can be happy, you are not honouring the perfection of the present moment,” she says meaningfully. There is indeed a kind of perfection in the moment Kass speaks.

Kass is in Mumbai this month and will give a talk at eShe’s Shine Your Light personal-growth workshop for women on July 20.