Siona Benjamin: From Mumbai to Manhattan

Siona Benjamin, the noted Indian-Jewish artist, left Bombay, now Mumbai, decades ago for America but the colours and ethos of India have become embedded into her art and her American life. Her unique works which are populated with blue figures reminiscent of the colour of Krishna, the sky and water have been embraced by art collectors in America, Israel and India. Her paintings are inspired by her own Jewish faith but also the myriads of religions, cultures, languages and people which populated the India of her growing up years.

She grew up influenced by Judaism, Hinduism, Islam, Christianity, and Zoroastrianism, leading to universal themes that embody her work. She has created a 16-foot diameter mosaic floor design for a synagogue with 320 porcelain tiles which shows these many influences. She has also done commissions for hotels, public and private works as well as Ketubahs (Jewish illuminated marriage contracts) made with gouache and mixed media on paper. Her current commission is for a synagogue in Pennsylvania for a Torah Ark curtain, to be painted here and printed in India.

India is enmeshed in her passions and her professional life as an artist and speaker. “I am inspired by the traditional styles of Indian/Persian miniature painting and Christian and Jewish illuminated manuscripts,” she says. “I blend these ancient forms with contemporary pop cultural elements to create my own vocabulary.” She also takes inspiration from Jewish and Indian myths, especially the tales of Kali and Krishna. She says: “These blue-skinned characters tell - or mostly retell  -stories that are divine in nature but very human in drama.”

Siona Benjamin was born and raised in Bandra, which happens to be the home of Hollywood stars, as she likes to tell people and she certainly got to see a lot of Hindi films in her childhood.  Her father was a manager for India Steamship Company - a cargo shipping company, and her mother ran a private school which was attended among others, by the children of the stars.

As a child, Bandra was her world but her roots actually lay across the world in another ancient culture, that of Judaism. Siona Benjamin is a Bene Israel Jew  and one of her grandmothers came to India from Quetta, Pakistan.  There are three distinct Jewish communities in India - The Bene-Israel which has remained the largest, the Cochini Jews who once formed the second largest group and the Iraqi Jews who now form the second largest community. There are about 5,000 Bene Israel left in India, as most have immigrated to Israel, the US and Canada.

“My parents were staunchly Jewish and proud of it - especially since India was one of the only countries where there no anti-Semitism against the Jews,” recalls Benjamin. “I remember preparations for the Eliyahu Hannabi prayer, the Sabbath and large pots of Jewish halwa (sweets) made out of coconut milk for the Rosh Hannah and Yom Kippur festivals.” Siona's parents in the Old Bombay

Art was very much a part of Benjamin’s life, and after studying at the JJ School of Arts, she came to the US in 1986. She has two MFA degrees in painting and theater set design, and was awarded a Fulbright Fellowship in 2011 to India and a second Fulbright fellowship in 2016-17 to Israel.

Her visit to a small Jewish community in Mumbai is chronicled in the documentary ‘Blue like Me.’ Siona’s blue dancers are her most popular works of installation and collaborative art. She has partnered with dancers and choreographers around the world to bring her cross cultural art to life through dance. Other mixed media installations include Lilith in the New World; floor-to-ceiling installations…

Siona Benjamin grew up in a Bombay where different communities lived in close proximity and shared their cultures with each other. In her soon to be published book, she shares that friendships were across cultures and religions, sharing platters of sweets from Jewish, Islamic and Christian festival celebrations.

Her art speaks to people across borders. Indian art collectors are also reaching out to her and she will also be showing her art in a gallery in Mumbai. Looking at her multicultural art with its turquoise blue tells Indians so much about themselves and their all-embracing secular heritage. Says Benjamin “I exhibit everywhere as I do not want to be pigeon-holed but my essence of being Indian, Jewish and American is the core of me.” 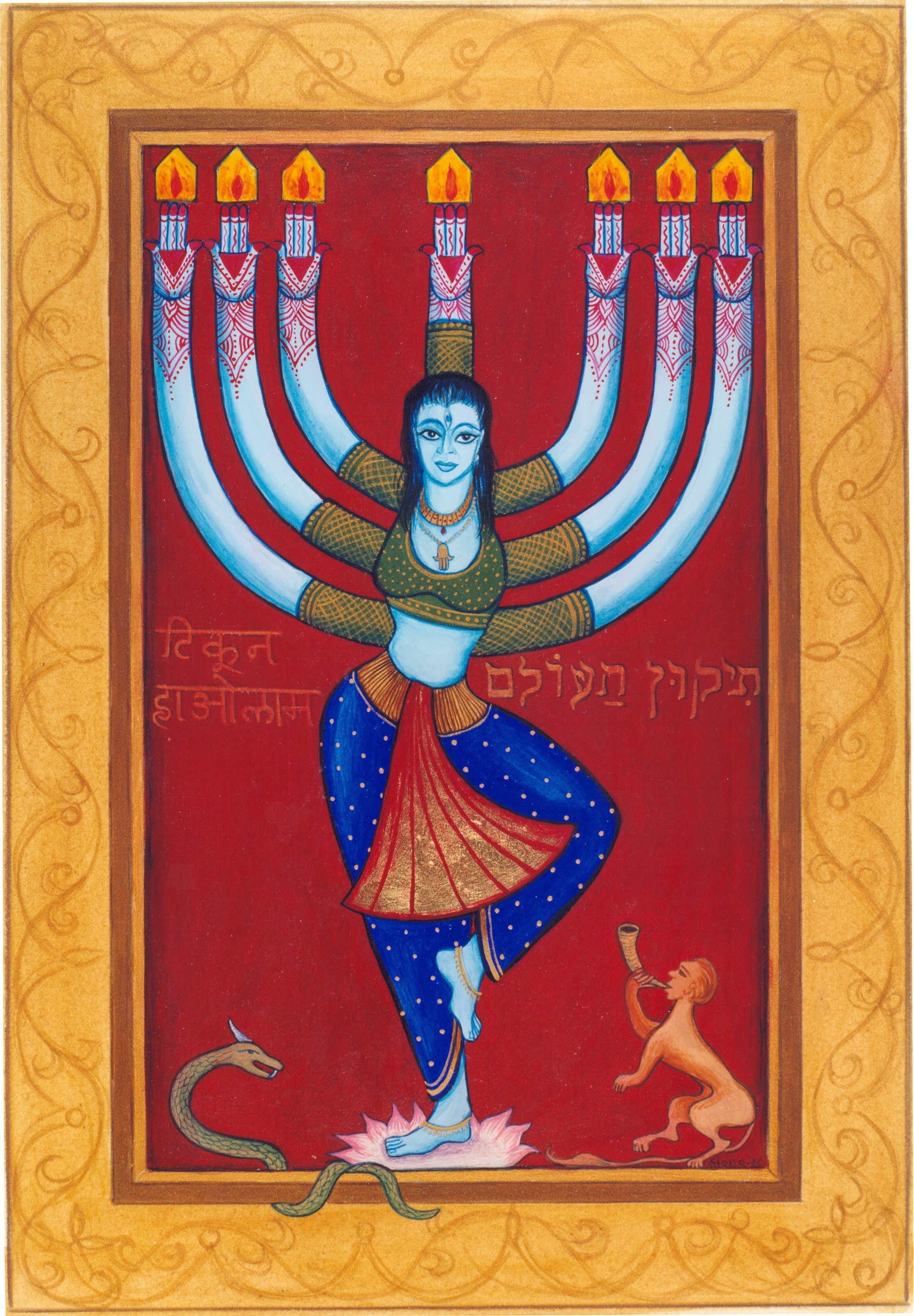 Her Liberty art series which is about America could be about today’s India too. She describes it:  “I have made beautiful textures and colors and contrasted it with falling, crouching, flying, sleeping, tired, tempest tossed, homeless, and vulnerable bodies. Washed ashore or cast into the ocean, huddled or yearning to breathe free… again, or for the first time. These blue foreign bodies yearn to lift their lamps beside their own golden thresholds.”

How much does she think she was impacted by growing up in India and what world view did it give her? She says: “Having grown up in predominantly Hindu and Muslim society, having been educated in Catholic and Zoroastrian schools, being raised Jewish and now living in America, I have always had to reflect upon the cultural boundary zones in which I have lived.”

She recalls growing up as the daughter of a Jewish teacher who believed in equality and the importance of accepting ‘the Other’. Bombay was also a place where unlikely friendships formed across religions. In her upcoming book, ‘Growing up Jewish in India,’ she writes: “When my grandmother decided to immigrate to Israel, all of her Muslim neighbours and friends came to say a tear-filled goodbye to her, telling her that they would miss her like a sister. The mosque and the synagogue were right next to each other, you see, and my father knew the Muslim call to prayer by heart as he had heard it every day growing up in that neighbourhood.”

What does she think about what’s happening in today’s India? She says, “I feel sad that that utopia that I grew up in where I was really taught to believe that all cultures and all religions are so similar - that age and that place are gone.”  However, she takes comfort from the similarities of  Hindu mythology of the world being a ‘kumba’ or pot and the Rabbinic belief of  “Tikkun olam” (Hebrew for “repairing the world”) – both connote social action and the pursuit of social justice to repair the world’s broken pot out of which all the virtues have spilled out.

“It is humanity’s task to reconstruct this vessel, which is done through various ethical, spiritual, intellectual and aesthetic acts that re-establish values in our world,” she says. “By making images that contribute to this “Tikkun” I am  participating in my own small way in this process of “repair.”

Through her art Siona Benjamin hopes to do her bit in eradicating hateful attitudes toward race and religion everywhere.