Rani Khanam, the Sufi who dares to dance Kathak to Islamic verses

Updated : December 12, 2019 08:55 PM IST
A Kathak exponent, Rani Khanam has also worked with living legends of Sufi mystic musicians from Turkey, Cairo, Bosnia and Morocco.
Since the time I was born, I have been hearing the Azaan and studying verses of the Quran, says Rani Khanam.

Rani Khanam is the only Indian Muslim classical dancer of note who has dared to dance to Islamic verses. In the past, Rani Khanam has performed a number of issue-based dance productions about women's rights, HIV/AIDS, gender equality and disability.

A Kathak exponent, she has also worked with living legends of Sufi mystic musicians from Turkey, Cairo, Bosnia and Morocco. Along with her ensemble, Rani Khanam has performed at reputed national and international festivals. We ask her about her unconventional career path.

Coming from a conservative Muslim society, what challenges did you have to face to become a Kathak dancer?

Since the time I was born, I have been hearing the Azaan and studying verses of the Quran. This has created divine vibrations in my body and made me more spiritual. There is movement in the readings of the Quran’s verses. I have been dancing since childhood. With this strong background, the movements have evolved automatically. I was told that dancing is banned in Islam. I was the first Muslim girl from my orthodox community to take out my veil (burkha) against the will of the community. It was my innermost desire to dance, to free myself from the suppression. I started dancing within and chose to learn Kathak. My family is a follower of the Chishtiya Silsila, which was founded by Kwaja Moin-ud-Din Chishti in India. Since childhood, I would participate annually in the Ajmer Sharif's Urs. I found that Sufis who followed the Chistiya order were not against adapting the ideas and language of Hindu saints of the Bhakti cult. They even went so far as to use the Hindi language for Islamic devotional songs.

I watched the nightlong Sama-e-Mehfil, the 800-year-old traditional festival of Sufi worship, involving music and dance. I also watched qawwalis, and often saw ordinary listeners, Khadims and the Sufis, who would transform into Wajad, a trance-like state where they feel at one with God (generally considered to be the height of spiritual ecstasy within Islam).

You are the only Indian Muslim Kathak classical dancer of distinction who braved to dance on Islamic verses and Sufiana verses of mystic Sufi poets. Tell us more about this 'Sufi Kathak' and the Islamic verses, Sufiana poets, Qawwalis, Indo-Persian ghazals and Sufi folk compositions that influence your dance.

I believe the essence of Islam in its purest aspect has been embedded in Sufism. Actually, Sufi is a way of life, like Sanatan Dharma. There are no rules and regulations – there is only a spiritual thought, a philosophy that lights up the path we are to follow for eternal happiness. The prerequisite to this is a mind and body free of murky material issues. The journey on the Sufi path is an inward one. Every day, I embark on this inward travel. It’s like a churning one has to do within oneself to spill out the accumulated negativity contributed by external stimuli. 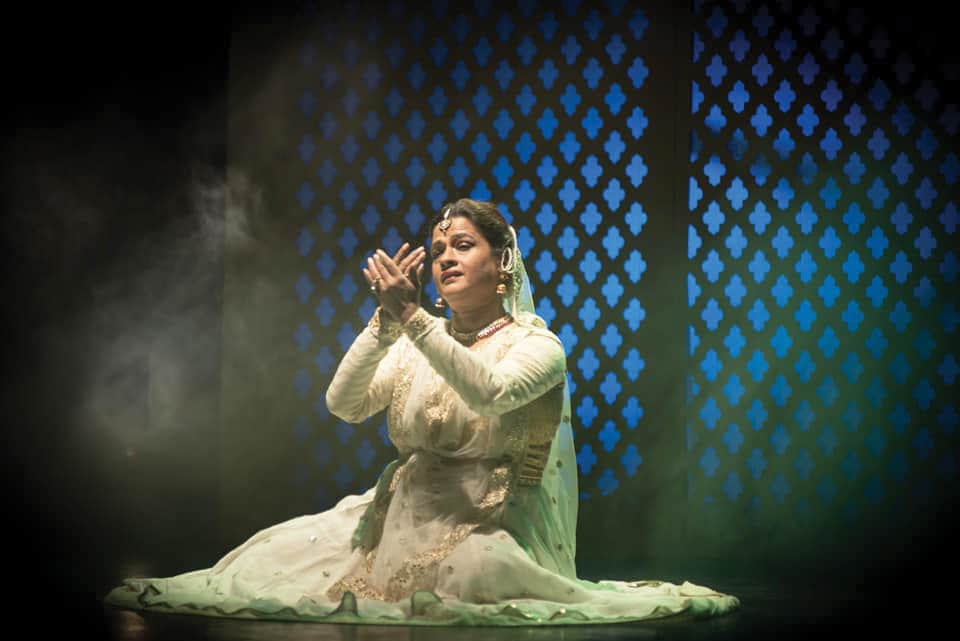 I don’t believe in Sufi Kathak. There is no such dance form that has evolved. Sufi is an expression of the inner soul, and Kathak is a classical dance form with 2,000 years of India’s culture and its philosophy. Artists innovate new thoughts or create vocabularies in the arts. To create new forms and culture, it takes hundreds of years.

Please tell us about the unique repertoire of sacred dances based on Sufi and Islamic verses that you perform from time to time.

During my training years, I learnt many facts about Kathak. It was also based on Hindu devotional tradition with the courtly influence of Islam. History reveals that a certain Persian elegance had reformed the Kathak technique during the medieval period. I have created new movements and techniques, which fulfil all aspects of Islamic concepts and thought. In the real sense, this represents the great Sufi traditions of the Chishtiya Silsila of India and other parts of the world. Regarding the Sufiana essence in Kathak, I felt that it is not decorative and entertaining in its repertoire. The soul of dance is completely divine in nature and witnessed through divine forces in the universe. It elevates the soul to a different mystical plane. Sufiana has evolved over the ages after a lot of exploration and study, which includes research and collaboration with the legends and experts of Sufi across the Islamic world.

After mastering the best of the traditional Kathak dance in the Lucknow style, my research penetrated deep into the subject matter of varied and impressive influences of Islamic culture on the dance form. Through my dance, I explore the inner joy and the mystic quest of Sufism, and have created a new vocabulary in Kathak (the Lucknow dance style repertoires).